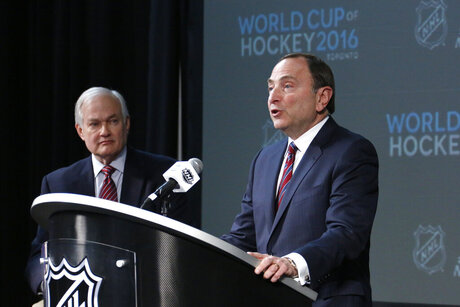 "No hitting, and no elbows," Fasel joked in a telephone interview with The Associated Press.

Bettman described the meeting as "constructive and candid."

"Still lots of issues," Bettman wrote in an email to the AP.

Fasel said his job is to raise funds for the players' transportation and insurance. The International Olympic Committee does not want to cover those costs as it has the previous five Olympics. Fasel hopes to persuade the IOC to financially support the NHL's participation.

"It is the only league that shuts down to participate in the Winter or Summer Olympics," Fasel said.

Bettman and NHL Deputy Commissioner Bill Daly declined to comment on a Sportsnet report indicating the league has offered to sign off on allowing players to go for gold in South Korea in exchange for the union not opting out of the collective bargaining agreement in September 2019, which would in effect extend the deal for three years.

"There have been some suggestions that could be construed that that discussion would be worth having," Fehr told reporters in New York. "Obviously, we discuss that with players. We have begun that process, but we're a long way from done."

Bettman has said a decision would need to be made by early January at the latest, giving the league time to create its 2017-18 schedule with or without a two-plus week break for the Olympics.

Fasel isn't in a rush.

"We can wait longer because we want to do all we can to keep best-on-best hockey in the Olympics," Fasel said.

NHL and NHLPA officials recently visited the Olympic site in Pyeongchang, South Korea, and have deemed it suitable for international competition.

Whether the world's best hockey players go to South Korea in about 15 months is up to the league and union, though Russian superstar Alexander Ovechkin of the Washington Capitals has said he will go even if there isn't an agreement.

The IOC spent about $14 million to cover travel and insurance costs for NHL players for the 2014 Olympics in Sochi, Russia. Fasel has said the bill would be about $10 million for the next Olympics because it won't be necessary to charter planes to South Korea as it was to get players to Sochi.

The NHL hasn't sounded eager about going to South Korea, but does appear very interested in tapping into China's huge market in 2022.

"When the IOC awarded the Beijing Games, it certainly created a bigger opportunity than we thought existed potentially before," Daly said in September. "But it is also possible that you don't go to one Olympics and you do go to the other. I don't think anybody has ruled that out as a possibility."

Fasel has been trying to persuade national Olympic committees and hockey federations to donate funds to keep the game's best players on the biggest stage in sports. He acknowledged the IIHF could possibly use some of the $40 million it gets from the IOC every four years and make cuts from its development programs for boys and girls.

"It's not going to be easy to get this done, but that's my job," Fasel said.