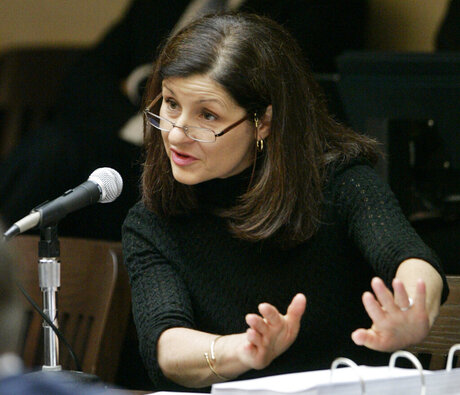 One of the world's leading anti-doping scientists cringes at finger-pointing toward the World Anti-Doping Agency by leaders in international sports and tells The Associated Press that with so much conflict, "the only people who can be happy these days are the dopers and the cheaters."

Christiane Ayotte, the director of the WADA-accredited anti-doping laboratory in Montreal, said in an interview with AP this week that she is wary of the anti-doping summit the International Olympic Committee is holding Saturday — a meeting at which the future of the drug-fighting movement will be discussed. The summit will include only one representative from WADA: President Craig Reedie , who also serves as an IOC member.

"What's the plan? What's the goal? Who is invited and what's going to happen?" Ayotte asks. "What we really need to do is regroup and show a united front."

The summit will include several IOC members, along with presidents of the American, Russian and Chinese Olympic committees and heads of some of the world's biggest Olympic sports. Top on the agenda is a proposal to make the anti-doping system separate from the individual sports federations , most of which operate their own anti-doping programs under WADA guidelines.

A different set of IOC members attended a similar summit that WADA held last month , but they identified different priorities, including bringing more funds into the agency to allow it to bolster its investigative and sanctioning powers, and improving its system for allowing whistle-blowers to come forward.

Ayotte said experts in the anti-doping movement are in the best position to make long-term decisions about WADA, which receives half of its funding from the IOC and half from governments around the world. She described the IOC as a group that "gets into testing every two years (at the Olympics), and otherwise, they're not there. For us, this is our everyday life."

WADA has blamed its lack of resources and authority for its slow response to Russian whistle-blowers who exposed the widespread, state-sponsored cheating that investigations went on to show had been going on for years in their home country.

That, along with revelations from now-deposed Russian lab director Grigory Rodchenkov about a government-backed scheme that undermined testing at the Sochi Olympics, led to investigations of Russia's sports and anti-doping programs, which eventually led WADA to recommend Russia's ouster from the Rio de Janeiro Olympics. IOC president Thomas Bach led a move against that sanction, instead choosing a path that allowed 271 Russians — about 70 percent of its proposed roster — to compete.

That marked the beginning of a fracture between IOC and WADA leaders, with Bach and others suggesting that WADA's slow action allowed the Russian schemes to flourish.

Most recently, IOC member Juan Antonio Samaranch Jr. told a Spanish newspaper: "We were very critical of WADA and we will continue to be. They are responsible for what goes on inside international laboratories but their labs in Sochi and Moscow were like Sodom and Gomorrah."

Ayotte, who assisted at the Sochi lab both before and during the 2014 Olympics, described a collegial relationship with Rodchenkov, who gave the impression that many of the problems identified at the lab before the Olympics were being corrected.

All the while, however, "they were laughing in our face. We were shocked. We can never pardon or forget what happened there," Ayotte said.

Ayotte isn't alone in decrying the discord between the IOC and WADA. Beckie Scott, who chairs the WADA athlete commission, wrote an op-ed Wednesday noting that, "Almost every day, someone new from the Olympic family takes to the media with the critical claim that the global anti-doping 'system is broken.'"

IOC members Sergei Bubka and Gerardo Werthein have also been critical of WADA in recent weeks.

A letter published by the Institute of National Anti-Doping Organizations decried the framing of the Russian doping problem as a political issue and said the IOC "must commit to becoming part of the solution and, not through denial and equivocation continue to exacerbate the problem."

Ayotte, who is president of a worldwide group of lab directors, said she came from a meeting earlier this week where concern over the IOC undermining of WADA was growing.

"We're very worried about what will come up with regard to the power and the mandate of WADA," she said. "Yes, we need to make some accommodations and some changes, but this is not the time to tear everything down and start again."