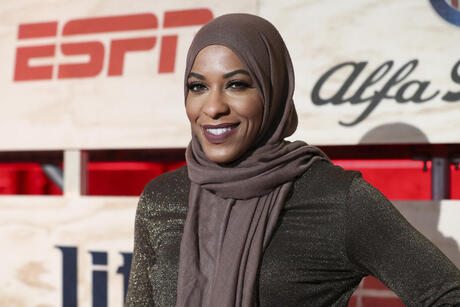 By: JOHN CARUCCI (AP)
HOUSTONCopyright 2020 The Associated Press. All rights reserved. This material may not be published, broadcast, rewritten or redistributed.
29.7633-95.3633

HOUSTON (AP) — Ibtihaj Muhammad, who won a bronze medal for the United States during the Rio Olympics, said she's hopeful that the country will become more inclusive, but right now, she thinks more work is needed.

The Muslim-American fencer, who medaled in the team sabre event last summer, spoke on the red carpet at Friday night's ESPN Super Bowl party in Houston. When asked about President Donald Trump's executive order that banned visitors from seven Muslim-majority countries, she told The Associated Press: "I think to remember what makes our country great, and it's diversity. That's what our nation was built upon, and I think that we have to remember our strong suit as a nation and to want for one another what we want for ourselves, and that's safety."

Muhammad sees that as a start, and feels optimistic the situation will improve.

As for her pick on Sunday, Muhammad said: "I don't have a dog in this fight, but I am rooting for the (Atlanta) Falcons this weekend."

The Falcons face off against the New England Patriots on Sunday.