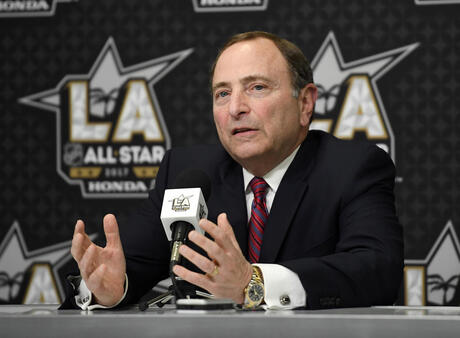 By: GREG BEACHAM (AP)
LOS ANGELESCopyright 2020 The Associated Press. All rights reserved. This material may not be published, broadcast, rewritten or redistributed.
34.0522-118.244

LOS ANGELES (AP) — The NHL is likely to skip the Pyeongchang Olympics unless something big changes in the next few months.

In the league's most strident comments yet on this quadrennial issue, Daly flatly said the NHL's Board of Governors doesn't want to shut down the league to allow its players to participate in South Korea. The owners' minds would have to be changed by something dramatic, but Daly doesn't know what that new ingredient would be.

"If the status quo remains, I don't expect us to be in the Olympics," Daly said.

The league and the International Ice Hockey Federation have no firm deadline to decide whether NHL players will participate in their sixth consecutive Olympics, but the final decision has already been left for later than in previous years.

The parties waited until June 2013 to execute their agreement for the Sochi Games, but the decision was made several months earlier. The NHL prefers to release its yearly schedule in June, which means a final decision might not be made until summer.

While the IIHF has found the money to cover the costs of a Pyeongchang trip after some initial reluctance, the NHL has numerous concerns that aren't overwhelmed by the excitement of nurturing the game overseas and exposing its biggest investments to injury.

Commissioner Gary Bettman drove the NHL's decision to participate in its first Olympics in 1998, but the league sees fewer reasons to shut down for three weeks while playing a compressed schedule. Bettman said the issue "got about 10 seconds of discussion" at the board meeting Saturday because nothing has changed.

"I think the realities of Olympic participation are more apparent to our board now, and I think it just leads to less enthusiasm about the disruption," Daly said. "Quite frankly, we don't see what the benefit is from ... the league standpoint anyway with respect to league participation, so that's the challenge. As Gary said numerous times, if there was a compelling reason that we could bring to the board that this is something we should do again in Korea, then we present it to the board and see what they would have to say."

Daly acknowledged that geography plays a role in the board's position: Pyeongchang is 14 hours ahead of New York, which will mean difficult game times for viewers in North America. The league also doesn't anticipate major growth in its game from playing in South Korea.

"I think on occasion in the past, it has" produced growth in the game to play in the Olympics, Daly said. "I'm not sure it necessarily would in South Korea. Time and exposure, all those issues related to (being) a long way away."

The IOC and the IIHF benefit enormously in exposure with the NHL's participation. Bettman and IIHF President Rene Fasel are expected to meet up this weekend

The players gathered in Los Angeles for All-Star weekend are unanimously hopeful they'll be allowed to play, but they're aware of the increasingly strident tone against the games being taken by their owners.

"I don't think you should be able to pick and choose what Olympics you go to," said New Jersey forward Taylor Hall, who has been to world championships for Canada, but not the Olympics. "That's not what the Olympics stand for. If you ever talk to anyone that has participated in the Olympics, whether it is a hockey player or a javelin thrower, it's a special place. It's something that I would love to be a part of, and I wouldn't want to see it taken away because the NHL didn't want to go to South Korea. It's special no matter what."

Washington Capitals captain Alex Ovechkin has previously said that he would play for Russia in Pyeongchang even if the league didn't shut down. He didn't repeat that declaration Saturday, one day after being recognized as one of the 100 greatest players in NHL history, but he left no doubt he wants to be there.