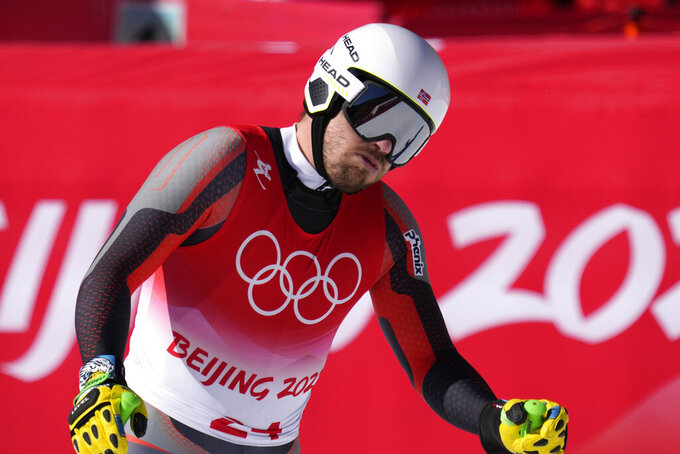 Kjetil Jansrud of Norway reacts after finishing the the men's super-G at the 2022 Winter Olympics, Tuesday, Feb. 8, 2022, in the Yanqing district of Beijing. (AP Photo/Luca Bruno)

The 36-year-old Jansrud wrote on Instagram on Monday that he will finish at the course where he got the first of his 23 World Cup wins.

“I am, however, very glad I get to choose to retire in Kvitfjell, where I won my first in 2012 and where I’ve raced in front of family and friends every year since,” Jansrud wrote.

Jansrud is retiring weeks after making an unexpected recovery from a knee injury to compete at the Beijing Olympics, where he was seeking a medal from a fourth straight Winter Games.

He took gold in super-G at the 2014 Sochi Olympics and also won two silvers and two bronzes between 2010 and 2018 — twice sharing a podium with friend and teammate Aksel Lund Svindal.

Jansrud also won a world championships title in downhill in 2019, and topped the World Cup downhill standings in the 2014-15 season. He earned three more crystal globe trophies as the season-long champion in super-G.

A devoted fan of English soccer club Liverpool, Jansrud built a reputation as a smart and thoughtful athlete.

“In these perilous times, my retirement — and this post — feels meaningless,” Jansrud wrote in his post. “My thoughts and hopes are with the Ukrainian people. Stay strong.”