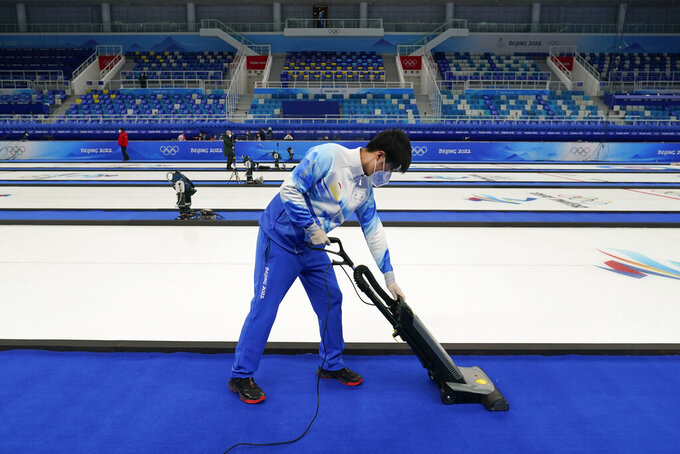 A volunteer vacuums the floor at the National Aquatics Center, a venue for curling events at the 2022 Winter Olympics, Saturday, Jan. 29, 2022, in Beijing. (AP Photo/Jae C. Hong)

BEIJING (AP) — A day before the opening ceremony, Beijing's 12 Olympic venues were mostly in a state of calm before the storm.

Not a literal storm, of course — not in this arid winter climate.

That's what all the fake snow is for.

In the mountains and the city, much of this week's final preparations revolved around managing the roughly 800 Olympic-sized swimming pools' worth of water needed to create enough snow to support these Games.

At the downhill ski course in Yanqing, the perimeter of the bright, white course contrasts with the brown and gray mountain on which it winds. No snow on the surrounding vista, either — just mud-colored peaks in every direction.

Massive irrigation systems were built to sustain the snow-making machines, like the one spraying wintry mix on a grassy hillside in Zhangjiakou during cross-country skiing practice.

Fake snow in the halfpipe. Fake snow on the ski jump. Fake snow at the Big Air venue built atop a repurposed steel mill. It's even under the volunteers making snow angels for a photo.

At these Games, happening amid the coronavirus pandemic, there's work to keep participants safe, too. Good luck finding a volunteer without a facemask — medical-grade coverings are the standard here. Even in the open air, workers in protective suits are spraying disinfectant, like outside a Beijing hotel.

For a few hours Friday, the world will turn its attention on the Bird's Nest, where opening ceremony rehersals were run early in the week. From there, the focus shifts out to the tracks, jumps and slopes where the snow will be fake but at least the chance for gold will be real.