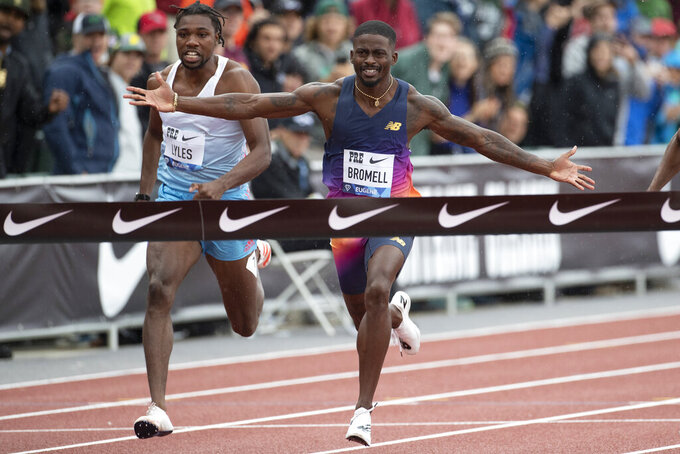 The United States' Trayvon Bromell, right, wins the men's 100 meters as Noah Lyles runs in the next lane during the Prefontaine Classic track and field meet Saturday, May 28, 2022, in Eugene, Ore. (AP Photo/Amanda Loman)

EUGENE, Ore. (AP) — Ryan Crouser can think of no better place to set the shot put world record -- again -- than at home.

The Oregon native and two-time Olympic gold medalist is among the elite athletes eyeing the world outdoor championships this summer in Eugene.

Crouser won the shot put at the Prefontaine Classic last weekend at Hayward Field, the same stadium where he set the world record in the event last summer. And it's the same place he'll attempt to best his own mark this summer — competing first at the national championships and then at the worlds.

Eugene is gearing up for international track and field's biggest event outside the Olympics, scheduled for July 15-24 in the city known as Track Town.

Crouser, who won the silver medal at the last world championships in Doha, couldn't hide his excitement over competing in his home state. It is the first time the worlds will be held on U.S. soil.

The Pre provided just a snapshot of what the worlds will bring to Eugene this summer. The stadium on the University of Oregon campus underwent a $270 million makeover starting in 2018 in anticipation of the event, which was pushed back from 2021 to this year because of the COVID-19 pandemic.

But first, many of the sport's biggest stars will have to earn their spot at worlds by finishing well at national championships. The U.S. event is set for June 23-26 at Hayward.

American sprinter Trayvon Bromell will be one of those athletes vying for a spot at worlds — and a bit of redemption.

Bromell won the 100 meters at the U.S. Olympic trials last summer. He was widely expected to do well in Tokyo — especially after Usain Bolt declared him the man to beat. But Bromell failed to advance to the Olympic final.

This year he wants to show he can rise to the occasion.

Jamaican sprinter Elaine Thompson-Herah, who won gold in both the 100 and 200, as well as the 4x100 relay in Tokyo, is recovering from a shoulder injury but feels she should be ready for her country's national championships later this month.

“I am a fighter, and every champion has something that they're fighting or going through. We're putting our bodies through something that hasn't been done before, but it's my job and I'm just fighting and doing what I love,” she said.

Thompson-Herah has her aim on Florence Griffith-Joyner’s world record time of 10.49 seconds, which has stood for 34 years. Thompson-Herah's personal best is 10.54, set last year in Eugene.

For Crouser, 29, the worlds will be a chance to honor his late grandfather. Crouser comes from a family of throwers: His father Mitch was a discus thrower, his uncle Brian and cousin Sam were accomplished javelin throwers.

But it was his grandfather Larry who introduced him to the shot put. Larry Crouser passed away shortly before the Tokyo Games.

“He always said, 'Once you get to the comp, the hay is in the barn.' The preparation is where you win meets," Crouser said. "In the next six, seven weeks, it will be day-by-day focus on preparing myself the best I can for the world championships, so when I walk out onto that field I know I did everything to the best of my ability to prepare myself for that moment.”