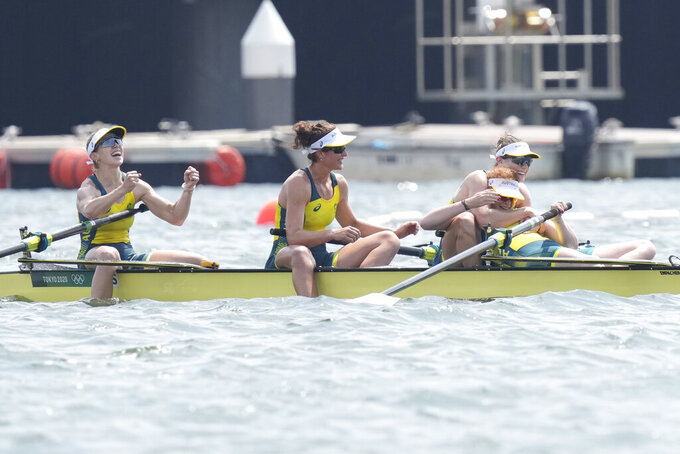 Britain lost a race it dominated for 20 years as a steering problem nearly caused a crash with Italy. And a haul of four medals for the Netherlands eased the struggles of a rowing team that has been wracked by COVID-19 cases since it arrived at the Olympics.

And don’t forget the records smashed in a ripping first day of racing in hot, windy and choppy conditions at Sea Forest Waterway on Wednesday. The first six races of the Games produced six Olympic or world records.

The crew from Down Under had quite a day with four medals overall, starting with back-to-back gold in the women’s and men’s fours. The women had barely stretched past the Netherlands for the gold by .37 seconds when the men pulled off the upset of the day minutes later.

The Australians dethroned a Britain program that had won five consecutive gold medals in the men’s four. The last team to beat them at the Games? Australia’s “Oarsome Foursome” that won gold in 1992 and 1996.

“We’re just super grateful to be sitting in that boat,” Australia’s Alex Hill said. “Those legends before us have achieved what they have, so it was just amazing to put it back where it belongs.”

Britain, which started next to the Australian boat, faded badly over the final 500 meters and didn’t win a medal. At one point, their boated veered off course and touched an oar in the Italian boat, which had been running second before the incident dropped them to the bronze medal. Britain fell to fourth.

“We cost them a silver. Sorry to those guys,” British rower Matthew Rossiter said. “We just let the concentration go and drifted across a bit. It’s an outdoor sport, and this stuff happens, but it’s heart-breaking when it’s you.”

Matteo Lodo of Italy was frustrated by the contact.

That wasn't Italy's only problem. Castaldo said he was having breakfast with Bruno Rosetti when his teammate received a phone call that he had tested positive for COVID-19 and couldn't race. He had to be replaced at the last minute.

The 2019 world championship silver medalists turned their steady march to Tokyo into a blowout in the Olympic final.

“We’ve worked very hard for these three years. We realized that we are very strong and together we did it,” Radis said.

The French duo of Hugo Boucheron and Matthieu Androdias kept up the Olympic record-setting pace in the men’s double sculls, holding off a late charge from the Netherlands over the final 50 meters to win by 0.2 seconds.

The world records were the next to fall.

The Netherlands did it first in men’s quadruple sculls, with a burst over the final 500 meters to win the country’s first gold medal in Tokyo. Their time of 5:32.03 beat the previous mark of 5:32.26 set by Ukraine at the 2014 world championships.

The Dutch matched Australia’s four-medal haul with one gold, two silver and one bronze. Despite being nipped at the finish line for gold in two races, the overall performance was a boost for a team that has already had a men’s rower and women’s coach test positive for COVID-19 since arriving in Tokyo.

The entire Dutch team has since been kept away from other teams and staff when not racing.

“It’s very hard that they can’t be here today on the most important race of our life, but at the same time we know that they’re watching us, they know what we have to do and we did it,” said Roos de Jong, who paired with Lisa Scheenaard to win bronze in women’s double sculls.

China wrapped up the medals races by setting the world record in women’s quadruple sculls to win the gold medal, finishing in 6:0.13 to shave nearly two seconds off the previous mark set by the Netherlands in 2014. Poland was more than six seconds behind in winning silver.