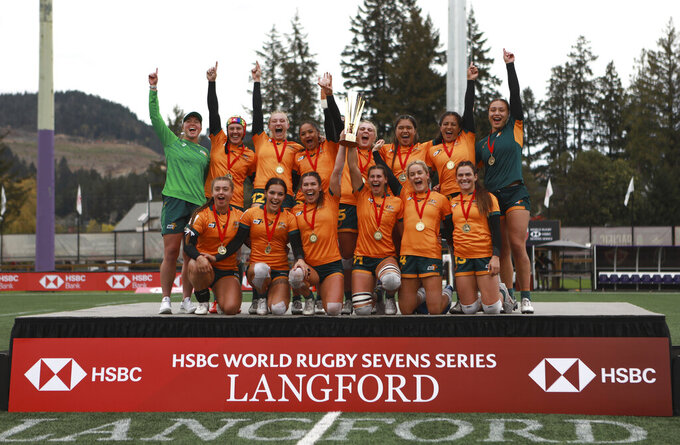 Team Australia celebrate their win over New Zealand in the gold-medal match on the final day of the World Rugby Women's Sevens Series in Langford, British Columbia, Sunday, May 1, 2022. (Chad Hipolito/The Canadian Press via AP)

LANGFORD, British Columbia (AP) — Lily Dick finished off a late, long-range attacking raid as Australia rallied to beat New Zealand 21-17 in the final of the World Rugby Sevens Series women’s event in Canada on Sunday and continue its dominance of the season.

The Australian women's team has won four of the five events to date and already has enough points to secure the 2022 women’s series.

Tokyo Olympics champion New Zealand was playing its first tournament of the season after skipping the first four events because of COVID-19 travel restrictions.

New Zealand led 17-14 late in the final but 2016 Olympic champion Australia attacked from deep in its own territory and kept the ball alive long enough for Dick to duck under a cover tackle and step over another defender on a 20-yard run to the tryline.

“It was all about being composed at the end," Dick said. “We knew we just needed one try and thankfully it came, this team never gives up.”

Australia opened the final with a try to Maddison Levi in the second minute but New Zealand hit back to lead 10-7 at the break after Sarah Hirini set up a try for Alena Saili and scored a try herself.

Australia went ahead when Charlotte Caslick crossed early in the second half but New Zealand regained the lead after a strong run from Michaela Blyde that was converted by Tyla Nathan-Wong, setting up a tense last two minutes.

“That was a tough final,” Caslick said. "It is great to have New Zealand back on the circuit, but we wanted this so much and it got us over the line.”

Ireland beat France 22-14 in the third-place playoff, with Amee-Leigh Murphy Crowe crossing for four tries, and Canada edged the U.S. 12-7 for fifth.