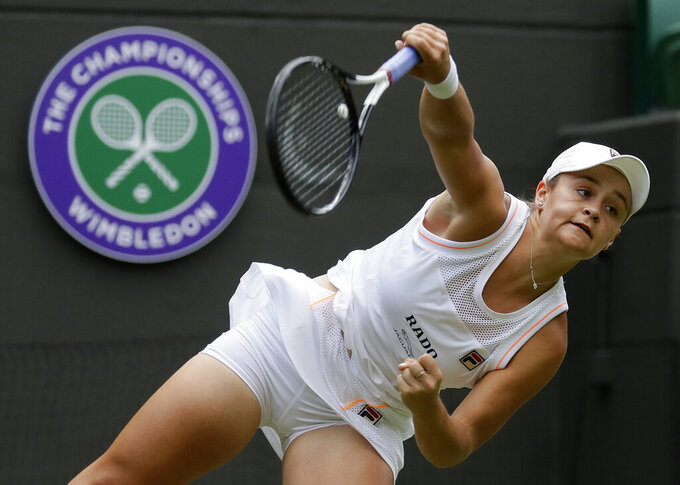 FILE - Australia's Ashleigh Barty serves to China's Saisai Zheng in their women's singles match during day two of the Wimbledon Tennis Championships in London, in this Tuesday, July 2, 2019, file photo. Barty is expected to compete in the Wimbledon tennis tournament that begins on Monday, June 28, 2021. (AP Photo/Kirsty Wigglesworth, File)

Former U.S. Open champion Sam Stosur was selected to play singles and doubles in her fifth Olympics, while Nick Kyrgios, Alex de Minaur and John Millman were among the men selected for the Australian team.

“I think making your first Olympic team, particularly as an Australian, we have such a rich history and the Olympics is something I’ve always dreamt of and obviously super excited to get out there and represent the green and gold,” Barty said in a statement. “It’s a massive united team and I can’t wait to be a part of it.”

Some of the highest-profile players in the sport won't be contesting the Tokyo Games, where heavy restrictions will be imposed on athletes and foreign fans have been barred. Serena Williams has announced she won't be in contention for the U.S. team.

On the men's side, Rafael Nadal and Dominic Thiem also have said they’ll skip the trip to Japan, where the Olympics open on July 23. Roger Federer is reserving his decision until after his campaign at Wimbledon.

The Olympics were last year postponed by 12 months because of the coronavirus pandemic.

Barty won the French Open and the season-ending WTA Finals in 2019 but missed most of the 2020 season after her semifinal loss at the Australian Open to stay at home during the pandemic.

She returned in time for the 2021 Australian Open, losing in the quarterfinals, and then retired from her second-round match at the French Open because of an injured left hip.

In Tokyo, she's planning to play singles and partner Storm Sanders in the doubles competition.

“Any opportunity you get to wear the green and gold, I wanted to grab it with both hands,” she said. "I’m fit, I’m healthy, I’m excited to play doubles with Storm, she’s a childhood friend of mine and we’ve played a lot together. So to be able to live out this dream with her is really, really special.”