Baseball organizer ran out of balls at Olympic qualifying 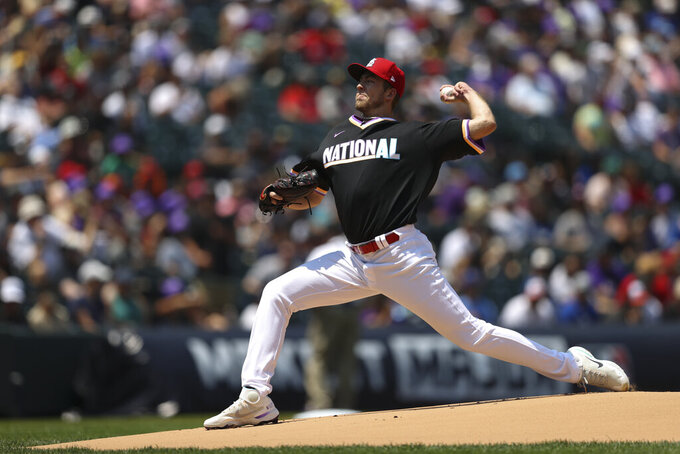 Matt Liberatore, of the National League, pitches during the first inning of the MLB All Star Futures baseball game, Sunday, July 11, 2021, in Denver. (AP Photo/Gabe Christus)

“We used the WBSC balls, which are slightly smaller and a little softer. It didn't seem like they flew as well,” St. Louis Cardinals minor league pitcher Matthew Liberatore said. “Then about halfway through the event we ran out and switched.”

World Baseball Softball Confederation spokesman Richard Baker said more balls were needed than anticipated because of COVID-19 and wet weather. When the WSBC balls ran out, minor league balls were used, he said.

“It was a tough adjustment because we spent a week-and-a-half doing nothing but throwing these balls and trying to get used to them," Liberatore said, "and then halfway through the event, they're like, hey, we're out of baseballs. You've got to use a different ball now.”

The 16-game, eight-nation tournament was played from May 31 to June 5 in Port St. Lucie and West Palm Beach, Florida.

“Just a different feel,” Liberatore said. “Minor league or major league baseballs felt slightly bigger and harder. The seams were a little bit smaller than the WBSC ball. But it’s been what we’ve been throwing with all year, so it wasn’t a crazy adjustment.”

Liberatore, a 21-year-old left-hander, was 1-0 with a 1.86 ERA in two starts during qualifying. He is 4-5 with a 5.21 ERA in 11 starts and one relief appearance at Triple-A Memphis and was selected for the All-Star Futures Game.

Even though he is not on the Cardinals' 40-man roster and technically is eligible for the Olympic baseball tournament, Liberatore was not allowed to join the U.S. team in Japan. The Cardinals never told him he was being blocked.

“I found out through the roster, the day the roster got released," Liberatore said. “I guess you could say it was a surprise.”