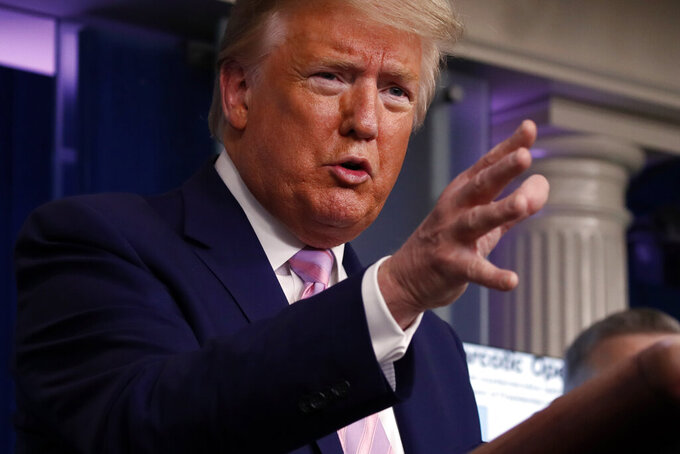 In this April 1, 2020, photo, President Donald Trump speaks about the coronavirus in the James Brady Press Briefing Room of the White House in Washington. At a time of social distancing,Trump is leaning into his plea to Congress to restore full tax benefits prized by business for fine dining and schmoozing. Trump is seizing on the pandemic crisis to target an item on his wish list: full tax deductions for business meals in restaurants and for other entertainment expenses. (AP Photo/Alex Brandon)

WASHINGTON (AP) — It may be an odd gesture at a time of social distancing, but President Donald Trump is leaning into his plea to Congress to restore full tax benefits prized by business for fine dining and schmoozing. Trump is seizing on the pandemic crisis to push for an item on his economic wish list: full tax deductions for business meals in restaurants and for other entertainment expenses.

Tax relief for fine dining and the like clashes with the reality of social separation urged by the government as a critical measure to contain the coronavirus. Restaurants and sports stadiums, with their corporate boxes, sit empty across the country.

But Trump argues that restoring the corporate tax deductions could help shore up the pulverized restaurant industry. It was Trump’s own tax law in 2017, which sliced the tax rate for corporations from 35% to 21%, that reduced or eliminated those same deductions. It was a rare provision that wasn’t business-friendly.

The deductions tend to favor higher-end restaurants, the part of the industry that’s been hardest hit by the economic dislocation. Mass-market eateries and fast food and pizza chains have been more likely to hold things together with takeout and delivery business.

“This is a great time to bring it back,” Trump said of the tax break during a White House briefing Wednesday. “Otherwise a lot of these restaurants are going to have a hard time reopening.”

Restoring the dining deduction could help at least the tonier part of the restaurant industry — but down the road and depending on the strength of the recovery and consumer spending, some experts believe.

“Do I think it’s a massive help? I don’t,” said Jonathan Maze, editor-in-chief of Restaurant Business magazine. “In theory, you could see it help as business travel picks backs up. Maybe it gets a few people into restaurants who might not have done so before.”

By far the biggest factor, Maze noted, will be the money that goes into consumers’ pockets, including from direct cash payments from the government. Whether they remain too frightened to go to restaurants is an uncomfortable question.

“While the restaurant industry sorely needs federal assistance, restoring deductibility is an action that should fall further down the priority list,” said Kevin Schimpf, senior manager for industry research at Technomic. “With so many business people and office staff working remotely for the foreseeable future, it’s unlikely this action would have much short-term benefit.”

Congressional leaders haven’t weighed in yet on Trump’s proposal.

Trump’s 2017 tax law, whisked through by the then-Republican majority in Congress, cut the 100% deduction for business meals in half and eliminated it entirely for most entertainment expenses at venues like sporting and cultural events.

From pricey corporate boxes at sports stadiums to Double-A baseball games in small towns, the entertainment deduction was a prized perk for companies. Some companies continued to spend without the tax incentive, seeing the benefits from entertaining as a payoff in future revenue. But the tax change had a bite.

There’s also a psychological effect. When something’s deductible, even in part, people think it’s less expensive; the government, in effect, is picking up part of the cost.