Calls for change for women's rights in French sports 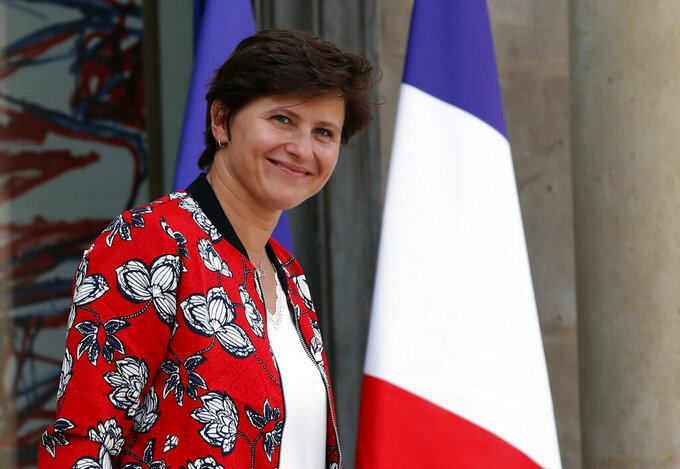 PARIS (AP) — French society is at a “turning point” for women’s rights within the male-dominated sports world, the country’s sports minister said this week amid a wave of protests from female journalists denouncing discrimination.

With Paris preparing to host what France hopes will be the most equal-ever Olympics in 2024, Sports Minister Roxana Maracineanu described her own experiences facing sexism and said it’s time for French mindsets to change.

“Whether we are a female journalist or a female minister or a female leader, today, if we want to advance the (women’s) cause, we need to push it forward with determination, ambition, conviction, because it can change people’s way of thinking,” Maracineanu told The Associated Press in an interview.

The 45-year-old minister, the first world champion in French swimming history and silver medalist at the 2000 Sydney Olympics, also worked as a sports commentator on television. She said she was not surprised by the stories told by multiple female sports journalists in a documentary aired Sunday denouncing sexist remarks and harassment they routinely face from colleagues and people commenting on social media.

In recent years, similar scandals broke out in France’s health sector and in the restaurant industry, she said.

“And I’m even less surprised how very accurate this theme is in the sports sector,” Maracineanu said. “It is overwhelmingly a male world, historically male-dominated.”

On the day the documentary went on air, more than 150 female sports journalists published an appeal calling for “gaining ground” in the profession.

The top French media watchdog said that women’s voices were heard in 13% of all radio and TV sports coverage in the country last year. About half of France’s journalists are women, although they make up only 10% of the country’s 3,000 sports journalists.

Maracineanu, who has been in President Emmanuel Macron’s government for two years, said she herself experiences sexist attitudes in her job — including some people suggesting she’s not competent or legitimate enough to supervise all sports, especially those traditionally viewed as masculine.

“They make me feel I don’t have the right to speak about some topics because social media or even some journalists or commentators feel they are allowed to call into question what I’m saying as sports minister,” she said. “I often get some remarks saying, ‘You, you know about swimming, but you don’t know about soccer or rugby.’”

Yet things are changing, she added.

“This documentary for example, where women speak out, tell their stories, dare saying what they went through. It also enables the management to discover some things they were not aware of, investigate internally, or a judicial investigation to be initiated if needed, and raises awareness among the public,” Maracineanu said.

Amid journalists speaking in the documentary, Clementine Sarlat, a rugby expert, left one of France’s most prestigious sports programs in 2018 after facing sexism and harassment as she was coming back from maternity leave.

“I’ve been discriminated against,” she told the AP.

In addition to sexist remarks, Sarlat, who was initially due to co-host the show, was told she would in the end have to “step aside” and would get no salary increase.

She later publicly described the distressing environment, prompting an internal investigation in the public television group that led to the laying off of three people from the sports service last year.

Also influenced by changes in the United States in the wake of the #MeToo movement, she felt it was her duty to speak out.

“I thought: If they do that to me, someone who goes on television ... what it is it like for women who don’t have the same exposure as me?” Sarlat said.

While gender discrimination has been a recurring problem in the sports sector for decades, female journalists hope greater public awareness and a better response from employers will help bring needed changes to the profession.

When she heard about Sarlat’s story last year, Amaia Cazenave, a rugby journalist then working at Radio France, thought, “I’m living through the same thing.”

She described sexist remarks, humiliations and discriminatory harassment at work, a “toxic environment” where she was “systematically blocked” from getting access to career opportunities.

Radio France opened an internal investigation this week and Cazenave said she received messages from women and men protesting the situation in the newsrooms of the public radio group.

“This is such a part of the corporate culture and a systemic issue that now that I have paved the way (to speaking out), people are rushing into it,” Cazenave said.

Amid other actions towards more gender equality in the sporting world, Maracineanu is pushing for a proposed law that includes a measure aiming at imposing as many women as men in national and regional executive bodies of sports federations. The changes would mostly start applying in 2024 —the year Paris is to host the Olympics.

For the first time in the history of the Olympics, as many women and men will be able to compete in Paris, she stressed. The decision was made by the International Olympic Committee in December.

“When we (women) will be equals to men on a television show, in the executive committee of a company or a sports federation ... and be able to say out loud what we think and what we want to do and be heard the same way men are being heard today,” Maracineanu said, “that will be fair.”