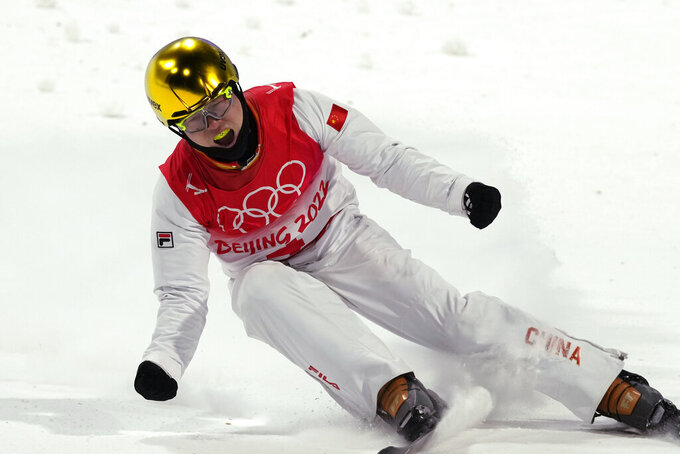 ZHANGJIAKOU, China (AP) — Qi Guangpu of China finally flipped his way onto an Olympic podium in men's aerials, winning a gold medal Wednesday after near misses in Sochi and Pyeongchang.

Qi cleanly landed a quintuple-twisting triple back flip in the medal round, when five of his six competitors tried the same trick and only he did it clean. Qi earned 129 points, easily beating defending champion Oleksandr Abramenko of Ukraine, who scored 116.5.

“Every trick in this competition is very important and very impressive," Qi said through a translator. "I did my best. During the competition, almost every competitor did their best, so every trick was very wonderful.”

Ilia Burov of the Russian team downgraded to a quad-twisting triple as the event's last competitor, expecting that a clean back full-full-double full would be enough for the podium. He earned bronze at the second straight Olympics.

Qi finished fourth at the 2014 Sochi Olympics, seventh in Pyeongchang four years ago and also competed at Vancouver in 2010. His back double full-full-double full Wednesday was plenty for gold, and he grabbed a Chinese flag and shouted toward the fans at Genting Snow Park when his victory was cemented moments later.

“I have learned a lot," Qi said. "This is the time for me to win the gold medal in China, my home country. I am very happy my people are here with me. I can feel they are very happy and excited.”

China has seven golds and 13 medals in Beijing, its most ever at a Winter Games.

Burov landed a quint-twisting triple during the first session of the finals to ensure himself a spot in the final six. He pulled back to the quad-twist trick with a medal on the line and collapsed to the ground when his score of 114.93 was announced.

Burov's brother, Maxim, is a two-time world champion but surprisingly missed the finals after botching both of his landings during qualifying.

Jia Zongyang of China, a silver medalist in Pyeongchang four years ago, was knocked out in the first session.