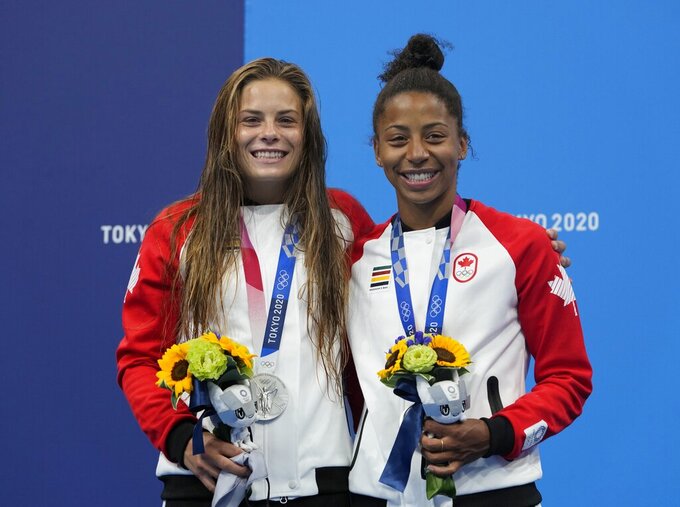 Jennifer Abel and Melissa Citrini Beaulieu of Canada pose for a photo after winning silver medals during the Women's Synchronized 3m Springboard Final at the Tokyo Aquatics Centre at the 2020 Summer Olympics, Sunday, July 25, 2021, in Tokyo, Japan. (AP Photo/Dmitri Lovetsky)

TOKYO (AP) — The rest of the diving world watches China pile up Olympic gold medals. The Chinese insist they're focused on the process, regardless of what it produces.

The result was the same in the first diving event of the Tokyo Olympics.

China won the women’s 3-meter synchronized springboard to get started on what many predict could be a golden sweep of the eight events.

The U.S. duo of Alison Gibson and Krysta Palmer finished last among eight teams in their Olympic debuts.

Shi and Wang led each of the five rounds, tying with the U.S. after their second dive. They earned scores ranging from 8.0 to 9.0 for their last dive, an inward 2 1/2 somersaults pike that carries a 3.0 degree of difficulty.

“We don’t define our success by the gold medal,” Shi said through a translator. "It’s just the work. The gold medal means we trained hard.”

The Chinese have won 37 of 48 gold medals at the last seven Olympics. The country’s women have not lost an Olympic diving event since 2004. This is their fifth consecutive victory in synchronized springboard, their only loss coming when the event debuted at the 2000 Sydney Games.

“The way they lead, the way they train is probably different from the rest of the world,” Abel said. “When we come here, we don’t aim for second place. We aim to be at our best. If our best is second place, then it’s like a gold.”

Shi won her third Olympic medal. She teamed with Wu Minxia to capture gold in Rio de Janeiro five years ago in synchro springboard and won the 3-meter individual title, too.

“I just want to enjoy my competitions,” Shi said. "I care nothing about the medals.”

The Canadians rallied from sixth after two rounds to give Abel her second medal in her fourth Olympics. The 29-year-old Abel earned bronze on 3-meter synchro in 2012. She is the first diver not from China or Russia to win at least two medals in synchro springboard.

It was redemption for Abel, who finished fourth in both her events five years ago in Rio. As a result, she made some changes, including teaming with Citrini-Beaulieu.

“I knew we were going to be the best team together, and she was going be a good friend to me, too,” Abel said. “She is so joyful and really passionate for diving. That brings back the desire for me and the happiness when I dive.”

The Americans botched their third dive, dropping to sixth. Gibson and Palmer never recovered and fell to last on their fourth dive, which included a mark of 2.5.