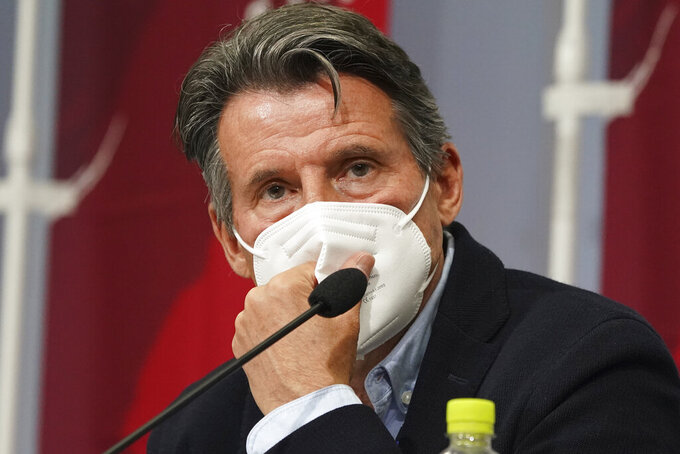 FILE - Sebastian Coe, president of World Athletics, listens to a reporter's question during a press conference as Coe visited an athletics test event for the Tokyo 2020 Olympics Games at National Stadium in Tokyo, Sunday, May 9, 2021. With track and field adding another Diamond League event in China, World Athletics president Sebastian Coe addressed the human rights issues in the country during his state-of-the-sport talk Tuesday, Dec. 21, 2021. (AP Photo/Shuji Kajiyama, File)

With track and field adding another Diamond League event in China, World Athletics president Sebastian Coe addressed the human rights issues in the country during his state-of-the-sport Zoom meeting Tuesday.

The Diamond League, an annual series of track and field competitions, confirmed earlier in the day it would hold an event in the Chinese city of Shenzhen on Aug. 6, in addition to one a week before in Shanghai.

The announcement comes in the wake of the Women’s Tennis Association suspending tournaments in the country over concerns for Peng Shuai, the Chinese tennis star who in a November social media post attributed to her accused a former top Communist Party official of forcing her into sex. In a video posted by Lianhe Zaobao, a Singaporean Chinese-language newspaper, Shuai recently denied saying she was sexually assaulted.

“We are, of course, concerned for the welfare of all athletes,” Coe said. “I believe all athletes should be free to voice their concerns and sports should never flinch from making those points. But it is still better to have open dialogue and sporting relationships than pulling up the drawbridge. Very few other sectors choose to do that. Sport has always played a very important part in the deft diplomacy that has been historically proven to be very successful at times.”

He added that he’s “philosophically opposed” to boycotts in sports. As a middle-distance runner for Britain, Coe won the 1,500 meters at the 1980 Summer Games in Moscow after the Americans led a boycott. He won the 1,500 again at the ’84 Games in Los Angeles when the Soviet Union led a boycott.

“They tend not to achieve what they set out to achieve,” Coe said. “Diplomatic boycotts, while not really impacting the athlete, are not really particularly strong gestures.

“It’s really important the Diamond League has a foothold in all our big athletics nations,” he added. "You make all sorts of balances and judgments when you are looking at your competition schedule and your programming. We consider that to be an important part of our sport.”

During the Zoom call, Coe also discussed how next summer was a golden opportunity to extend track’s footprint in America with the world championships being held at Hayward Field in Eugene, Oregon. It marks the first time track's biggest competition outside of the Olympics will be held in the U.S.

It's a chance to gain exposure with the 2028 Olympics being held in Los Angeles. It's also a chance to showcase the next generation of American standouts such as teenage sprinter Erriyon Knighton and Tokyo Games 800-meter champion Athing Mu.

Coe noted there are no plans to expand the number of events for female runners with differences of sex development (DSD). Two-time Olympic 800-meter champion Caster Semenya of South Africa didn't compete in Tokyo due to the World Athletics’ testosterone rules. Semenya took a late shot at qualifying for Tokyo in the 5,000, an event not affected by the hormone regulations, but came up short.

“We’ve always made it clear that our regulations are always under review,” Coe said. "The reality of it is that we’ve always made it clear that if, in the course of those reviews, there is overwhelming evidence that some other events are massively impacted, such that they alter the integrity of the sport and particularly the overall principle of protecting female sport, women’s sport, then we have to be clear that is potential but there’s nothing at this moment.”

Coe also addressed the larger-than-life persona of retired Jamaican sprinter and world record holder Usain Bolt — and how hard that is to replace.

Instead, World Athletics is relying on a bevvy of exciting standouts such as Karsten Warholm of Norway and American Sydney McLaughlin, who each set 400 hurdles world records in Tokyo.