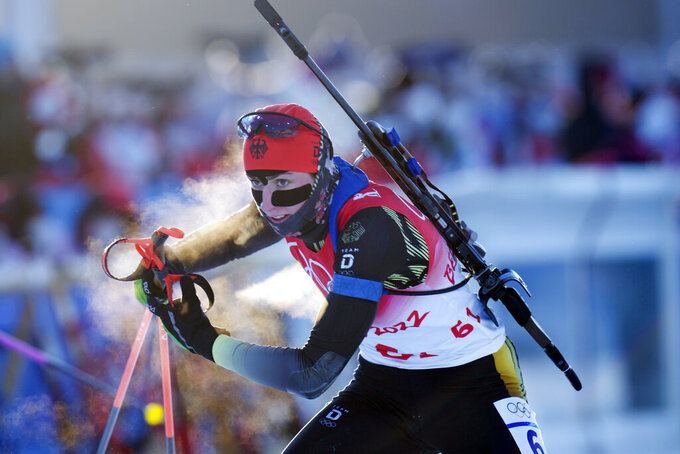 ZHANGJIAKOU, China (AP) — The snow squeaks under their skis as Olympic athletes spin their arms in a wind-milling motion and hop up and down in place to keep warm, their noses and cheeks covered in strips of colored tape as mist rises from their buff-covered faces.

When the temperature dips to minus-16 degrees C (3.2 degrees F) and the wind blows clouds of snow in the air, like it did at the cross-country and biathlon courses at the start of the Beijing Olympics, the athletes have to do something to keep from freezing.

“When you factor in wind speeds of over 20 kilometers per hour as well as their ski speeds, the wind chill may be minus-30 C (minus-22 F) or colder,” said Brett Toresdahl, the U.S. biathlon team physician.

Skiers got a bit of a respite from those bitter conditions in the middle of the week as winds calmed and temperatures hovered around minus-7 degrees C (19 degrees F). But that's expected to change this weekend when a cold front moves through. Even snow is in the forecast.

The frosty conditions are hard on the athletes.

“My cross-country teammate froze his finger in the skiathlon so that it’s still a little swollen and doesn’t have quite all the feeling back yet,” Estonian biathlete Johanna Talihärm said. “It was his ‘trigger finger’ but luckily he is not a biathlete.”

Talihärm's lips froze during the individual biathlon race because she was unable to cover them up and still breath hard. Extra applications of lip balm helped, she said.

“You just need to be super proactive about the cold and plan all the layers and extra measures,” she said. “Never leave a moment to just stand around before the start.”

Biathlete Hanna Sola of Belarus said they're putting on as many layers as possible, "but still everything is freezing.”

“You can see everyone waving their hands, jumping on the spot," Sola said. "It would be great if the starts were a bit earlier because when the sun goes down, the chill amplifies so much that it is unbearable even to ski.”

Austrian women’s biathlon team coach Gerald Hönig said the sport's rules state that races can’t be held if temperatures dip below minus-20 C (minus-4 degrees F), but they don’t take wind chill into consideration. It would be up to the race jury to decide if conditions are unsafe before a race would be postponed or canceled.

“Athletes are every day in these conditions training and racing the competitions,” Hönig said. “This is very hard for the body, for the energy, for the health. It’s difficult here in this three weeks.”

Biathletes must be able to feel their trigger finger to shoot accurately, but that's a challenge in the cold, Marketa Davidova of the Czech Republic said.

“That was really difficult for us; to stay warm and keep the fingers working,” she said. "That was the tricky part.”

The cold is also affecting the snow itself — bitter cold makes the skis glide more slowly over the trails, which means the athletes must work harder to go fast.

Therese Johaug of Norway said she loves the tracks in China, but the snow is a factor.

“They are different from the cross-country tracks in the World Cup, especially because the snow is so slow," said Johaug, who won the opening gold medal of the Beijing Olympics.

Chris Hecker, a wax technician with the U.S. ski team, said the cold temperatures create higher levels of friction between the base of the ski and the snow, slowing them down and making that squeaky noise.

“The static from that dry snow is slowing down the skis tremendously and we’re having to put in different hand structures and putting in different waxes to try and reduce the amount of friction on the ski base,” he said.

Another factor is blowing snow.

“Mostly it’s the really dry wind-blown snow that keeps filling into the classic tracks and keeps covering the skate lanes,” Hecker said. “So it ends up being a really slow race for most racers.”

Talihärm said the conditions require more power to get the skis to glide and more endurance climb the hills.

One consolation is that Mother Nature doesn't discriminate; everyone is suffering equally.

“It’s the same for everyone," Swedish biathlete Sebastian Samuelsson said, “and we just have to fight with the snow.”