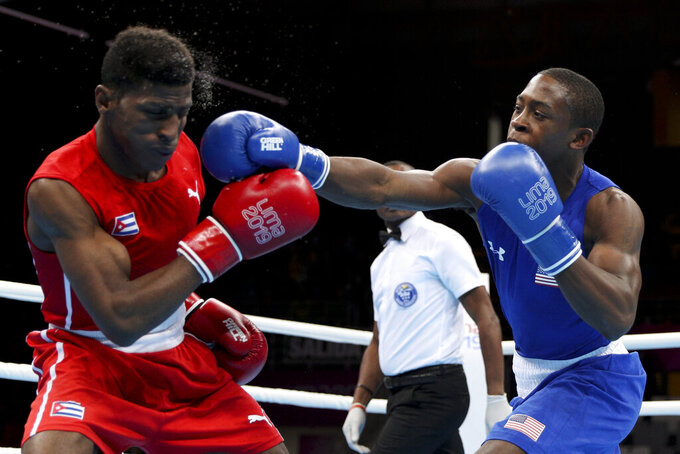 FILE - In this Aug. 2, 2019, file photo, Keyshawn Davis, right, of the United States, hits Andy Cruz, of Cuba, during their men's light welterweight final boxing bout at the Pan American Games in Lima, Peru. When the Tokyo Olympics were postponed, Davis took several weeks to choose his path to boxing stardom. Every member of the U.S. boxing team agrees so far. Even with an extra year to wait, Davis and his 12 teammates are all still focused on Tokyo and the rewards of the Olympic experience. (AP Photo/Martin Mejia, File)

Thanks to the coronavirus pandemic, the top professional prospect on the U.S. Olympic qualification team was suddenly facing nearly a year without an amateur fight that mattered.

He could wait 16 months for his shot at gold in Tokyo, or he could accept one of several lucrative offers to begin his professional career immediately.

When Davis began his deliberation, the 21-year-old lightweight was leaning toward the pros. After speaking to family, coaches and his fellow fighters, he decided to keep his Olympic flame burning.

“It’s just hard to say no to the Olympics,” Davis said from his home in Virginia. “That’s like passing up a deal right in front of your face that makes a lot of sense.”

Every member of the U.S. team agrees so far. Even with an extra year to wait, Davis and his 12 teammates are all still focused on Tokyo and the rewards of the Olympic experience.

The Olympic postponement could have caused upheaval for many Western nations’ teams in an amateur sport that frequently loses its brightest talents to the pros, even in normal Olympic cycles. But U.S. head coach Billy Walsh has managed to keep his whole team together for 2021 by selling his boxers on the promise of brighter pro futures if they show a little patience.

“We've always had that challenge,” said Walsh, the Irish coach who has restored the fractious U.S. program to respectability in his five years in charge. “Since I came here, we’ve turned that around a piece. We’ve given the guys the vision of first becoming an Olympic champion, as all the greats did back in the day, and using that for a platform to launch your professional career.”

Yet Olympic experience still turns heads within the sport — and it remains an enormously valuable commodity to boxing promoters, who pay higher prices for fighters they can promote with “Olympian” perpetually affixed to them like a new first name.

And if a boxer manages to come home with gold, the game changes even more. Just ask two-time gold medalists Vasyl Lomachenko or Claressa Shields, who established thriving pro careers and claimed world title belts within months of their Olympic triumphs.

“You can go now, and you’re going to have to take 20-odd fights to fight for a world title,” Walsh told his fighters recently. “You go get an Olympic gold, or if you have those Olympic rings on your shoulder, that will fast-track you to world title fights. You’re a name. You’re known. You’re an Olympian.”

Davis also relied on advice from Shakur Stevenson, the 2016 Olympic silver medalist who trained with Davis on the way to Rio de Janeiro. With his Olympic fame, Stevenson got a title shot in his 10th pro fight and won a world championship in his 13th bout last fall.

"He’s always the first person I call, because he was the one who helped me get on this road to the Olympics," Davis said. “He was the one that was telling me, ‘Just wait it out.’ And after a while, just going back and thinking about it, he was right.”

Stevenson emphasized the jump in competition when Davis moves from fighting fellow amateurs to seasoned professionals. Davis has the skill to win plenty of fights, but needs experience that the Olympic cycle can provide.

Still, nobody knows when that cycle will spin again.

Walsh and the U.S. fighters realize no major competitions are likely to happen until next year, so they're staying sharp for now with virtual workouts distributed on an app by their strength and conditioning department. When it's safe for the team to gather in Colorado Springs, Walsh will do it.

“Boxers are used to being in training camp and having a goal at the end of it,” Walsh said. “When that goal is taken away, it leaves them open to all sorts of things and ideas, so we try to give them that bit of structure. When you get to a certain age, six months isn’t long. For a 20-year-old, it seems like forever.”

With his decision made, Davis already has a broad perspective on the months ahead. He is staying sharp in the gym, but he also has plans that will benefit his ultimate goal of becoming a significant, well-known pro fighter.

“Mainly I want to work on my outside things,” Davis said of the upcoming year. “When the coronavirus starts to clear up, I’m going to start talking to these kids, going to these high schools, going to these YMCAs. Start reaching out to these kids and start touching more people outside boxing. I just want to build my brand more.”