Dressel considered on ill-fated relay, saw no chance of gold 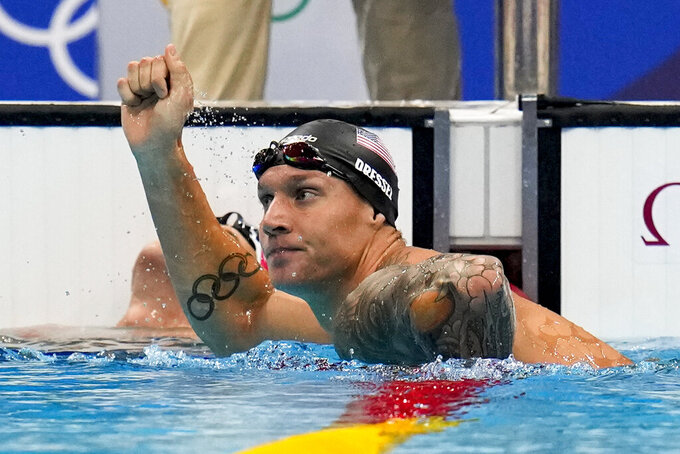 TOKYO (AP) — Caeleb Dressel has a shot to win six gold medals at the Tokyo Olympics.

He might've added another medal to his collection if he'd swam the 4x200-meter freestyle relay, but he doesn't think there's any chance it would've been gold.

Dressel revealed Friday that he was in strong consideration for the relay — a move that Olympic icon Michael Phelps says would've given the Americans a shot at gold.

Britain wound up winning the race, just missing a world record, while the U.S. quartet was shut out of the medals with a shocking fourth-place showing.

It was the first time the Americans have failed to win a medal in a relay they entered at the Olympics. They had been 94 of 94.

“I think (Britain) was going to win that no matter who was on a relay,” Dressel said. “They had the depth this year. In my opinion, I think it was a race for silver. It kills me to say that. The standard for United States swimming is gold. But GB had the guys. They had a fantastic relay.”

The British were led by Tom Dean and Duncan Scott, who finished 1-2 individually in the 200 freestyle.

Dressel did not attempt to qualify for the U.S. team in the 200 free, though he has plenty of experience at that distance.

He swam it in the preliminaries at the U.S. Olympic trials — mainly to stay sharp in the early days of the meet — before dropping out to focus on his stronger races.

Dressel is competing in three individual events at Tokyo, and is expected to be on three relays. He already led the Americans to gold in the 4x100 free relay and claimed his first individual Olympic title with a victory in the 100 free.

Dressel said he learned a couple of days before the 4x200 free relay that he wouldn't be on the team.

But Phelps was highly critical of Dressel being passed over.

“It’s shocking,” Phelps, who is working as an analyst for NBC at these games, said in an interview with the American television network. “You know, in my opinion, he’s probably the best 200 freestyler in the world. He can probably put up one of the best times that we’ve seen."

The American coaches went with Kieran Smith, Drew Kibler, Zach Apple and Townley Haas in the final. They labored to a time of 7 minutes, 3.24, more than 4 1/2 seconds behind the gold medalists and also trailing Russia and Australia.

Apple was heavily criticized on social media for swimming for one of the slowest legs of anybody in the field. His time of 1:47.31 was worst among any swimmers from the top five teams; only four of the 32 athletes in the entire field turned in a slower 200 time.

“Really it was a race for second,” said Dressel, who turned in a time of 1:46.63 in his lone 200 free race at the U.S. Olympic trials last month. “I stand by the decision with the guys they put on the relay.”