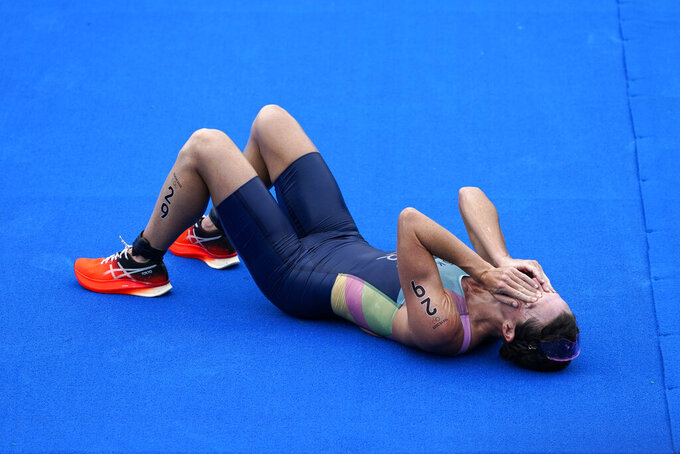 Flora Duffy of Bermuda celebrates after crossing the finish line to win the gold medal in the women's individual triathlon competition at the 2020 Summer Olympics, Tuesday, July 27, 2021, in Tokyo, Japan. (AP Photo/David Goldman)

TOKYO (AP) — Bermuda has been sending athletes to the Olympics since 1936. Until Tuesday, the Atlantic island's highest honor was a bronze medal won 45 years ago.

Flora Duffy changed that in just under two hours, swimming, cycling and running through the wind and rain around Tokyo Bay to win the Olympic women's triathlon for Bermuda's first gold medal.

A self-governing British overseas territory with a population under 65,000, Bermuda has only two athletes competing in Tokyo: Duffy and men’s rower Dara Alizadeh. It is the smallest contingent Bermuda has ever sent to the Summer Games.

Bermuda hadn’t medaled at the Olympics since Clarence Hill’s bronze in heavyweight boxing in Montreal in 1976.

“I think (the medal) is bigger than me. It's going to inspire the youth of Bermuda and everyone back home that competing on the world stage from a small island is really possible," said Duffy, a Bermuda native who grew up there.

Duffy, 33, had never finished higher than eighth in her previous three Olympic tries. But the two-time former world triathlon series champion was one of the favorites for gold and was among the leaders Tuesday for the entire race. She closed out the victory with a dominant final leg to finish in 1 hour, 55:36 minutes.

Duffy pumped her arms over her head as she hit the final 50 meters to the finish line, then held her head in her hands as she pushed through the victory banner and collapsed. She got up to cheer on her competitors.

“I tried to just keep my composure and not allow my mind to drift to the fact that this was really happening until about the last kilometer of the run," Duffy said. “I saw my husband — he’s my coach — on the side of the road and just gave him a little smile. From there I just sort of allowed all the emotions to come."

Georgia Taylor-Brown of Britain, who got a tire puncture near the end of the cycling stage but rode through it, finished more than a minute behind. American Katie Zaferes was third.

“I just rode on the flat," Taylor-Brown said. "I did panic ... the whole race I had been right at the front.”

Zaferes, who was selected for the U.S. team despite a string of disappointing finishes over the last year, backed up the decision to bring her to Tokyo by winning bronze.

“I'm so happy that I was here,” said Zaferes, whose father died in April. “To have the confidence I would be ready for today and to be able to execute that and be on the podium. I'm just so proud.”

Ukrainian Yuliya Yelistratova did not compete after the International Testing Agency reported Sunday that she had tested positive for the banned blood-booster EPO in a sample collected at a June competition. Yelistratova had competed in the two previous Olympics.