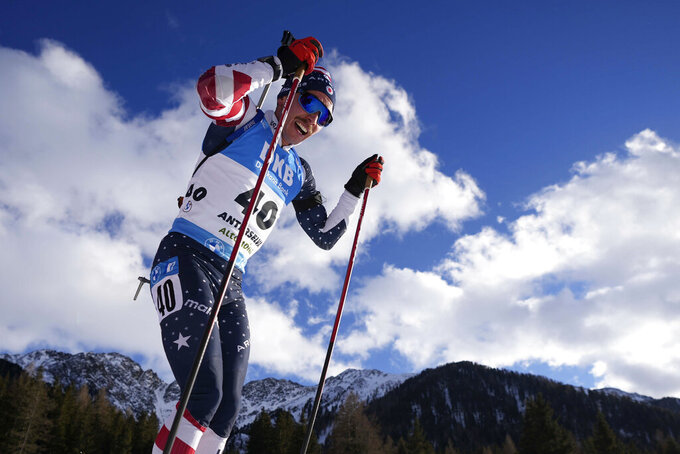 FILE - Jake Brown of the United States competes during the men's 20km individual race at the biathlon World Cup in Anterselva, Italy, Thursday, Jan. 20, 2022. Brown says biathlon is the marriage of “two totally unrelated things." One is physical and the other is mostly mental. (AP Photo/Matthias Schrader, File)

ZHANGJIAKOU, China (AP) — One analogy often used to describe how it feels to compete in a biathlon race goes like this: “Run up 20 flights of stairs as fast as you can and then try to thread a needle.”

Biathlon is the marriage of “two totally unrelated things,” says U.S. biathlete Jake Brown of Saint Paul, Minnesota. “One is totally physical, and the other is part physical but mostly mental. Having to combine that mental exertion on the range when you’re under physical duress from skiing is really the difficulty of our sport.”

Here's a glimpse into what it is, what makes it tick and how it unfolds.

A biathlete skis several kilometers and arrives at the shooting range with a heart rate as high as 180 beats per minute. Next they shoot at five targets within 25 to 35 seconds.

They're penalized for each missed target. It usually involves skiing a 150-meter loop but in one race format, the individual, one minute gets added to their time for each mistake. It can mean the difference between a podium finish and 20th place.

Most people know the drama that can build during a cross-country ski race, “but with biathlon you kind of double or triple that drama, because you add in the addition of shooting.”

As the race develops, the lead can shift depending on how the racers are shooting that day.

“It can really come down to that last shooting stage,” he says. “And it can put people on the edge of their seats as spectators, where they’re really hanging on every shot in that last stage. And oftentimes, you know, you’ll have a lead switch there and then the final loop is this dog race to the finish.”

Biathletes use the skate method of cross-country skiing to travel around trails that run between 1.5 kilometers and 3.5 kilometers (0.9 to 2.2 miles), depending on race format.

They carry a .22 caliber biathlon rifle that weighs between 3.5 and 7.5 kilograms (7.7 to 16.5 pounds) unloaded. Special slots built into the rifle stock allow them to carry two to four magazines that hold five bullets each.

The rifle has a sight on the end of the barrel and another just above the bolt; they allow the athlete to line up the rifle for aiming. The sights don’t contain any magnification.

Biathletes have a 45-minute period before every race to “zero" their rifle — align their sights — to ensure they're set for the weather of the day. During this process, coaches watch through a spotting scope as they shoot five bullets into one paper target. If their group of shots hit on the left, and the wind is from the left, they'll adjust their sights to the right to account for the wind.

Coaches watch through scopes during the race, too, to see if racers need to make additional adjustments. They can radio shooting information to team support out on the course who will racers know what's needed. Coaches are not allowed to speak to athletes on the range during races.

Biathletes carry the rifle on their backs with a harness that attaches to the rifle stock, allowing them to quickly swing into the shooting position, which alternates between prone and standing.

The rifle also has a strap with an elastic cord and hook that clips into a D-ring on a band that the biathlete wears around their upper arm. This allows them to create a tripod with their elbows and body while in the prone position.

Each biathlon race begins with a ski loop. The distance depends on the race format. The first shooting bout is in the prone position.

As biathletes enter the range, they slow their pace to get their heart rate down. They arrive at a mat, drop to their knees and swing the rifle to the side of their body to insert a loaded magazine, hook into the sling, drop to their stomachs and line up the sights.

In this position, breathing makes the rifle barrel go up and down, so the athlete will center the rifle, take a breath or two and then hold it as the target slides into the center of the sight. A gentle squeeze on the trigger releases the shot. They use their thumb and index finger to move the bolt action that loads the next bullet.

They repeat this process on all five targets and put the rifle back on their backs. If they hit all five, they can head out on the next ski lap, but if they missed targets, they must ski the 150-meter (164 yard) penalty loop for each miss.

After skiing the lap, they’ll come back in for another shooting.

In sprint races, biathletes start at 30-second intervals, ski three lap laps with one prone and one standing shooting in between. It’s a race against the clock and the shortest biathlon race format.

Sprint races are often followed by the pursuit where biathletes start based on where they finished in the sprint, with the fastest going first. The pursuit has five skiing loops and four shooting bouts, two prone and two standing.

A mass start race has a similar format but everyone starts at the same time. Only the top 30 biathletes on the World Cup rankings start this race.

The individual race has interval starts with four shooting bouts and five ski loops. But instead of skiing a penalty loop for each miss, a minute is added for each missed shot.

Teams of four men and four women race relays. Each biathlete skis three loops with one prone and one standing shooting bout. The racers are allowed to use three extra bullets for each shooting bout during relay races.