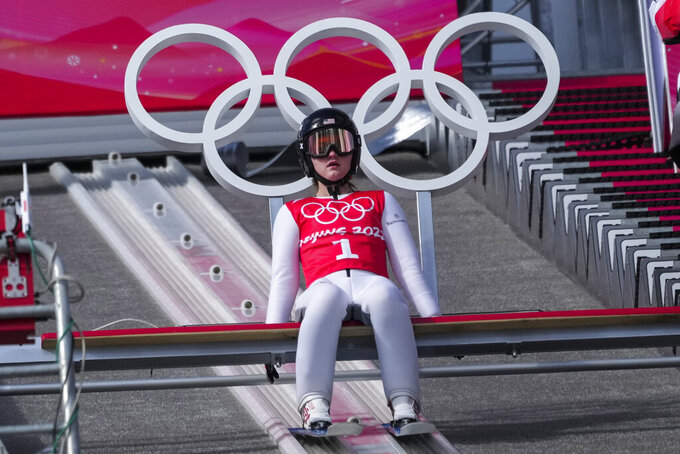 Casual fans, though, probably have no clue about the scoring system or skills and techniques necessary to win gold even though the sport has been a part of the Winter Olympics since the first one in 1924.

In the U.S., most people can't probably name a ski jumper other than “Eddie the Eagle,” from the 2016 film about Eddie Edwards’ unlikely bid to become a British Olympian.

The Associated Press is here to help. Here's a look at what to watch, starting Saturday when the women go for gold, from the moment ski jumpers sit on a bar about as high as a 40-story building until they glide over machine-made snow and wait to see how far they flew and how the judges scored their performance.

THE BAR IS VERY HIGH

Ski jumpers sit on a bar, calming their nerves with deep breaths, and wait for a green light to go. If there's too much of a gust, they have to slide back off the bar and onto a step to wait for wind to calm down. A focused mind, which ignores fears, is key.

FUN ON THE IN-RUN

With skis wider and longer than those in other disciplines, jumpers go down a steep incline referred to as the in-run. They try to avoid making contact with the sides of ice-filled channels go as fast as 100 kph (62 mph) to help them fly farther.

Jumpers lead with their helmet, throw their hands back and crouch low into a tuck with a flat back for aerodynamics. Balance and flexibility are critical.

Near the end of the in-run, men and women make an explosive jump without moving their upper body to create lift for flight. The timing and technique in the take-off is perhaps the most important part of the 15-second process from sitting on the bar to sliding to a stop in the snow.

COME FLY WITH ME

Jumpers lean forward with hands near hips, hovering their torso over skis that are in a “V" shape in a technique used since Swedish ski jumper Jan Bokloev started doing it in 1985 after they previously had them parallel.

COMING IN FOR A LANDING

When skis hit the snow, judges want one slightly ahead of the other and for the jumpers to gracefully glide on what's known as the outrun.

Jumpers are aiming for the K-point of the hill, where it starts to flatten out, to earn 60 points and those who fly past it earn more points while points are deducted from coming up short. Five judges award scores of up to 20 points for style from start to finish, looking for jumpers who look keep their torso and limbs still while floating through the air and land gracefully among other things.

There's a dirty little secret in the sport, which is plagued by eating disorders. Fat don't fly is a phrase heard at least in the U.S., because physics prevent a heavier jumper from flying farther than a lighter one.

Norway's Maren Lundby decided not to defend her Olympic gold because she put on weight and chose to put her physical and mental health first, leading to her skipping the season.

If you're looking for a winner, maybe don't pick an American. The U.S. has won only one Olympic medal, and that happened nearly a century ago in what was quite a tale. Anders Haugen left the first Winter Olympics in 1924 without any hardware, but 50 years later was awarded a bronze medal after a scoring error was confirmed.

Norway, Austria and Germany are traditional powers. Poland and Japan are pretty good, too. Japanese jumper Ryoyu Kobayashi and Germany’s Karl Geiger are relatively safe bets to earn a spot on the podium.

On the women's side with Lundby taking time off and top-ranked Marita Kramer of Austria out after testing positive for COVID-19, Germany's Katharina Althaus and Sara Takanashi of Japan are the favorites.

This year, for the first time at the Olympics, men and women will compete together in a mixed team event.