EXPLAINER: So why is Beijing holding another Olympics? 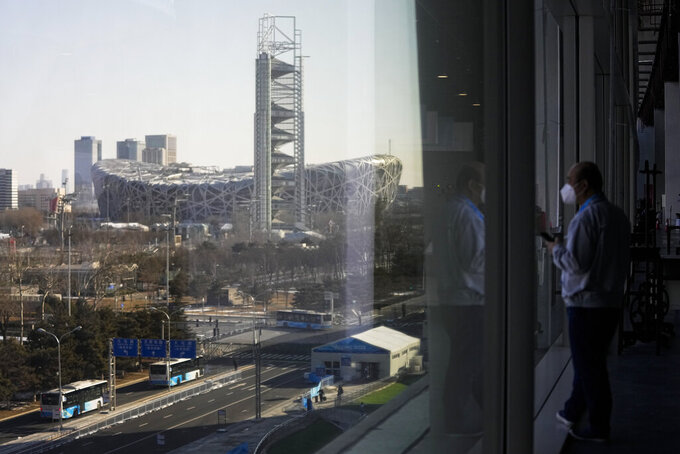 FILE - The Beijing National Stadium, a venue for the opening and closing ceremonies at the 2022 Winter Olympics, is seen from the main media center Jan. 25, 2022, in Beijing. Beijing will become the first city to host both versions of the Games. (AP Photo/Jae C. Hong, File)

BEIJING (AP) — Nobody views Beijing as a winter sports capital. So why is the sprawling city — famed internationally for roast duck, maze-like "hutong" courtyard neighborhoods and its battle with air pollution — holding the Winter Olympics? These Games come just 13 1/2 years after the extravagant 2008 Summer Games.

And why are the Winter Olympics based in such an urban landscape?

There's a simple answer. Potential hosts in Europe — as many as six including favorites like Norway and Sweden — dropped out of the bidding in the wake of the doping-scandal-ridden 2014 Winter Olympics in Sochi, Russia. The $51 billion price tag for Sochi also frightened future bidders.

When the IOC voted in 2015 on a host for 2022, the only remaining candidates were Beijing and Almaty, Kazakhstan. The IOC narrowly picked Beijing in a 44-40 vote.

WHY ARE THE WINTER OLYMPICS A DIFFICULT SELL?

It comes down to money. Smaller countries in Europe won't foot the bill, and taxpayers also have a say in many Western democracies.

St. Moritz, Switzerland, and Munich, Germany — two areas with potentially strong bids for 2022 — were rejected by the public in voter referendums. The German rejection was a stinging blow to International Olympic Committee President Thomas Bach, who is from Germany.

It’s also notable that the IOC headquarters are in Switzerland.

Krakow, Poland, and Lviv, Ukraine, also withdrew bids. But the ones that hurt were Oslo, Norway and Stockholm, Sweden, which pulled out because of costs or politics. In Norway, a lawmaker was angered during the bid process by reported demands from the IOC to include a cocktail reception with the King of Norway as part of Games protocol.

Bach acknowledged in a 2014 interview that the Winter Olympics were a tough sell.

WHERE DO THE WINTER GAMES GO NEXT?

The 2026 Winter Olympics have been awarded to Milan-Cortina d'Ampezzo, Italy. The IOC is thrilled to be returning to a traditional European winter venue after the last three winter Games in Sochi, Pyeongchang, South Korea, and Beijing.

The 2030 Winter Games have not yet been awarded. But Barcelona, another urban, former Summer Games host, is being considered. The snow portion would take place in the Pyrenees. The bid is likely to have strong support at the IOC, where Juan Antonio Samaranch Jr. is an influential member and a native of Barcelona. His father was a longtime IOC president.

The other top 2030 candidate is probably Sapporo, Japan, which held the Winter Games in 1972. The IOC owes Japan a favor after it pulled off the 2020 Summer Olympics despite a one-year delay from the pandemic. The delay probably cost Japan an added $2 billion.

HOW ARE HOST CITIES CHOSEN?

Under the IOC’s new process of choosing venues, the approximately 100 IOC members no longer vote on the host cities. The choice is now made by the leadership headed by Bach.

The move was forced partly by vote-buying scandals that soiled the selection of Rio de Janeiro for 2016 and Tokyo for 2020.

Bach said at the time that the bid process produced too many “losers" with cities spending millions on failed bids. In reality, Bach wanted control of where the Games go as the IOC now tries to emphasize cities that already have venues and hotels in place. This often means urban areas — or former host cities. Which points back to Beijing, too.