Favored Russians back in final at Olympics, now face Finland 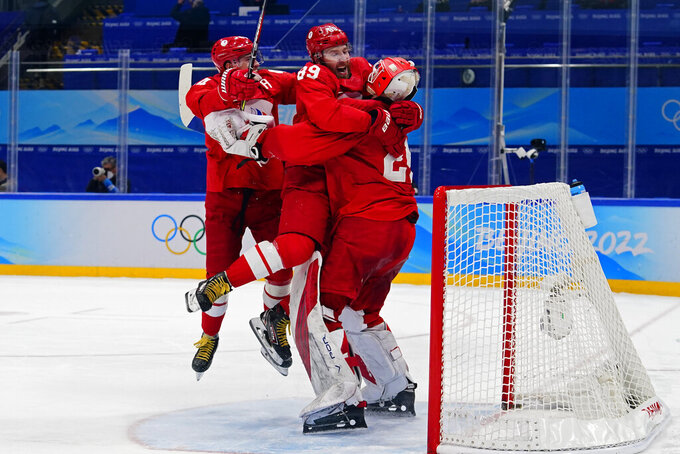 BEIJING (AP) — The Russians are back in the gold medal game at the Olympics, just like they were expected to be.

This run hasn't been as dominant compared to four years ago, but they are still one victory away from winning back-to-back men's hockey tournaments at Winter Games without NHL players. It would be gold just the same, and the Russians are looking to finish things off against Finland on Sunday in Beijing.

“We were building up through the tournament,” Russian forward Damir Sharipzyanov said. “Slow start, not a lot of goals, but we are building, and I like where we’re going and we got to the finals and now it’s the game of our lives for everyone.”

The team representing the Russian Olympic Committee only scored eight goals in its four victories this Olympics and has relied heavily on 25-year-old goaltender Ivan Fedotov, who got them into the final by making six saves in the semifinal shootout against Sweden. Fedotov has a 1.53 goals-against average and .944 save percentage in the tournament, looking a lot like veteran Vasily Koshechkin, who was the starter in 2018.

This is not that team, which loaded up with now-Minnesota Wild star Kirill Kaprizov and longtime NHL stars Pavel Datsyuk and Ilya Kovalchuk. Only seven players are back from Pyeongchang, including six who played in the final against Germany.

“It’s a different team,” defenseman Nikita Nesterov said: “A lot of younger guys, and (now) we got an opportunity.”

That opportunity comes against a stout opponent in Finland, which has not lost a game. The Finns erased a three-goal deficit to beat Sweden in the preliminary round and coasted to the final with their trademarks of good structure and goaltending.

“Every tournament, teams could look good on the paper, but we know that you still need to deliver on the ice," forward Harri Pesonen said. “We’ve managed to control the situation where we are not the underdogs. That shows that we are mentally strong, which is a good thing.”

The Russians are looking for their fifth title at the last six Olympics — with four different names because of dopings sanctions and the break up of the Soviet Union — when the NHL hasn't participated. Finland is going for the first Olympic hockey medal in the nation's history.

“It’s huge for everybody individually, as a team and as a hockey country,” goalie Harri Sateri said. “It is a big thing.”

Finland quickly emerged as one of the top teams at the Olympics and can match the Russians no matter what style of game develops. There's former NHL talent like captain Valtteri Filppula, Leo Komarov and Sami Vatanen on the roster, and Jukka Jalonen is a perfect fit coaching a group of players mostly from European professional leagues.

More than a dozen Finland players come from the Russia-based KHL, so there's plenty of familiarity on either side. Few anticipate a back and forth, high-scoring final.

Sateri, who played for the Florida Panthers in 2018-19, leads the Olympics with a .965 save percentage. The Finns can also put the puck in the net, with Sakari Makkinen among the tournament leaders in goals.

Finland is back in the final for the first time since 2006, a one-goal loss to Sweden. General manager Jere Lehtinen played in that game and has put together a team that is on the verge of making history.

“Going to an Olympic final is like a dream,” Makkinen said. "You dream of those kind of moments, but at the same time (I try to) focus on the right things, not think about it too much and prepare for the next game.”

Russian players were not worried much about facing Finland, confident they can win gold if they play to their potential.

“Game after game we play better,” Nesterov said, “and I think it’s (our) best game in the final.”