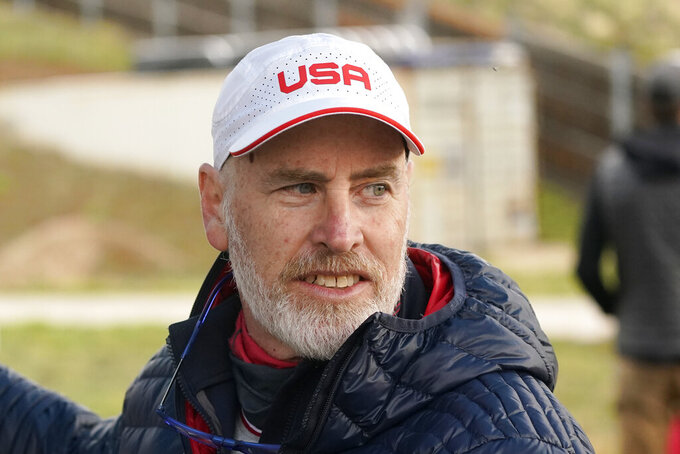 Sean McCann looks on during a Biathlon event at the Soldier Hollow Nordic Center biathlon shooting range, Monday, Oct. 25, 2021, in Midway, Utah. To a casual observer, McCann appeared to be a U.S. biathlon coach helping his team get ready for the Olympic trials race, planned for the next day at the Soldier Hollow Nordic Center. But McCann's not a coach. He's a clinical psychologist who works for the U.S. Olympic & Paralympic Committee — one of seven assigned to various sports teams. (AP Photo/Rick Bowmer)

MIDWAY, Utah (AP) — Sean McCann peered at the targets through a spotting scope and used a hand-held magnetic board to mark where the bullets hit. He showed the results to the athlete as they left the range and then grabbed a broom to sweep shell casings off the mat before the next skier arrived.

To a casual observer, McCann appeared to be a U.S. biathlon coach helping his team get ready for the Olympic trials race earlier this season at the Soldier Hollow Nordic Center.

But McCann's not a coach.

He's a clinical psychologist who works for the U.S. Olympic & Paralympic Committee — one of seven assigned to various teams. At certain times of the year, he is “embedded” with the U.S. biathlon team to help them perform at their best. He lives, trains and travels with the athletes and coaches, interacting with them like a friend.

“In psychology, in particular, sports psychology, those relationships of trust are really important," McCann said. “Part of our job is taking care of the whole person, not just the athlete, because you can’t leave the person at the door."

He may seem casual, but his presence is serous business.

“Being an elite athlete, being an Olympic athlete is very stressful,” he explained. “You're constantly measured, constantly challenged. You're constantly under some sort of environmental stress, so what we do in sports psychology is stress management.”

The issue of mental health in sports became part of the national conversation last year after tennis star Naomi Osaka revealed her bouts with depression. The discussion was amplified when U.S. superstar gymnast Simone Biles withdrew from competition at the Tokyo Olympics, choosing her own health and well-being over the demands to perform.

Biles' courage prompted Michael Phelps, the most decorated Olympian in history and an athlete who has been up front about his mental health struggles, to proclaim “it's OK to not be OK."

“It was a public education,” McCann said of those mental health revelations. It was helpful for the athletes but also important for the public to hear those messages: Have more compassion and empathy with what the athletes are going through.

U.S. cross country skier Jessie Diggins literally wrote a book on the struggles female athletes face as they try to stay fit while dealing with unrealistic pressures to have a certain body type. Skinny isn’t healthy, she said in her book “Brave Enough” about her journey to recover from bulimia.

Diggins has worked with a sports psychologist since she was 19, she said, and she's glad more people feel comfortable talking about it.

“For many athletes, there is a priority on mental health that's coming into focus,” she said. “We all have times when we’re not in a great place and it’s even harder for an athlete when the moment you’re struggling happens to be at the same time as the nation’s spotlight is shining on you.”

Part of her healing process was to talk about her struggles, which was why she wrote the book.

It's been a winning strategy.

Diggins wrote her story after she and Kikkan Randall won Team USA's first-ever Olympic cross-country skiing gold medal in the team sprint at Pyeongchang in 2018. Randall retired but Diggins has gone on to attack the sport with spirit and enthusiasm, winning the overall World Cup title last year and earning repeated podium finishes this year.

She sits in second place in the overall standings heading to the Olympics.

All Olympic sports come with pressure, though McCann notes that biathlon is “crazy”: “It’s two sports that don’t belong together.”

Endurance athletes have the mentality to go as hard and fast as they can, he said. But in shooting, “it’s precision. It's control. It's focus. The mentalities are really different."

So McCann helps the biathletes learn to switch their mindsets depending on where they are in the race. Ski hard when out on the trails, but in the range, execute the shots. “Focus on the process” is a biathlete's mantra.

When a biathlete is shooting, they can't think about the skier who just came in behind them; or that person's heavy breathing; or listen to the sound of other targets going down; or shouts from the crowds or boos when you miss; or the announcer who's broadcasting your progress over the loudspeaker.

And as soon as you think, “If I get this last shot, I'll win the race,” you'll miss. The pressure can be overwhelming.

Russia's Alexander Loginov led the men's biathlon pursuit race in Oberhof, Germany, on Jan. 9 until the last shooting stage. He missed his last three targets and was skiing penalty laps as France's Quentin Fillon Maillet hit all his targets and skied to the win. Loginov finished fifth.

Heading to Beijing, Olympic athletes won’t be able to see their friends and family, which will be an additional challenge.

“So we’ll keep our eye on the ... whole concept of loneliness that can creep in,” Whitcomb said. “Because that’s probably the biggest danger, but that’s why we build what we’ve built.”

Diggins said she plans to do a lot of FaceTime or Skype with family during the separation.

“So in that way, I hope to keep myself sane,” Diggins said. “I also know that there’s going to be a lot of pressure and a lot of different things pulling at me and pulling at my attention.”

So she worked with her sports psychologist to identify what she might face emotionally while at the Olympics, and made a plan for how to react and respond. That plan includes a prohibition on all interviews 10 days before the Games start.

“It’s really important to be able to focus on the team and focus on that happy bubble,” she said,