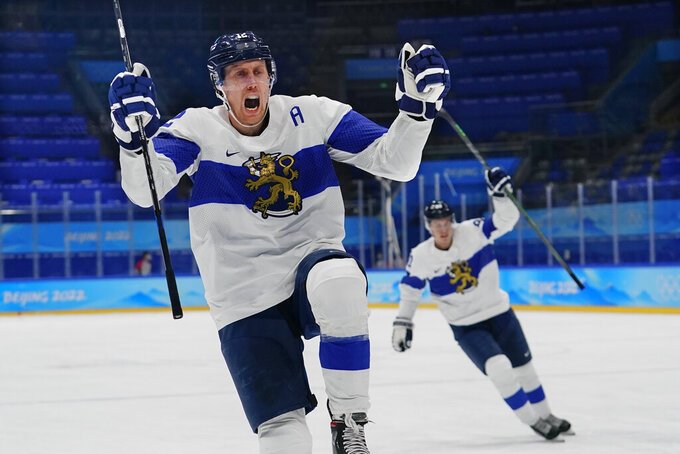 Finland's Marko Anttila, left, celebrates after scoring a goal against Latvia during a preliminary round men's hockey game at the 2022 Winter Olympics, Friday, Feb. 11, 2022, in Beijing. (AP Photo/Matt Slocum)

BEIJING (AP) — Marko Anttila had time for many thoughts while in isolation at the Olympics.

The Finnish hockey veteran spent six days at an isolation hotel after testing positive for the coronavirus upon arrival in Beijing, wondering when he could resume his quest for gold. Anttila returned for the second game of the tournament, scored twice, and took the shot that was redirected for the game-winning goal to beat the Russians in the final Sunday and win the country's first Olympic hockey gold medal.

“I was thinking that we can win something here and how (would) it feel after that to be isolated and win something," Anttila said. “The target was to be here and enjoy and have this dream come true.”

It came true thanks in large part to Anttila, a 36-year-old alternate captain at the Olympics who has worn the “C” for Finland at the past two world championships and is a respected leader in the locker room. Long before getting the primary assist on Hannes Bjorninen's winning goal against the Russians, he scored in his first game back and again in the quarterfinals.

“He’s been scoring big goals lately,” former NHL defenseman Sami Vatanen said with the gold medal hanging around his neck. “It’s unbelievable. He’s a big leader of this team, so everybody just follows him and we got it done.”

Despite feeling no symptoms, Anttila could not skate in the first few practices at the Olympics. Thinking about the possibility of winning the tournament motivated him to do a few extra workouts in his room while biding his time.

There was a lot of time to kill, and the mental anguish was worse than the physical toll.

“I was just lonely in a hotel room,” Anttila said. “It wasn’t easy."

He made it look easy getting back in playing condition. General manager Jere Lehtinen, who played in the final in 2006 the last time Finland got that far at the Olympics, credits Anttila's off-ice routine that has gotten more rigorous with age.

“You have to do that even more and more, and he’s doing a good job for that and that’s why he’s playing at that level,” Lehtinen said. “(You didn't) see any tiredness from him.”

Of course, Anttila wasn't tired. After six days of doing nothing, he had plenty of pent-up energy.

Anttila was joined briefly at the hotel by Jussi Olkinuora, the goaltender in net when Finland came back from a three-goal deficit to beat rival Sweden in the preliminary round finale.

While Olkinuora gave way to Harri Sateri in goal, Anttila's line became coach Jukka Jalonen's pick to start every game. That's because, Lehtinen said, “We know what they can do.” Teammate Harri Pesonen called the trio of Anttila, Bjorninen and Saku Maenalanen the MVPs of the team.

Naturally, they produced the Olympic-winning goal.

“We just work hard together,” Bjorninen said. “We know each other well. And I think we have done that work all the tournament. And today we got a couple of goals, also.”

Jalonen knows Anttila well and is not at all surprised to see this performance at the Olympics.

“He’s mentally a very tough individual,” said Jalonen, who has coached Anttila for more than a decade. “We knew that when he was coming back that he had time enough to get physically in great condition."

When it was taking several days to pass consecutive COVID-19 tests to get cleared, Anttila was making sure he wouldn't need too much time to get back up to speed. That isolation work paid off, and Anttila is now a member of the country's first team to bring home gold.