A first-ever gold - and a lesson - in Olympic skateboarding 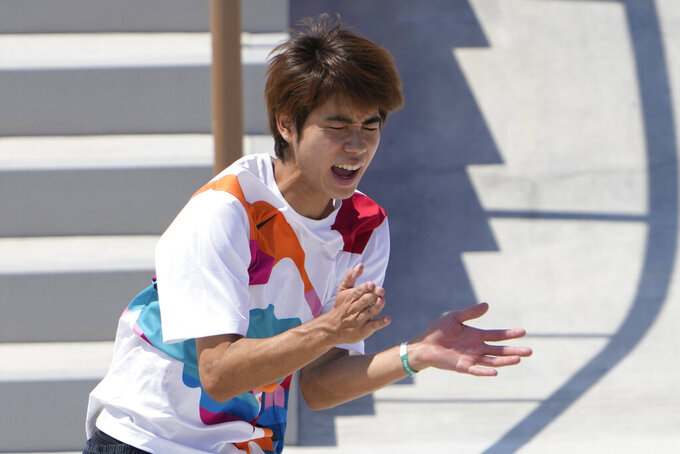 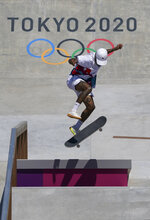 TOKYO (AP) — Had the first-ever Olympic skateboarding champion ridden his board out of the venue where he made history Sunday at the Tokyo Games, he quickly would have come face-to-face with clear evidence that his sport still has a way to go to winning hearts and minds.

Just a quick skate from the Ariake Urban Sports Park, next to a school, a sign reads: “No skateboarding.”

Good luck telling Yuto Horigome to move on. The Tokyo native now has a weighty argument that he should be left alone: a shiny gold Olympic medal won in the city where he learned to skate as a kid and honed his derring-do skills on its teeming streets where skateboarders sometimes aren't welcome.

Skating's Olympic debut delivered exactly what the Games’ organizers had hoped for: a high-adrenaline show of thrills and lots of spills from athletes plugged into younger audiences.

U.S. skater Jagger Eaton, who won bronze, immediately celebrated by whipping his phone out of his pocket and broadcasting live on Instagram.

And Kelvin Hoefler, who used to sleep with his board when he first fell in love with skating as a young boy, was so giddy with his Olympic silver that he started picturing kids back in his native Brazil perhaps putting aside their soccer balls and hopping onto four wheels instead.

"It's going to be mind-changing for them," he predicted.

And perhaps for the Games, too.

The venerable sporting extravaganza had never seen an event quite as, well, chill as this, with laid-back camaraderie and an emphasis on fun among competitors steeped in the “life is a blast” philosophy of their counter-culture pursuit born in freewheeling California. Putting competition aside, skaters whooped and applauded when others landed tough tricks — and hoped that other more buttoned-down sports were taking notice.

“The goal is to progress each sport to the maximum and we can do that without having to bash or cheat,” Puerto Rican skater Manny Santiago said. “The other sports do need that. (At) the cafeteria last night, the majority of the countries, the skate guys, we all sat down for dinner as like, ’Let’s all sit down before the event starts.' You don’t see that in swimming.”

“It got me right in the groove,” he said.

But never finding his groove was skating's standout star, Nyjah Huston of the U.S. He fell repeatedly while trying to land tricks and placed seventh in the eight-man final.

The Californian was among those who struggled with furnace-like conditions in the skatepark of rails, stairs, ledges and other urban furniture that gives the street event its name. The women's street competition is Monday.

“Your feet starting burning up,” Huston said. “Your board like gets so hot that it kind of flexes more. That’s kind of why I fell on one of those tricks out there.”

Still, Huston talked up skating's Olympic debut as a win for skaters everywhere.

“Hopefully, yes, after this people will be more accepting to skateboarding in cities like Tokyo,” Huston said. “We are not out there trying to vandalize or trespass, or the way a lot of people see it. We are just out there doing our jobs, to be honest, and having an awesome time.”

While Huston melted down in the heat, Horigome was ice cool, executing the toughest tricks. His dad skated, and Horigome himself started as a 7-year-old, riding in a park 30 minutes drive from the future Olympic venue.

The 22-year-old had been among the medal favorites after he beat Huston at the world championships in Rome in June.

On his highest scoring stunt, Horigome flipped the board from under him on takeoff and slid it down a jagged rail on its nose, a trick called a nollie 270 noseslide.

That earned a high-scoring 9.5. Horigome was the only skater in the final to score nothing but nines in all of his tricks that counted.

In front of her television, in a residence that overlooks the venue, 8-year-old Ayane Nakamura yelped as Horigome sealed gold with a final trick.

A skateboarder with dreams of becoming an Olympian herself one day, Ayane said she sometimes gets told off for zipping around on her board with its Peanuts motif. Wearing a Japan shirt, she practiced ollies, a basic trick, as she waited outside the venue on Sunday morning, hoping to glimpse the skaters on their way in.