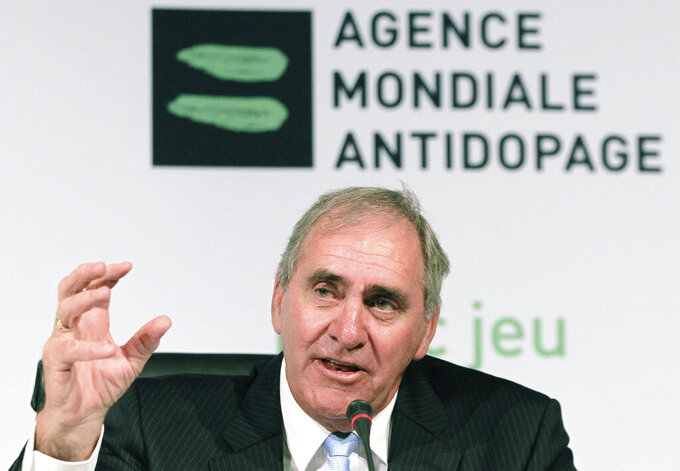 FILE - In this Nov. 12, 2013, file photo, John Fahey, president of the World Anti-Doping Agency (WADA), speaks during a news conference in Johannesburg, South Africa. Fahey, a former president of the World Anti-Doping Agency and a key player in getting the 2000 Summer Olympics for Sydney, has died. He was 75. New South Wales state government officials on Saturday, Sept. 12, 2020, confirmed Fahey's death. (AP Photo/Themba Hadebe, File)

John Fahey had an impressive career in Australian politics and international sport. There were few people, if any, who had a bad word to say about him, a testimony to the New Zealand-born Fahey's genteel and always understanding demeanor.

Fahey, a former president of the World Anti-Doping Agency and a key player in getting the 2000 Summer Olympics for Sydney, has died. He was 75.

New South Wales state government officials on Saturday confirmed Fahey's death, but gave no details. Fahey was premier of New South Wales from 1992 to 1995. He later went into federal politics and served as a cabinet minister in the government of Prime Minister John Howard.

Fahey retired from politics in 2001 shortly after being diagnosed with lung cancer, and had one of his lungs removed.

He recovered and went on to become WADA's second president, succeeding Dick Pound and serving from 2008-13.

The Picton, New Zealand-born Fahey, a former top-flight rugby league player in Sydney, also was known for his big leap in the air in 1993 when Sydney was confirmed as host of the 2000 Olympics.

“Many of us would remember the celebrations that immediately swept the nation after Sydney was announced as the winner — and the image of Mr. Fahey jumping for joy at the news,” New South Wales state Premier Gladys Berejiklian said.

Fahey was in Monte Carlo for the 1993 announcement and was standing next to bid chief Rod McGeoch.

When IOC president Juan Antonio Samaranch announced Sydney as the winning bid, Fahey leapt out of his chair, turning to hug McGeoch.

“This is a very sad day, particularly as we approach the 20-year anniversary of the Sydney Olympics,” Australian Olympic Committee president John Coates, who was also heavily involved in the bid, said in a statement.

“Aside from all John’s considerable achievements in politics and personally, his contribution to the Olympic movement in Australia was immense," Coates said. "His drive and commitment was absolutely crucial in Sydney winning the bid ... and Australia owes him an enormous debt of gratitude for that alone.”

As head of the international anti-doping agency, he established partnerships with the pharmaceutical industry and with law enforcement agencies, including INTERPOL, which increased WADA's ability to identify and detect performance-enhancing substances.

“He brought a wealth of knowledge and experience in the complex worlds of politics and sport to his role as president of WADA and, as a bridge-builder, he executed the duties of that position with fairness, diplomacy and integrity,” WADA said in a statement.

“He had very strong values and always acted in the best interests of WADA and clean sport,” Niggli said. “He felt strongly about making sure that the partnership between all stakeholders worked well for the system and the athletes. He was a true leader, statesman and gentleman, and he will be greatly missed by everyone who knew him and worked with him at WADA.”

“Personally, I am grateful for John’s support and encouragement,” she said in a statement. “He has always been a wonderful role model to generations ."

Fahey is also remembered for crash-tackling a student who fired blank shots at Prince Charles, the eldest son of Britain’s Queen Elizabeth II, at Darling Harbour in Sydney in 1994.

“History will also remember him as a brave man, for his quick-thinking and selfless action to protect Prince Charles from an attack on Australia Day in 1994,” Berejiklian said.

Fahey is survived by his wife, Colleen, his children and grandchildren.

Berejiklian said a state memorial service has been offered to Fahey’s family.