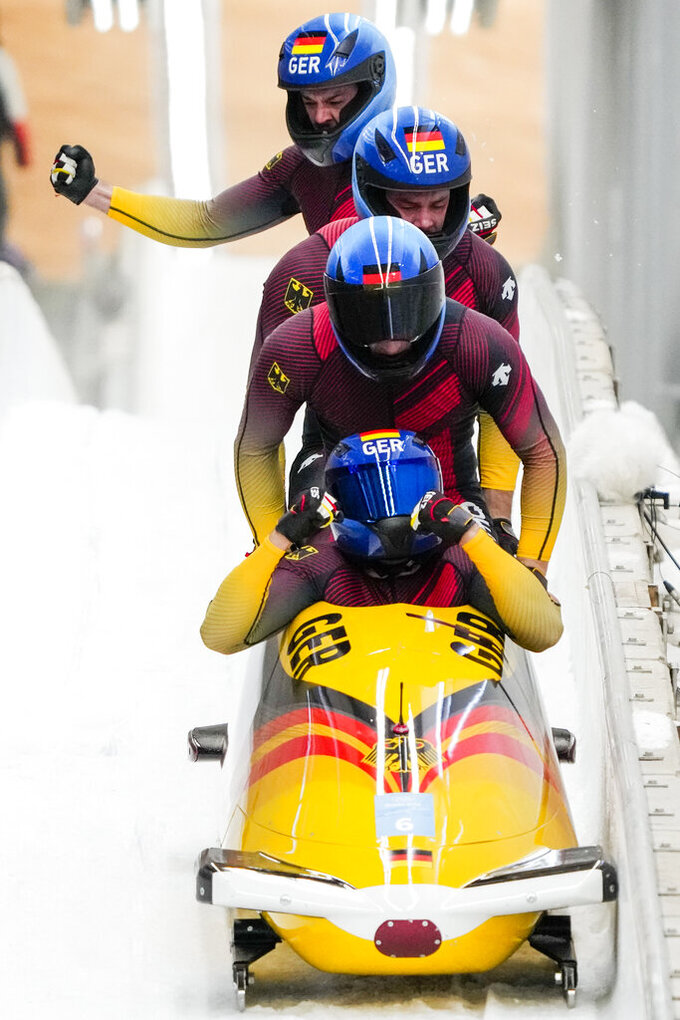 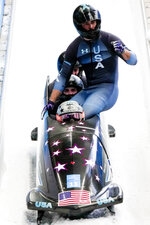 Francesco Friedrich won everything the Olympics had to offer once again.

The world’s best bobsledder finished off a dominating Olympics by the world’s sliding superpower, winning the four-man race at the Beijing Games on Sunday. He won the two- and four-man events at the 2018 Pyeongchang Games, then repeated the feat in Beijing -- the first double-double in Olympic bobsled history.

Friedrich and his team of Thorsten Margis, Candy Bauer and Alexander Schueller finished their four runs in 3 minutes, 54.30 seconds. Germany also grabbed second, with Johannes Lochner — the first-run leader — and his team of Florian Bauer, Christopher Weber and Christian Rasp crossing the line in 3:54.67.

The bronze went to Canada, driver Justin Kripps and his team of Ryan Sommer, Cam Stones and Benjamin Coakwell finishing in 3:55.09. It was Kripps' second Olympic medal, after tying Friedrich for the two-man gold at the Pyeongchang Games.

And now, he's just the second four-time Olympic gold-medal-winning pilot, joining only fellow German Andre Lange in that club. When Lange was at his peak, he was the consensus best driver in the world.

That torch has unquestionably been passed to Friedrich now.

“We did it all to get here again," Friedrich said. “We did an amazing job these four years ... without all the guys, it's not possible to achieve such a moment.”

Kripps thwarted what could have been the second German bobsled sweep of the Olympics — after no nation, before the Beijing Games, had ever grabbed all three medals in a bobsled race until Germany did it in the two-man race that ended last week. Christoph Hafer drove to fourth for the Germans, just 0.06 seconds behind Kripps.

Even without another 1-2-3 sweep, the final numbers were still dominant. The Germans beat the world by themselves.

Bobsled: Germany won three golds and seven medals, while the rest of the world grabbed one gold — Kaillie Humphries’ win in monobob for the United States — and a total of five medals.

The final numbers: nine golds and 16 medals for Germany, one gold and 14 medals for everyone else.

“It’s like we are drunk, but we’re not,” women’s bobsled gold medalist Laura Nolte said. “We’re just drunk on happiness.”

Even without medals, so was Hunter Church.

The American closed his first Olympics by finishing 10th in the four-man, his favorite event. He and his team of Josh Williamson, Kris Horn and Charlie Volker had a final time of 3:57.06, moving up from 13th entering the day to 11th after the third run and then one more spot in the finale.

“These guys were unbelievable," Church said. “It feels really good to have said, ‘Hey, we're coming back and getting into the top 10,' and to be able to accomplish that goal, that means a whole lot."

The U.S. believes it has some momentum now heading into a new Olympic cycle. And it's possible that Church may be able to keep his whole sled together, a rarity for the Americans in recent years.

“The U.S. men's program is going to be in a lot different position in four years, I have a feeling," Church said. “It's exciting."

Frank DelDuca, also ending his first Olympics as a pilot, finished tied for 13th in 3:57.65 with a team of Carlo Valdes, Jimmy Reed and Hakeem Abdul-Saboor.

It was DelDuca’s 22nd, and final, international race of the season. He started on the lower-level North American Cup circuit, racing 16 times between Nov. 7 and Dec. 20 and medaling in every race — seven golds, seven silvers, two bronzes.

That earned him promotion to the World Cup team after the Christmas break, and that was his final springboard toward making the Olympic team.

“We dug deep and gave it everything we had," DelDuca said.

It was the final runs for Valdes and Reed, both of whom are retiring.

“After eight years, I've put everything I had into this sport," Reed said. “Lots of ups, lots of downs. That was a great last run to end my career on."