Ginobili and his Eurostep reach Basketball Hall of Fame 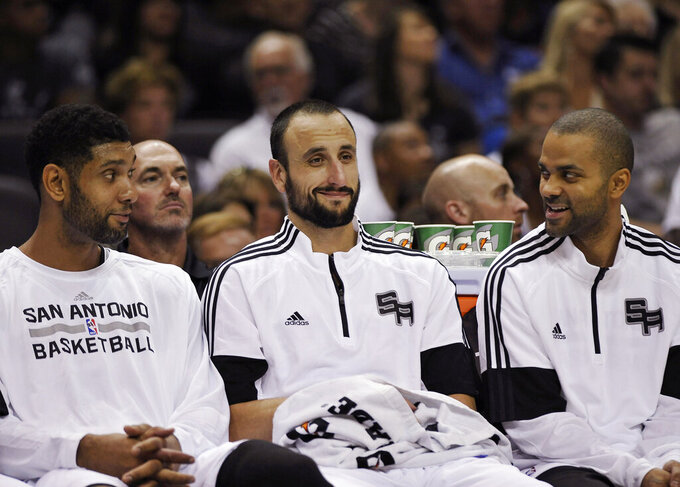 FILE - San Antonio Spurs' Tim Duncan, left, Manu Ginobili, center, and Tony Parker talk on the bench during the first half of a preseason NBA basketball game against the Miami Heat, Saturday, Oct. 18, 2014, in San Antonio. Ginobili is one of the headliners for Saturday night’s enshrinement ceremony in Springfield, Massachusetts. Ginobili spent all 16 of his NBA seasons in San Antonio, partnering with Tim Duncan and Tony Parker to form a Big Three that is, and surely will remain, one of the best trios the league has ever seen. (AP Photo/Darren Abate, File) 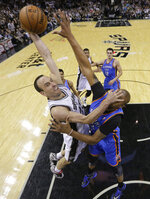 The first clue that, no, Manu Ginobili did not invent the Eurostep should come from the move’s name. Ginobili isn’t from Europe. He’s from South America. And it’s not called the South Ameristep.

Perhaps it should be. The long, lateral move — step one way to get a defender leaning, then cut the other way into open space — was Ginobili’s signature, something he mastered, something that he brought into the mainstream.

In turn, it brought him to the Basketball Hall of Fame.

The four-time NBA champion with the San Antonio Spurs is one of the headliners for Saturday night’s enshrinement ceremony in Springfield, Massachusetts. Ginobili spent all 16 of his NBA seasons in San Antonio, partnering with Tim Duncan and Tony Parker to form a Big Three that was, and surely will remain, one of the best trios the league has ever seen.

“It’s something you never expect,” Ginobili said of entering the Hall. “You start playing ball because you love it, because it’s fun, because you’re there with your friends. ... And now, when I thought there were not going to be more surprises after my career was done, you get a recognition like this which makes you think, go back a little bit in time, and relieve your story, and it’s incredible.”

Ginobili isn’t the first international NBA player to make the Hall. He is, however, the first to be selected by the North American committee, which means he got into the Hall solely on the merits of his NBA career and not what he did playing internationally.

He’s quick to point out that he won’t be the last name on that list. Parker, Dirk Nowitzki and Pau Gasol will be getting their calls before long.

The Spurs drafted Ginobili in 1999, when he was playing in Italy, and it took more than three years for him just to come to the NBA. It’s not like San Antonio had made a huge investment: Ginobili was the next-to-last pick in his draft class, 57th out of 58. And most of the players taken in the bottom 15 picks of that draft never played a single game in the NBA.

“I didn’t know what the hell it was,” Spurs coach Gregg Popovich said. “But it didn’t look right.”

Turns out, it was legal and lethal. The true measure of whether a move has captured the attention of NBA players comes by seeing if others have copied it and tried to put it into their own repertoires. And that’s been happening for two decades now.

Nobody knows for sure how the move truly originated, and Ginobili insists that he didn’t create it, either. The commonly held belief is that Lithuanian great Sarunas Marciulionis — a Hall of Famer himself, class of 2014 — brought it to the NBA.

But there isn’t much argument that Ginobili is the one who made it popular. Thing is, he can’t teach it very well, despite being asked countless times to do so over the years.

“I couldn’t exactly explain it,” Ginobili said. “Some basics of it, yes, but it was super natural, it was super instinctive.”

It’s not the move that got Ginobili into the Hall, though. It was the winning.

When Ginobili played, the Spurs won. It’s that simple. They were 762-295 when Ginobili appeared during the regular season. That winning percentage of 72.1% is just a smidge better than the 71.9% posted by Duncan, who went into the Hall in 2020 and, fittingly, will present Ginobili this weekend.

Ginobili is one of two players (Bill Bradley being the other) to have won championships in the NBA, the Euroleague and the Olympics. He got four rings with the Spurs, the Euroleague title with Italian club Kinder Bologna in 2001, then led his native Argentina to Olympic gold at Athens in 2004. Ginobili had 29 points in the semifinal win over the U.S., outplaying everybody else who was on the court that day, Duncan included. The Americans haven’t settled for anything less than gold at any of the four Olympics that have been played since.

“It’s not just about individual accomplishments,” Ginobili said. “I never won a scoring championship, an MVP, even first-team. I’m here because of my surroundings, of the players I play with, of the coaches I’ve been coached with, and the organizations. I know I’ve been very lucky to have played with such teammates ... so definitely, I don’t take it as an individual achievement. It’s just that I’ve been in the right place, in the right time.”

Ginobili didn’t know what, or even where, San Antonio was when he first went there. He never left — it’s still home for Ginobili and his family. He works for the Spurs now, drives his three kids to and from school, takes them to Argentina for time with family every summer, and then it’s back to San Antonio.

“I didn’t know how I was going to pair up with Tony and Tim, play with David Robinson, being coached by Pop, so yeah, full of uncertainties,” Ginobili said. “And I wanted to do good, I wanted to help, I wanted to grow, but I wasn’t the No. 1, first pick, right? I was 57, so I knew that the odds of me staying for long here were not with me because it doesn’t usually happen. So, it turned out to be an incredible story and enjoyed 16 wonderful years.”

There’s another place that Ginobili hasn’t been: Springfield, Massachusetts.

He was with Duncan for his enshrinement two years ago, but because of the pandemic, that ceremony took place at a casino in Uncasville, Connecticut. Ginobili didn’t get to Springfield on that trip.

“We knew we had a wild, competitive, young man who was in love with basketball and was quite athletic and just fierce,” Popovich said. “Just seemed to have no fear and do whatever it might be that he needed to do to win. He was a force of nature.”