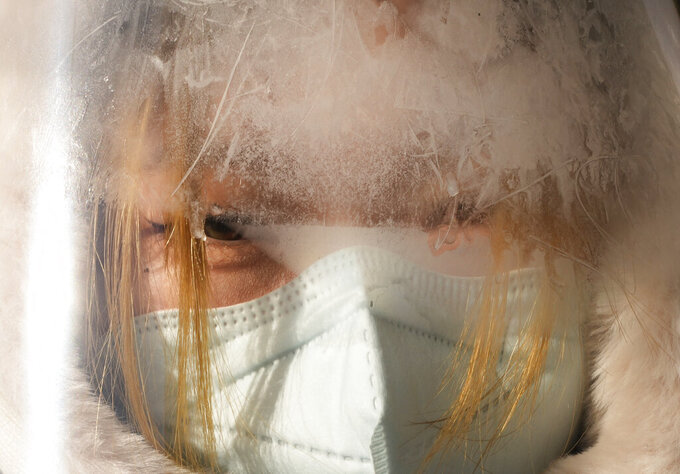 Frost covers a face shield of a volunteer before the start of the women's 7.5km + 7.5km skiathlon cross-country skiing competition at the 2022 Winter Olympics, Saturday, Feb. 5, 2022, in Zhangjiakou, China. (AP Photo/Alessandra Tarantino)

BEIJING (AP) — She was standing alone, bundled against the cold, as the bus doors swung open at the remotest mountain site of the Beijing Olympics. Her job was to point visiting journalists where to go — not that they had many options in these locked-down games.

All you could see behind the mask were her eyes and gold-tinted hair, and then only barely. The plastic face shield she wore to protect against the coronavirus had fogged up and frosted over in the frigid air of Zhangjiakou.

Foreign visitors at these Olympics are strictly segregated from the public under China's zero-tolerance virus containment strategy. They are in China but have little access to the country or its people.

The thousands of mostly young volunteers working in and around the venues are some of the only Chinese people they'll meet here, often in fleeting exchanges where masked smiles and hand gestures help overcome the language barriers.

“They are so nice and kind, and try to be very helpful,” AP photographer Alessandra Tarantino, who captured the shot, said of volunteers like her subject, whose name she didn’t get.

The Rome-based Tarantino would spend the next three hours outside shooting cross-country skiing on the first day of competition Saturday. She soon learned how punishing the conditions can be.

“The cameras freeze and the battery goes down really fast. When you put your face near the camera, there’s fog and you cant see the viewfinder,” she said. “When the temperature is low, the camera is like ice.”