For Goepper, another Olympic medal and clear outlook on life 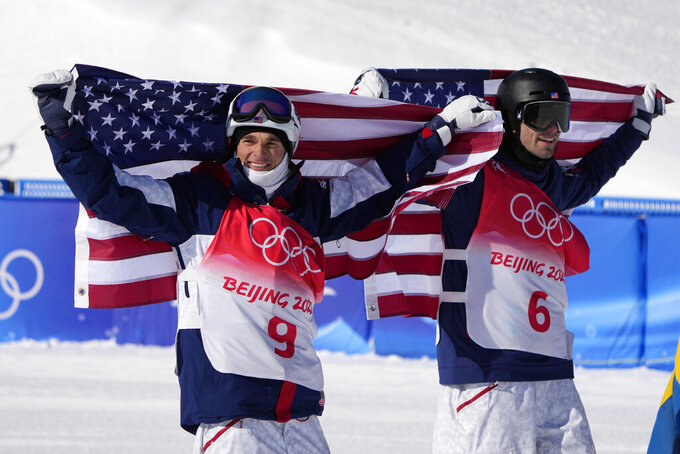 ZHANGJIAKOU, China (AP) — Before even thinking about going big on the slopestyle course, freestyle skier Nick Goepper had to work on something more important — himself.

The newly minted Olympic silver medalist cheerfully announced he's “doing good" these days from a mental health perspective. That's notable given some of the dark days he encountered after first climbing the Olympic podium, eight years ago in Sochi.

“I’ve done a lot of work off the slope on myself,” Goepper said Wednesday after finishing behind teammate Alex Hall. “Even more work there than I’ve done on the slope.”

As last year's Summer Olympics approached, and then during the Tokyo Games themselves, Naomi Osaka, Simone Biles and Noah Lyles were among the big-name athletes who unapologetically brought the subject of mental health, and the way it impacts athletes and the public, to the fore.

Goepper, who had been outspoken about his own struggles long before that, said he appreciated that he had company.

In years past, he had told about contemplating suicide shortly after Sochi. He entered a rehab facility. He said he alienated friends and family, then had to win back their trust. He had to rediscover his passion for skiing.

“That's the most important — to get a good foundation, just as a person, before you can go kick (expletive) and do corks,” Goepper said.

For Goepper, the post-2014 experience equaled a classic case of “Post-Olympic Depression.” Athletes, especially in the Olympic world, work their whole lives for a moment that can take 60, maybe 90, seconds. They win. Or lose. The torch goes out and the shine from the Games fades. In the case of sports such as freestyle skiing, life goes on and most people turn the page.

A 2020 HBO Sports documentary narrated by Michael Phelps, “The Weight of Gold,” spoke poignantly on the topic, with everyone from Phelps to Shaun White to Lolo Jones to Bode Miller relating their experiences.

Since that movie, the COVID-19 pandemic has persisted. The added stress from training delays, uncertain schedules and the bummer of making the Olympic journey without friends and family on hand only made the experience more harrowing. The U.S. Olympic and Paralympic Committee has doubled down on offering mental health resources.

“I’ve been really impressed with the popularization of mental health awareness and the recovery tools and all that stuff over the last four or five years,” Goepper said.

He thinks the overall topic of depression shouldn’t be confined to what happens inside the lines.

Life after China is setting up to be sweet for the 27-year-old from Indiana. This silver goes with the silver he won in Pyeongchang and the bronze he took as part of a U.S. sweep in 2014. He joins Canadian moguls standout Mikael Kingsbury and aerialist Jia Zongyang of China as the male freestylers who have amassed that sort of haul.

“If you told me as a 16-year-old that this is what would be happening right now, I would tell you that you were crazy,” Goepper said. "Life is good. I’m super grateful for everything that’s happened in the last couple of years. Life’s a roller coaster but to get another medal out of another Olympics it’s just a cool thing.”

He's not ready to commit to a run at a fourth medal. “Ask me in the morning," he said.

Or maybe next week. Or next month. When he gets home, he's got other trails to blaze.

"I've got a brand-new snowmobile in my driveway,” Goepper said. “I can’t wait to go ride it.”