Injured Olympian gets big air in big-cat costume for kicks 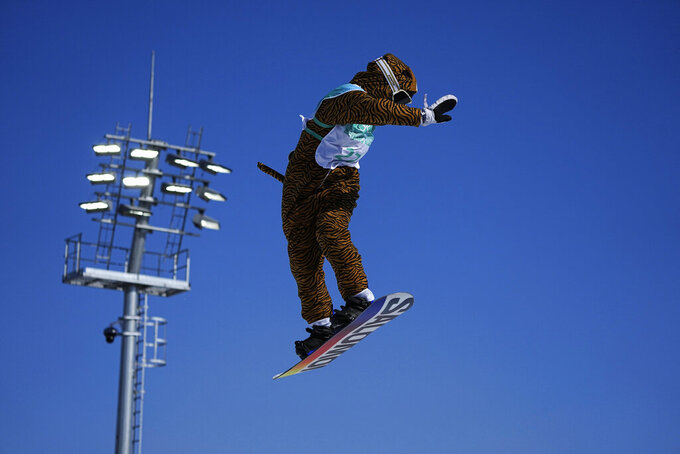 BEIJING (AP) — There were no tail grabs for this tiger.

French snowboarder Lucile Lefevre was a crowd pleaser at Big Air Shougang all the same.

The 26-year-old helped Beijing ring in the Year of the Tiger by putting on an orange-and-black big-cat costume during qualifying Monday in women's big air and miming a pair of claws while some 20 feet off the ground.

Lefevre decided a year ago that the Beijing Olympics would be her last snowboarding competition, then hurt her knee during last week's slopestyle event. The injury prevented her from trying any tricks coming down the 155-foot big air ramp, but she still wanted to participate.

So she borrowed a head-to-toe tiger suit from Swiss snowboarder Nicolas Huber, giving a little flair to her otherwise straight-forward jumps.

Lefevre took the first of her three runs in her standard French jacket, amusing spectators by waving to cameras instead of performing a trick.

She broke out the tiger jumpsuit for Round 2. Lefevre scratched at the air for that jump, but after watching a replay, she realized the motion just looked funny in mittens. So on her final turn, she waved toward the judges' tower instead.

“It was not super beautiful," she said of her claws. "So I decided for the last one to just say hi to the judges. And especially the French one, because it’s a friend of mine.”

Asked why Huber had the costume to begin with, Lefevre explained that “he's a crazy man, actually.” The 27-year-old Huber has been wearing it for a series of videos on his Instagram, apparently inspired by Lunar New Year celebrations that overlapped with the start of the Winter Games.

“I asked yesterday if he can give it to me for the day, a special day for me," Lefevre said. "And he said ‘Yes, of course.’”

Lefevre finished dead last, but that was no bother for a two-time Olympian who never figured on being here.

When she was 3, Lefevre was diagnosed with osteochondrosis, a rare illness that stunts bone growth. She had three operations, and doctors told her sports were off the table.

“I said, ‘OK, I just want to do some easy sports,’” she recalled. “And then I tried snowboarding.”

She's ranked as high as seventh in the slopestyle World Cup rankings, carving out a career as a pro athlete that her body can't quite sustain anymore.

She wanted to go out with a message: “Right now, there is a lot of problems in the world, and if everyone is peace and easy, the world will be better for sure,” she said.

As for what this cat is doing with the next of her nine lives ... Her father, Thierry, owns a sailing school, and she plans to work there during the summer. In the winter, she’s hoping to teach snowboarding to youngsters.

First, though, she planned to soak in one last turn in the Olympic spotlight.

“Everyone wants a picture with me," she said.