Inside the Olympic bubble, looking for China — or 'China' 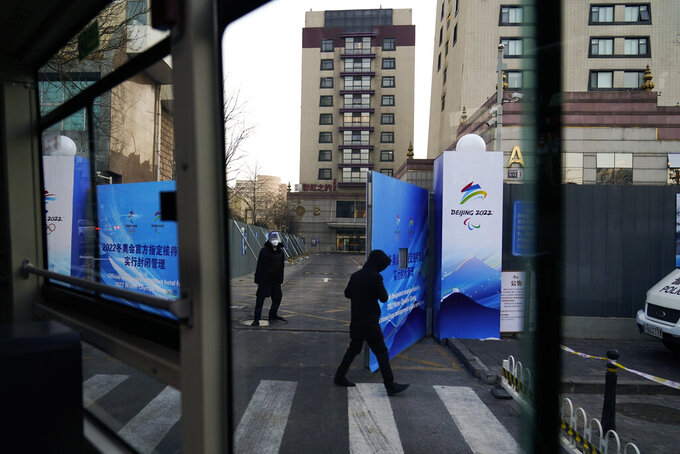 BEIJING (AP) — Explore Guangzhou's old city. Wander a historic neighborhood in Shanghai. Visit with the giant pandas out west in Sichuan province. All these experiences are available to those attending the Beijing Olympics. By videolink — without ever leaving the press center.

Welcome to China. But not really.

The Olympics are usually a once-in-a-generation opportunity for the host country to showcase its culture. This year, however, athletes, coaches and others traveling to the Winter Games in Beijing are entirely sequestered in a bubble so complete that it even contains its own intercity trains. It's all part of the elaborate effort by China to control the spread of COVID-19 (and, some say, control the curious visitors as well).

Nothing is supposed to leave this alternate universe. But what clues of China might seep in?

The country is celebrating Lunar New Year. That much is clear. Traditional lantern decorations adorn the streets outside (as seen from the Olympic shuttle buses) and the venues inside. You’re unlikely to participate in any actual celebrations — but the Games' swag bag includes a small lantern decoration. If you have the souvenir, did you also have the experience?

Forget a visit to the Summer Palace or the Great Wall, but there are large cutout photos of these landmarks in the press center. Would a selfie taken at just the right angle in front of one make it seem as if you were there? Does having the photo mean you sort of were?

One genuine part of China does pierce the bubble (even as it preserves another): Except for places where the International Olympic Committee provides the Wi-Fi, visitors to the Games are blocked from vast swaths of the internet by the country's “Great Firewall.” A small taste of what it might be like to live in China — and an insight into the ways the government seeks to control its people.

Inside the bubble, unsurprisingly, there is a lot of longing for what is outside. In one the world's great culinary destinations, only pale imitations of Chinese food are available. Tabitha Peterson, a curler for Team USA, recalled that she and her sister, fellow Olympian Tara, visited Beijing in 2007. Back then, they were able to immerse themselves in the culture, she explained, to eat in restaurants, to try new food.

Not at these Cruise Ship Olympics, in which participants do not so much enter China as sidle up to it.

Still, Yao Qian, who is staffing a cultural exhibit in the press center, said foreigners were able to experience something of China — pointing to a recent workshop inside the bubble where they learned how to write Chinese characters as part of New Year celebrations.

With little to visit or photograph, many inside the bubble are keen to participate in another tourist pastime: purchasing souvenirs. Disappointment rippled through its denizens in the days before the opening ceremony because there did not seem to be that much to buy. Where were the plush toys of Bing Dwen Dwen, the chubby panda mascot? Where were the T-shirts and hats with the rings? Eventually the shop began filling up, and now a line of eager would-be consumers stretches out the door all day, every day.

“I didn’t know if what you would find in the bubble would really be authentic,” Jackson Haselnus, who works for Olympic Broadcasting Services, the host broadcaster for the Games, said as he waited in the line.

And actually he’s still not sure: It’s his first time to China, and he admits he has nothing to compare it to. But at least, he can come away with some Olympic pins — one of the prized purchases at any Games. Most of the others waiting with him were Chinese volunteers who assist at the Olympics.

Which makes you wonder: Who is visiting whom? While the athletes, officials and journalists coming from abroad are hoping to visit Beijing, the volunteers are visiting the Olympics themselves. And they want their souvenir, too.

Tourism is always a mediated experience. Marita Sturken, a professor of media, culture and communication at New York University, notes there are a series of practices that define tourism, all of which are available to those inside the bubble: We visit the iconic sites (the Bird's Nest stadium is inside), we buy a souvenir, we take a photo.

Which gets someone living inside the bubble to thinking: If you were able to travel outside of it, what would you come away with? What could you learn about China — a vast, diverse country with a long, complicated history — in just a few short weeks?

Perhaps the bubble merely highlights what is always true: that a foreign place, a foreign culture is always ultimately inaccessible, whether the barriers are cultural, linguistic or physical.

In Beijing, the fences surrounding each hotel or venue are just the start. Language also poses an obstacle, leading to a frequent pantomime between visitors and locals, where each furiously types something into his device, hits translate and shows the result to his interlocutor.

There are all the pandemic impediments, too. Masks abound, of course. And even when they come off so their wearers can eat, a new barrier appears: a sheet of plexiglass that separates each diner from her neighbor.

While packaged tours get a bad rap, Sturken says even the most controlled experience can offer insight.

“We tend to look down on tourism as if it’s an inauthentic activity that’s searching for authenticity,” she said. But “you can’t, as an American, go to China and not have your world view challenged, even if you go on a packaged tour. Even when it’s a contained and scripted experience, it still has value.”

The search for authenticity leads many to wander the cordoned-off area outside the main press center, where they can approach the fence that separates “Beijing” from Beijing. Here, the real city is within shouting distance. But when it comes to communicating with passersby, what is there to say? Those inside the bubble do not need to know how to get to the Forbidden City or a recommendation for a good local restaurant.

And there it is. A genuine interaction with genuine Beijingers. A moment of spontaneity to recount back home. And isn't that what travel is all about?

London-based Associated Press journalist Sarah DiLorenzo is on assignment at the Beijing Olympics. Follow her on Twitter at http://twitter.com/sdilorenzo