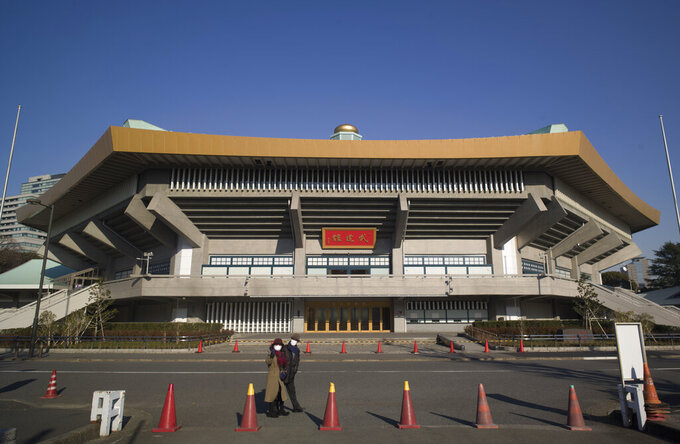 FILE - In this Thursday, Jan. 21, 2021, file photo, a man and a woman walk past the Nippon Budokan arena in Tokyo. Judo is coming home at the Tokyo Olympics, and the Japanese team is under a world of pressure. As if this eight-day tournament wasn’t already significant enough, the players will compete at the Nippon Budokan, the hallowed arena built for the first Olympic judo events. (AP Photo/Hiro Komae, File) 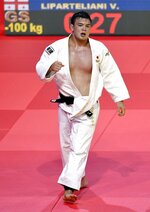 Judo is coming home at the Tokyo Olympics, and the Japanese team is under a world of pressure.

Fortunately for the host nation, this powerhouse group of athletes is eager to rise to the momentousness of this moment in their sport, which was born in Japan and introduced to the Olympics at the previous Tokyo Games 57 years ago.

This competition in the martial art created by Jigoro Kano in the 19th century is among the most anticipated events in Tokyo this summer. Judo's combination of athletic force and cerebral grace is no less than an aspirational hallmark of the Japanese soul, its essence filtered through decades of patient study and training to synchronize technique and strength, to merge body and spirit.

The Gentle Way — judo's literal translation — is fundamental to the Japanese Olympic movement, but the judokas charged with preserving this tradition don't always think in such enlightened terms.

Just ask Naohisa Takato, who will compete in the men's 60kg (132 pounds) category on the first day of the Olympics.

“I had enough of the humiliating experience of ending up with a bronze medal in Rio," Takato said. "In the Tokyo Olympics, I’ll definitely seize the gold. With whatever kind of judo, however unrefined that could be, I’ll get a gold medal and play ‘Kimigayo’ (Japan’s national anthem) in the awarding ceremony.”

As if this eight-day tournament wasn’t already significant enough, the players will compete at the Nippon Budokan, the hallowed arena built for the first Olympic judo events. Japan won three of the four available gold medals in 1964 at the Budokan, now considered the spiritual home of martial arts.

“It’s such a lucky opportunity to attend the Olympics in Japan where judo was born," Japanese 100kg (220 ponds) Olympian Aaron Wolf recently told Japan's Sportiva magazine. “I want to win on this stage. My goal is a gold medal.”

That's true for every player on Japan's loaded team, which is expected to add to its historical haul of 39 gold medals and 84 total medals in judo — both more than in any other sport in its long Olympic history.

Just how stacked is this Japanese lineup? The All Japan Judo Federation sent none of its Olympic team members to the World Judo Championships in Budapest this summer, yet Japan's backups still came home with six golds, four silvers, two bronzes — far more medals than any other nation — and a perfect performance to win the mixed team competition.

That led to interesting post-match scenes such as in the men's 66kg (145.5 pounds) division, where Japan's Joshiro Maruyama won gold by beating Olympic-bound Manuel Lombardo. The Italian is ranked No. 1 in the world, but Lombardo said he had been discouraged from competing in Budapest because a loss to a Japanese second-stringer might affect him negatively heading to Tokyo.

Maruyama missed out on the Olympics last December after an epic, winner-take-all match — the first of its kind in Olympic team history — at the Kodokan against Hifumi Abe, who won 20 minutes into golden score. Millions of fans watched on Japanese TV, and millions more caught it online around the world.

Maruyama and Lombardo still embraced after their bout, sharing the camaraderie and sportsmanship for which their sport is justly famed.

“Since Lombardo is fighting in the Games and I didn't qualify, I wanted to give a big cheer for him,” Maruyama said through a translator.

All of Japan’s stars will be tested, and not all are gold medal favorites. The rest of the world has dynamic champions, and the biggest is 6-foot-8 French heavyweight Teddy Riner, who won two Olympic gold medals and went undefeated in 154 consecutive matches for a full decade from 2010 to 2020 until he lost twice last year, including a surprise defeat handed out by Japan's Kageura Kokoro.

Kokoro won’t be in the Olympics, however: Hisayoshi Harasawa, who lost to Riner in the Olympic final in Rio de Janeiro five years ago, was picked for another shot at the games.

This tournament also features the first mixed team competition in Olympic history, to be held July 31 on the final day of competition. Twelve nations with teams of three men and three women apiece will compete in six-bout sequences, bringing a proper team dynamic to a highly individual sport.