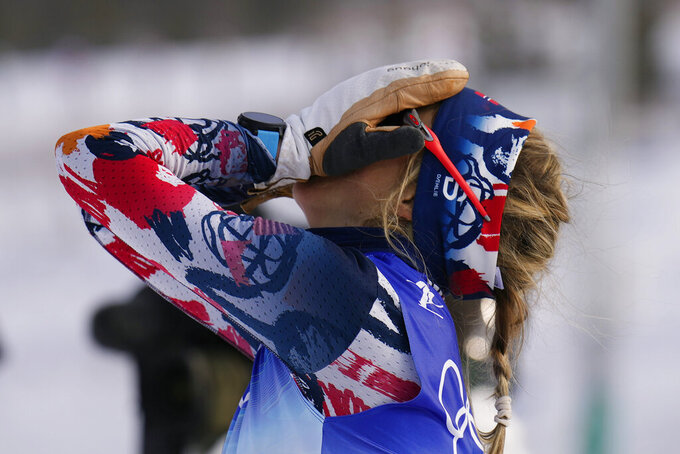 The Norwegian great added another title to her tally by winning the 10-kilometer classic race five days after winning the first gold medal of the Beijing Olympics.

Johaug glided around the cold, windy course in 28 minutes, 6.3 seconds. As she watched others come in with slower times, realizing the gold was hers, she shouted and howled, throwing her head back and pumping her arms in the air.

But it was close. Really close.

Kerttu Niskanen of Finland, who started after Johaug, was 11 seconds ahead at the 8.6-kilometer mark but lost some time in the final stretch. She crossed the line only .4 seconds behind the Norwegian.

Johaug said she heard that Niskanen was skiing fast behind her, so she kept pushing.

“I tried to give my best in the last part of the race and I feel that I have a lot of energy and that I’m racing good but I hear also that Kerttu was racing really good behind me so I tried to focus on myself and I crossed the finish line and was really like, whoa,” Johaug said. “We are both the winners today in my head."

It was Niskanen’s first Olympic medal.

“I have been many, many times in fourth place in championships and at Olympics and maybe I thought medals are not for me,” Niskanen said. “But today I did it and I’m happy this is my first medal.”

Krista Parmakoski of Finland earned bronze, 31.5 seconds behind Johaug. But her performance was also close.

As Russian athlete Natalia Nepryaeva, the overall World Cup leader, came toward the finish line, her time was slightly faster than Parmakoski. She ended up .1 second behind in fourth.

Johaug won the skiathlon on Saturday, the first gold medal awarded at the Beijing Games. After that race, she said “when you have tasted this gold medal, you want more.”

She's making up for lost time.

Johang missed the 2018 Pyeongchang Games after being suspended in doping case involving a steroid in lip balm.

“When your career is up and down and you are being so down, it means more when you are coming back and you reach your goal,” Johaug said. "You have to work, work, work and you can reach your goal and do the best of the situation you are in.

“That was my mind when I've been out for two years.”

This year's Olympic 10-kilometer (6.2-mile) cross-country race was in the classic ski style and covered two laps of the five-kilometer course. The race alternates between classic and freestyle every Olympic cycle.

Ragnhild Haga of Norway won gold at the 2018 Pyeongchang Games by skiing freestyle. She was a late addition to the Norwegian team for this year's Olympics after a teammate tested positive for COVID-19, but didn't race Thursday.

The last time the 10K race was classic was at the 2014 Sochi Games. Johaug took bronze in that race behind gold medalist Justyna Kowalczyk of Poland and silver medalist Charlotte Kalla of Sweden.

Jessie Diggins, an American who earned bronze in the sprint race, finished in eighth place on Thursday.

“I’m just so thankful for the awesome skis and a chance to just practice that power striding," Diggins said. "This was a great-feeling classic race for me. I’m really proud of how I paced it. I’m happy.”