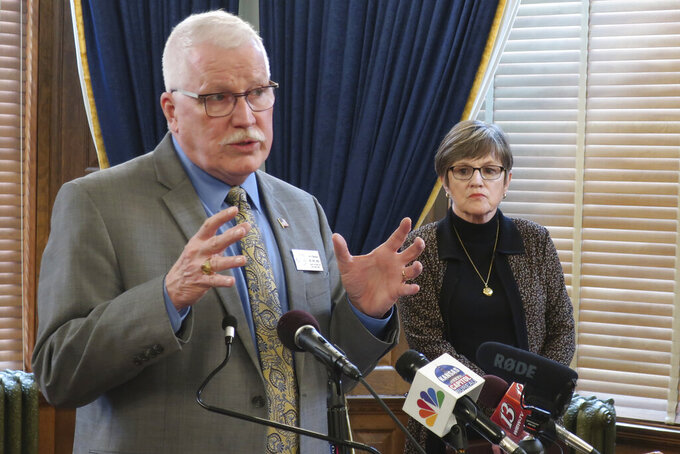 TOPEKA, Kan. (AP) — Kansas Gov. Laura Kelly faced questions Thursday over the state's monitoring of GPS data gleaned from people's cellphones about how residents have cut down on travel during the coronavirus pandemic.

But Kelly defended the state Department of Health and Environment's use of the data. She said its compilation was “harmless” to individuals and that it helped Kansas focus efforts to promote social distancing where they're needed.

“Right now, the only thing that we are thinking about, really, is how to protect the health and safety of Kansans,” Kelly said during a daily COVID-19 briefing. “We know that the less people are moving around, the flatter that curve will be and — not trying to be histrionic here — we will save lives.”

Dr. Lee Norman, the health department's head, has cited the data in at least two briefings and has used it to publicly scold Kansas residents for not taking social distancing seriously enough. The information is provided by data-analysis firm Unacast on a publicly accessible website that grades states and counties on social distancing based on how much they've reduced their travel.

A public-interest law firm, the Kansas Justice Institute, is demanding that the Democratic governor provide more information about how the information is collected and used, expressing concerns about privacy and other civil liberties. The law firm is a subsidiary of the free-market, small-government Kansas Policy Institute, a think tank that is influential among conservatives in the Republican-controlled Legislature.

The Justice Institute also sent copies of its letter to legislative leaders and Kansas Attorney General Derek Schmidt. Samuel MacRoberts, its general counsel, said the state so far has been “circumspect” in moving to contain the COVID-19 threat, but the disclosure of the use of Unacast data was a surprise and "the details matter.”

Minnesota Gov. Tim Walz, also a Democrat, cited Unacast data on March 24 in praising his state's social distancing. That was a day before he issued a stay-at-home order. A similar order from Kelly took effect Monday.

Unacast said in a statement Thursday that it uses data from tens of millions of devices, but that the “data is always in aggregate or anonymized and never shows individuals’ behavior.”

The data measures how much people collectively have reduced travel from normal and gives each state and county a letter grade. The latest grade for Kansas is a C-minus, with 18 of its 105 counties mostly in western Kansas, receiving an F.

Kelly urged Kansas residents to check out the website, calling it “a simple visual tool.”

“You will see how harmless it really it is, but how useful it can be to the state as we are trying to message,” Kelly said. “That's how we're going to use that data. There's nothing else that we can or would do with it.”