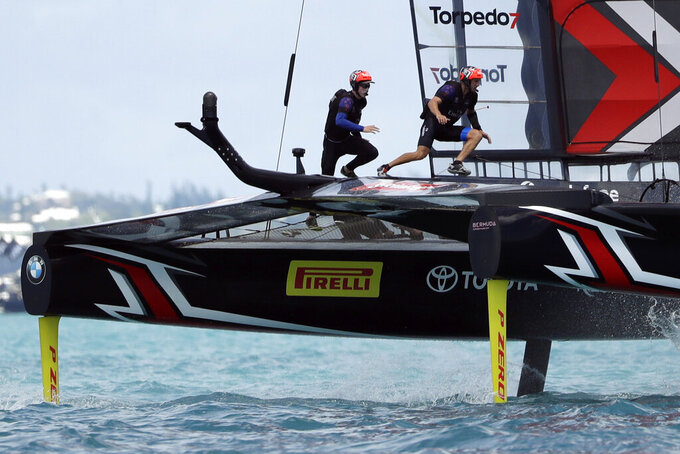 FILE - In this June 26, 2017, file photo, Emirates Team New Zealand helmsman Peter Burling, left, and teammate Blair Tuke cross the boat during the ninth race in America's Cup sailing competition against Oracle Team USA in Hamilton, Bermuda. As they hit what could be the prime of their careers, Burling, 30, and Tuke, 31, are thinking about more than just their next victory. Sure, they're focusing in on trying to win another gold medal in the high-performance 49er skiff in the Tokyo Olympics starting later this month. They also realize that as the victories pile up, they're in a unique position to speak out about protecting the planet's oceans. (AP Photo/Gregory Bull, File)

The world’s oceans have given New Zealanders Peter Burling and Blair Tuke the chance to accomplish so much at relatively young ages.

Together the New Zealand sailors have won Olympic gold and silver medals; helped their country win and then defend sailing’s greatest prize, the America’s Cup; and recently started a team in SailGP, a global league that features a who’s who of sailing. Separately, they competed in the grueling Volvo Ocean Race in 2017-18.

Dominating regattas in the world’s fastest sailboats is their thing. Along the way Burling, 30, and Tuke, 31, founded the conservation charity Live Ocean, believing that their small island nation needs to step up to the challenge to protect and restore the world’s oceans.

Their immediate focus is on the Tokyo Olympics and continuing to dominate above the waterline in the high-performance 49er skiff. But they also know that as the victories pile up in the prime of their careers, they’re in a unique position to speak out about what’s going on below the waterline, whether it’s in Hauraki Gulf — where they successfully defended the America’s Cup in March — in the South Pacific or elsewhere on the planet.

“We’ve had some pretty good results, but it really feels like there’s a lot more out there,” Burling said from Australia, where they’re putting in final preparations for Tokyo. “Definitely the work we’re doing in the marine conservation space is a big driver to really use the platform in sport to drive a really positive change for New Zealand and the world.”

Said Tuke: “We see the opportunity that we have still competing and being able to shine a light on ocean health and use what we’re doing in sailing to get more eyeballs onto that. That’s been great.”

The 2017-18 Volvo Ocean Race was about the only thing Burling and Tuke didn’t win in the last five years. But it’s what they saw — and didn’t see — on that trek that prompted them to take action.

“It’s an incredibly complex problem and the one for me is what you don’t see,” Burling said. “You look out the window at a healthy ocean or an unhealthy ocean and they don’t look so different. I sailed around the world being able to count the amount of whales we saw on one hand and the bird life in the South Pacific wasn’t anywhere near what we’ve been told stories of what it should it be like.

“At that stage you didn’t really realize why, but since you dive into the science you really start to understand what’s going on out there and the problems became pretty apparent pretty quickly that we really needed to actually do our part and try to create a positive change,” he said.

Burling and Tuke are prime examples of New Zealanders’ affinity for the ocean.

Tuke said it’s easy for some Kiwis to take the ocean for granted because they don’t see a lot of the damaging effects that bigger, more populous countries do.

“But on the same token we see an opportunity for us to really lead the world in these issues because if we can’t do it in New Zealand, then it’s going to be difficult for anyone else around the world to,” Tuke said.

Burling and Tuke have been sailing together since 2008. An email exchange between the two is on display at the New Zealand Maritime Museum, along with their gold medals from the 2019 49er world championships in Auckland.

Burling initiated the exchange, telling Tuke he was “keen to helm the 49ers with someone” and asking if he was interested.

Tuke responded that they should look into sailing together and added: “The fast boats got a hold of you ay? haha but seriously i think that’s awesome that you are keen on sailing a 49er!”

After taking the silver medal in the 2012 Olympics, Burling and Tuke dominated the 49er class the following four years and clinched the gold medal in the Rio de Janeiro Olympics with two races to go. The following summer, with Tuke as a crewman, Burling helmed underdog Emirates Team New Zealand’s 50-foot foiling catamaran, brimming with design breakthroughs, to a stunning 7-1 win in the America’s Cup against two-time defending champion Oracle Team USA.

In March, they once again drank Champagne out of the Auld Mug after beating an Italian team 7-3 in foiling 75-foot monohulls.

Countryman Sir Russell Coutts, who won a gold medal at the 1984 Olympics and once sailed undefeated through three straight America’s Cup matches, for two different countries, is impressed with what Burling and Tuke have achieved.

“They seem to be able to jump into different classes and adapt very quickly,” said Coutts, who signed Burling and Tuke to head the Kiwi team in his SailGP league. “Obviously they’ve got a good process they go through. They don’t waste a lot of time. They’re able to do more sailing ventures and basically have a chance to win them all, which is pretty incredible. They’re multi-talented in a few different disciplines.”

Burling and Tuke have indeed settled on a formula.

“I think we’re both pretty easy-going people but we’re ultimately driven to try and achieve what we want to,” Burling said. “Obviously our partnership keeps growing as it goes on longer and longer.”

Tuke said the two have extensive debriefs after each major regatta and don’t rush into the next one.

“We’re both driven to achieve the goals we’ve set out but you’re not tied down to how we’ve done it before or how different people have done it before,” Tuke said. “We’re always looking for new ways to approach situations and then try to enjoy the journey. We both feel pretty lucky to be doing what we’re doing so we make sure we enjoy that along the way.”