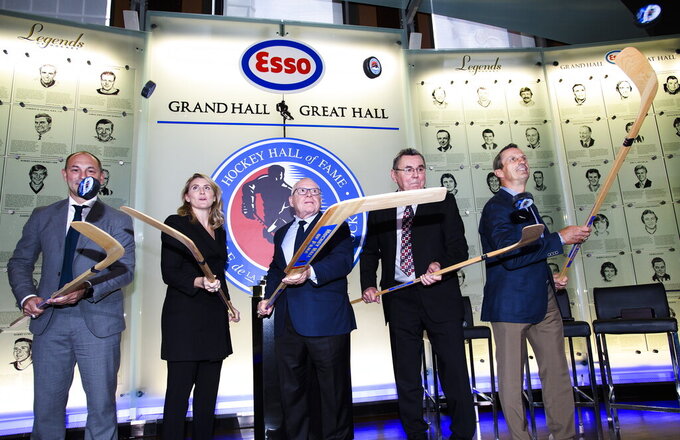 FILE - In this Nov. 15, 2019, file photo, Hockey Hall of Fame inductees, from left, Sergei Zubov, Hayley Wickenheiser, Jim Rutherford, Vaclav Nedomansky and Guy Carbonneau flip pucks in the air during a ceremony in Toronto. The Hockey Hall of Fame has postponed its 2020 induction because of the pandemic. The ceremony was to have taken place Nov. 16 in Toronto. (Nathan Denette/The Canadian Press via AP, File)

he Olympic Council of Asia has postponed the sixth Asian Beach Games in China to April 2-10 next year because of the coronavirus pandemic.

The games were initially scheduled to be staged in Sanya, China, from Nov. 28-Dec. 6. The OCA says the decision to push the dates back was taken in collaboration with the Chinese Olympic Committee and the local organizers. As was the case for the Tokyo Olympics, which were pushed back to the middle of 2021 by the IOC, the name — Asian Beach Games Sanya 2020 — and the logo will remain unchanged.

An OCA general assembly to decide between Doha, Qatar and Saudi capital Riyadh as host for the 2030 Asian Games had been scheduled to be held on the sidelines of the games in Sanya.

The delayed beach games on the southern Hainan island will begin a crowded schedule for multi-sports events in China, with Beijing set to host the Winter Olympics in February 2022 and Hangzhou hosting the Asian Games six months later.

Texas Gov. Greg Abbott said colleges should continue trying to find ways to have a college football season that would protect player health in the coronavirus pandemic.

Texas is home to five Power Five conference schools in the Big 12 and SEC, and several other major college programs.

“I think schools should work with (players) on protocols to make sure their health can be maintained and secured and allow them to play. Once they are able to establish that, we can work out how many people to let in the stands to watch.”

A Republican, Abbott pushed Texas toward one of the nation’s quickest reopenings of the state economy in May, only to dial it back when COVID-19 cases, hospitalizations and deaths rapidly increased. New cases and hospitalizations have stabilized and decreased, but coronavirus deaths in Texas have reached nearly 8,500.

The state’s rolling positivity rate has rapidly increased to nearly 20 percent, nearly double its rate of just over a week ago.

The Mountain West has become the second FBS conference to postpone its football season, punting on the fall with an eye toward playing in the spring.

The Mountain West’s decision comes less than a week after it announced plans to play an eight-game conference football season and allow its members to pursue two nonconference games.

Now the 12-team Mountain West, which includes Boise State, Air Force and San Diego State, joins the Mid-American Conference as leagues from the highest tier of NCAA Division I football to bail on the fall season and hope to make a go of it in the spring.

The University of Virginia says no student-athletes tested positive for the coronavirus last week. The school has had four positive results since fall programs returned to preseason training.

The school says a total of 238 athletes were tested for COVID-19. There have been no positive results since a report was issued on July 24.

None of those that tested positive required hospitalization, and those with the positive results were instructed to self-isolate for 10 days or until they did not register a fever for three consecutive days. Those deemed to have been in close contact also were asked to self-quarantine for 14 days.

Southeastern Conference Commissioner Greg Sankey has weighed in on the powerhouse league’s situation regarding a decision on the football season.

Sankey posted on Twitter he doesn’t know if college football can be played during the COVID-19 pandemic. He said the best advice he has received since the pandemic started was to be patient in making decisions. “This is all new & you’ll gain better information each day,” Sankey posted.

“We know concerns remain,” Sankey said. “We have never had a FB season in a COVID-19 environment. Can we play? I don’t know. We haven’t stopped trying. We support, educate and care for student-athletes every day, and will continue to do so...every day.”

The College of Charleston is suspending all sports competition for the fall because of the coronavirus pandemic.

The school said all athletes would continue training in anticipation of spring competition. Its winter and spring sports teams are still on track to compete when those seasons are scheduled.

Charleston athletic director Matt Roberts said the school suspended fall sports for the safety and well-being of its athletes, coaches and staffers.

The season-ending Tour of Guangxi in China has been finally canceled.

The Chinese government last month canceled all international sports to the end of the year, and organizers of the cycling race made their exit from the calendar official on Monday. The men's race was postponed from October, overlapping the Giro d’Italia, to November, towards the end of the Spanish Vuelta.

The UCI also has taken the women's Tour of Chongming Island in China, which was postponed from May to Oct. 23-25, off the calendar without a public word.

The Hockey Hall of Fame has postponed its 2020 induction because of the pandemic. The ceremony was to have taken place Nov. 16 in Toronto.

The Hall said Monday it will discuss rescheduling plans on Oct. 29. Chairman Lanny McDonald said the most likely scenario is to have the ceremony in November 2021, either by waiving the 2021 election or combining the 2020 and 2021 classes. He said a virtual induction ceremony was ruled out.

Old Dominion is canceling its fall sports season because of the coronavirus pandemic.

President John Broderick made the announcement Monday, saying he knows student-athletes and fans will be disappointed, but playing “posed too great a risk.”

The decision was made with input from athletic director Wood Selig, medical and health experts and state and local officials, he said.

Selig said he hopes that fall sports can be played in the spring if it’s safe and has NCAA approval.

“This is just right thing to do for everyone involved,” Selig said.

The Women's Rugby Europe Championship is scheduled to be finished off in October so European qualifying for the 2021 Women's Rugby World Cup can start in December.

Rugby Europe announced the dates for the two remaining matches: Spain vs. Russia on the weekend of Oct. 24, and Spain vs. Netherlands on Oct. 31.

The winner among those three will join Scotland, Ireland, and Italy in qualifying for the 2021 World Cup in New Zealand.

European qualifying will be played on the weekends of Dec. 5, 12, and 19. The winner qualifies directly, and the runner-up goes to a repechage. The schedule will be announced after the Women's Europe Championship is finished.

The FCS school said the Lions’ leadership council voiced those concerns to the coaching staff Saturday.

North Alabama said in a statement Monday the school will “make every attempt to structure a meaningful football experience for this fall while remaining focused on health and safety.”

North Alabama has switched, until at least Friday, to a model in which players can voluntarily continue physical conditioning in groups of 12 or fewer. Team and position meetings will be held in person with social distancing and masks mandatory.

UTEP has postponed the start of preseason football practice after four players tested positive for the coronavirus.

School officials say all four players were asymptomatic and placed in a 14-day quarantine. School medical staff also recommended the entire team and coaching staff also go into a five-day quarantine before everyone is tested again on Wednesday.

Results of those tests will be determined when practice will begin, the school said.

“I am fully supportive of the recommendations of our sports medicine personnel and team doctors,” coach Dana Dimel said. “We can’t wait to resume preparations for our fall season, but safety comes first.”

The Miners play in Conference USA.