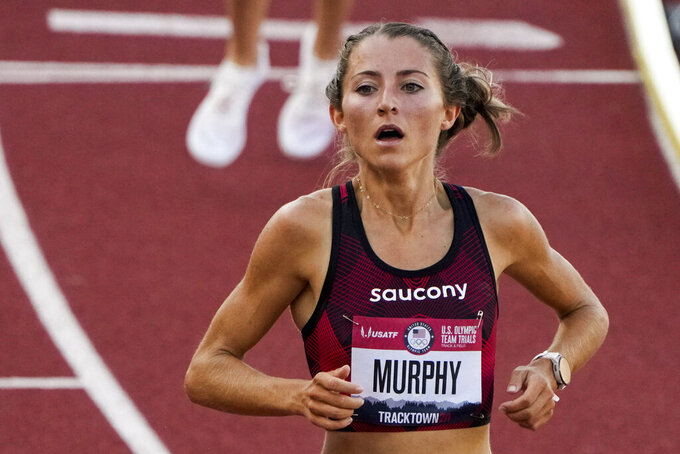 Will Claye won the triple jump on his last attempt.

Had the Olympics been held last summer, Claye may not have been ready. He was working his way back from a torn Achilles he suffered in November 2019 while grabbing a rebound in a friendly basketball game. Claye figures to be one of the favorites at the Tokyo Games.

Elise Cranny used a late kick to pull away for the win the women's 5,000 meters Monday at U.S. trials and make her first Olympic team.

Joining her in Tokyo will be Karissa Schweizer and Rachel Schneider.

Cranny, who went to college at Stanford after winning state titles as a high schooler in Colorado, finished in a season-best 15 minutes, 27.81 seconds on a sweltering day at Hayward Field. The temperature was 93 degrees when she crossed the finish line.

The 23-year-old Nilsen cleared 19 feet, 4¼ (5.90 meters) to earn a spot at the Tokyo Games. He held off Kendricks and KC Lightfoot, who tied for second after both missed three times at Nilsen’s height.

Kendricks captured the bronze medal at the 2016 Rio de Janeiro Olympics. He also won the world title in 2017 and ’19.

Clayton Murphy won the 800 meters at U.S. Olympic trials to lead a field that will not include the reigning world champion Donavan Brazier.

Murphy, the bronze medalist at the Rio Games, finished in 1 minute, 43.17 seconds. Isaiah Jewett and Bryce Hoppel grabbed the other two spots.

Brazier, who won world championships two years ago in Doha and was considered a favorite in this race, came in eighth.

It was the second big upset at trials in the span of 10 minutes, coming on the heels of Jenny Simpson's 10th-place finish in the women's 1500.

It was 94 degrees at Hayward Field when the starting gun went off. An NBC thermometer on the track showed the mercury pushing 120.

Elle Purrier St. Pierre won the 1,500-meter race in an Olympic trials-record time to earn a spot at the Tokyo Games.

Pole vaulter Sam Kendricks, triple jumper Will Claye and 800-meter runner Donavan Brazier are among the Olympic gold-medal contenders trying to win their way to Tokyo on Day 4 of U.S. track and field trials.

Kendricks, a two-time world champion, Claye, a two-time Olympic silver medalist, and Brazier, the reigning world champion, are all competing Monday at Hayward Field, where temperatures reached into the low 90s when action began late in the afternoon.

Spots will also be awarded in the women's 5,000 meters, the men's javelin throw and the women's 1,500 meters. In that event, Nikki Hiltz, who came out earlier this year as transgender, is among the favorites to earn one of the three spots available on the U.S. Olympic team.