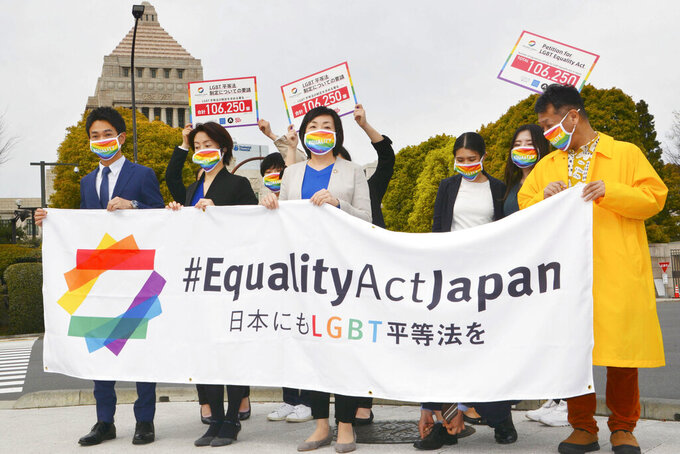 Activists gather in front of parliament before they submit a petition in Tokyo Thursday, March 25, 2021. LGBTQ and other human rights activists submitted a petition with over 106,000 signatures to Japan's ruling party Thursday, calling for an LGBT equality law to be enacted before the Tokyo Games, saying Japan as host nation should live up to the Olympic charter banning gender and sexual discrimination. (Kyodo News via AP)

TOKYO (AP) — Activists submitted a petition with over 106,000 signatures to Japan's ruling party Thursday, calling for an LGBT equality law to be enacted before the Tokyo Games, saying Japan as host nation should live up to the Olympic charter banning gender and sexual discrimination.

Their action came on the day the Olympic torch relay began in the northern prefecture of Fukushima counting down to the Games that start in July.

“Many LGBT people in Japan are still discriminated against ... We need legislation to guarantee human rights and equality of LGBT people,” said Yuri Igarashi, director of the Japan Alliance for LGBT Legislation, one of four main groups that organized the petition. “It is a responsibility for a host nation to legalize the equality act.”

Japan has slowly shown increased support and awareness of sexual diversity but lacks legal protections, while dozens of other countries have allowed same-sex marriages and enacted other laws protecting the rights of sexual minorities.

Pressure to conform still forces many lesbian, gay, bisexual and transgender people to hide their sexual identities fearing discrimination at school, work and even from their families. Transgender people must get their reproductive organs removed before their gender can be changed on official documents — a requirement that international medical experts and human rights groups criticize as inhumane.

But recently, a district court in Sapporo, in northern Japan, ruled that the prohibition of same-sex unions violates the constitutional right to equality. That case has no immediate legal impact but could promote public support for equal rights.

The ruling party has promised to raise its awareness of LGBT issues and says it is working on legislation “to promote understanding,” but the move is expected to face strong resistance from the conservatives in the party.

Fumino Sugiyama, a transgender activist and former Olympian in fencing, said at the news conference that few Japanese LGBT athletes have come out because of fear of discrimination or disappointing their families, and they worry about hurting their future career and relationship with athletic organizations.

“I believe a change in the athletic community could be a driving force toward a social change," Sugiyama said. “We call for the equality law so that we can achieve a society where not only LGBTQ people but everyone can live in a safe and secure environment."