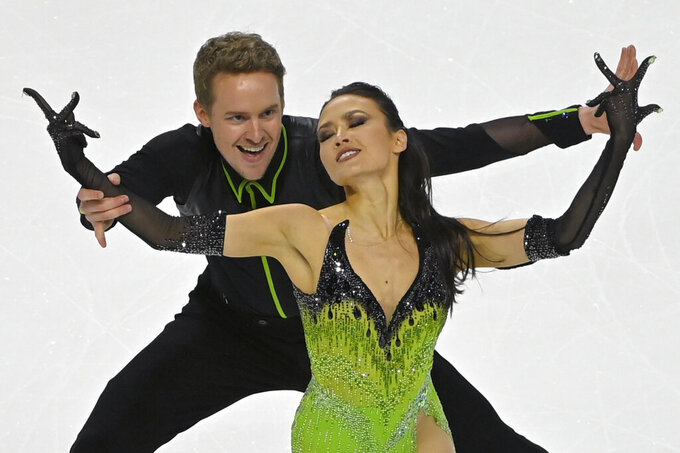 So you think the Olympics frazzle the nerves more than any event? Well, how about just getting to the games?

Three of America's premier skaters of yore — Olympic gold medalist Tara Lipinski, silver medalist Tanith White and three-time U.S. champion Johnny Weir — explain that the stress at the national championships can be as excruciating as anything the Olympics cause.

As U.S. skaters, led by three-time world champion Nathan Chen, and outstanding ice dance couples Madison Hubbell and Zach Donohue, and Madison Chock and Evan Bates, prepare for nationals during the first week in January in Nashville, they need to be aware of the pressure ahead.

“When you represent one of the big skating nations, the national championships almost feel more important than the Olympics at times,” says Weir, who along with Lipinski and Belbin are the prime analysts for NBC's coverage of figure skating. “Because you are competing against very strong skaters for one of three spots. In terms of stress, the nationals in an Olympic year felt like a mini-Olympics for me.”

Adds Lipinski, the 1998 winner at the Nagano Games:

"The game plan is always different in an Olympic year. There is a lot strategy used in planning out a skater’s Olympic quad. You hope to peak in the last season as you head into the games. The other seasons are used for preparation and experimenting with new elements or style, all in the hope that you evolve into the best version of yourself for the big event.

“If you are a favorite for the team, nationals is the place to get that last confidence boost before the Olympics. If you are a hopeful, it’s a very intense event where you have to lay it all on the line; for many it’s their last shot at their Olympic dream. The anticipation and anxiety of a national championships in an Olympic year is always at a palpably high level.”

Maybe not so much for Chen or for the two ice dance duos who are among the world's elite. But a strong performance in Nashville would be a boost heading into a month of preparation, practice and strategy for Beijing.

Hubbell/Donohue, who barely missed the 2018 Olympics podium, and Chock/Bates have been staples on the international scene for years. White, skating as Tanith Belbin with Ben Agosto during her competitive career, believes they still will have to battle nerves.

“Physically, my experience was that the preparations for nationals are mostly the same in an Olympic season,” she says, “but mentally, it can be a far bigger challenge than in non-Olympic years. The pressure to not only perform your best and place well but also qualify to the Olympic team is immense, and there’s no avoiding that tension during a championship weekend. At the hotel, in practice, backstage, you can’t escape it. So you need to be sure you come to nationals equipped with practiced mental tools to help manage that stress, rather than trying to avoid it.”

The United States doesn't have any other likely medals contenders, but simply the opportunity to participate in an Olympics is a tremendous incentive during a national championships. And there are several other Americans with Olympic experience: Bradie Tennell and Karen Chen among the women; Vincent Zhou and Jason Brown among the men; Alexa Knierim, who competed in Pyeongchang pairs with husband Chris and now partners with Brandon Frazier.

Weir likes the looks of the men's field.

“The three men who’ve proven themselves on the national and international stage, Chen, Zhou and Brown, in my opinion, are the best three skaters to represent USA at the Olympics,” he says. “They bring different strengths, qualities and personality to the event, and I believe Chen and Zhou are definitely in the medal hunt. I would be shocked if someone outside those three men, makes the team.”

“I believe Alysa (Liu) is on track to win another title as her fairly consistent triple axel and very consistent triple-triples give her the edge,” she says of the 16-year-old two-time U.S. champ who only this season was old enough to compete at the senior level. "The next two spots will make for exciting competition. There are pros and cons going for all the contenders.

“Bradie Tennell has the goods and the experience to easily make another team, but her injury has kept her out of the season. Her return to prime form is still a question mark. Mariah Bell has been waiting for this moment for so long. She has finally found consistency and her artistry and passion give her the edge amongst a few of her younger teammates. But her triple-triple has been inconsistent and she will need that element — a good one at that— at nationals.

"Karen Chen has experience and body of work on her side. We have witnessed how that came to her aid just last year in making the world team. Karen is in a league of her own when it comes to artistry and the component score, so with a solid skate, making the team is very likely.

“Amber Glenn has the secret weapon of the triple axel but it has not shown up in competition in the way she’s been hoping it would. But if she nails that triple axel and delivers a clean skate, it may be hard to leave her off a team again this year.”