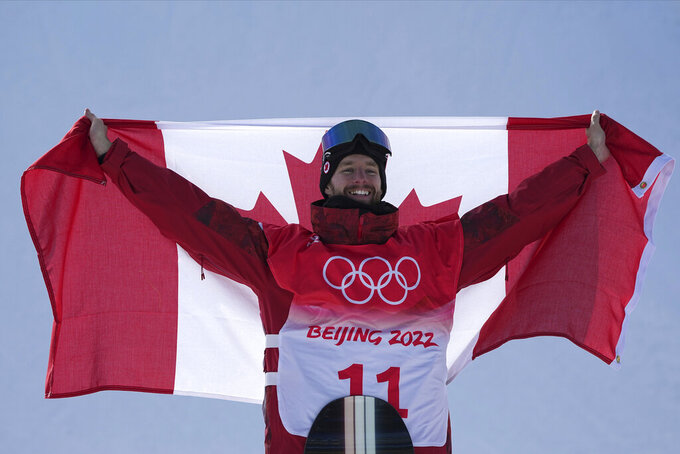 Parrot acknowledged to The Associated Press on Saturday that he failed to fully execute a grab on the first jump of the slopestyle course and said he was lucky the judges didn't see it. He maintains he still had the best run of the day and earned his first Olympic gold.

McMorris finished third, 2.43 points behind Parrot, close enough that he would have taken silver if the judges had dinged Parrot for the missed grab. McMorris told CBC on Friday he deserved to beat Parrot and Chinese silver medalist Su Yiming.

Parrot said McMorris apologized to his face Saturday morning. McMorris also tweeted to say he was sorry later in the day.

“I let my emotions get the better of me in the days following slopestyle and I want to sincerely apologize to Max,” he wrote. “I’m amazed by what you’ve overcome and I’m extremely proud to have shared the podium with you. Let’s get another one for @TeamCanada.”

Parrot said there were no hard feelings.

“He actually came to me earlier today and he apologized for his non-sportsmanship," Parrot said. “I told him no worries.”

McMorris declined to be interviewed Saturday.

Parrot and McMorris are set for another showdown Monday, when qualifying begins for big air. The event will be scored by the same nine-judge panel that was immediately criticized at Genting Snow Park on Monday after broadcast replays clearly showed Parrot grabbing his knee instead of his board.

The lead official on the panel told snowboarding website Whitelines that the judges weren’t provided with replays or shots of some of the angles that were showing up on social media after the contest.

Parrot said the judging process needs an adjustment. He advocated for judges to have more access to slow-motion replays and bemoaned that panels are rushed into decisions because of time constraints created by television broadcasts.

“They probably missed a lot of other things as well on other riders' runs that day,” Parrot said. “But you know, I understand the focus is on me, as I've won.”

Parrot got his gold about three years after beating cancer, but the feel-good story was quickly undercut by the controversy around his first trick.

The 27-year-old Parrot said he briefly had a hand on his board during his jump, but that it slipped off. He ended up grabbing his knee instead, an error akin to taking an extra step, or falling, in a gymnastics floor routine.

After winning, Parrot found replays of Su's and McMorris' runs. He said he spotted three “little mistakes” during McMorris' turn, and also noted a few errors by Su.

“I didn’t have any mistakes on five of the six features,” Parrot said. "And on the one jump, I had a bigger mistake. And yeah, I definitely say that it’s a big mistake to not be able to hold the grab for the whole time.

“But how do you compare that? One big mistake versus multiple, small mistakes over the most technical run? That’s why it’s a judged sport.”