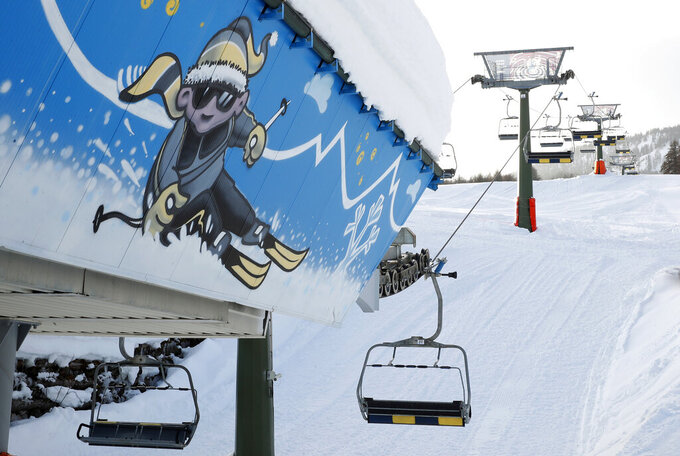 A closed chairlift in Cortina D'Ampezzo , Italy, Thursday, Jan. 28, 2021. The granite peaks that majestically encircle the northern Italian winter resort of Cortina glimmer with one of the most prolific snowfalls in years, a cruel joke of nature as Italy’s ski areas have been laid silent by the COVID-19 pandemic. (AP Photo/Antonio Calanni)

CORTINA, Italy (AP) — The granite peaks that majestically encircle the northern Italian town of Cortina d’Ampezzo glimmer with one of the most prolific snowfalls in years, a cruel joke of nature while the COVID-19 pandemic silences Italy’s winter resorts.

Cortina will flash across TV sports channels for two weeks this month as the past and future Olympic host city holds the 2021 World Ski Championships, sending downhill skiers flying down precipitous slopes. But the event will occupy just a fraction of the available hotel rooms, and it is unlikely to bring much business to the town's luxury boutiques. No spectators are allowed.

In fact, the spasm of activity looks to be a mere flicker in a ski season that seems destined to never take off, as the Italian government delays reopening lifts to leisure skiers. The world championships will provide good optics in view of the 2026 Milan-Cortina Winter Olympics, but scant economic relief for local businesses and workers who live off the winter sports economy, which has been shut down for almost a year.

“Absurdly, we made snow in November, because we couldn’t know there would be so much and the slopes had to be prepared,” said Marco Zardini, the chief executive of Cortina Skiworld, which normally operates 35 ski lifts across four areas but only has four lifts going now for use by local clubs and aspiring world-class athletes who must keep in shape for future seasons.

Italy’s 2019-2020 ski season closed unexpectedly early last March, when the country became the first Western country pummeled by the pandemic. A new season has yet to launch, unlike in neighboring Switzerland, which in December allowed lifts to open with restrictions, or in Austria, where residents still can ski. France's ski lifts remain closed at least through February.

In Italy, the pandemic-related closures are a hit to an industry that generates 1.2 billion euros ($1.5 billion) in annual revenues and employs 5,000 permanent and 10,000 seasonal workers, according to the association of ski lift operators, ANEF.

The association said last year's early end to the season led to a 20% revenue decline and called the current season a total loss. Factoring in hotels, restaurants and other services, the ski industry generates 11 billion euros ( $13.2 billion) in annual revenues, but travel restrictions have kept activity near zero on top of the stilled lifts.

“Mountains, you cannot leave abandoned to themselves. They need to be taken care of,’’ ANEF President Valeria Ghezzi said.

The paradox is that 2020-21 would have been a season for the record books in Cortina, and elsewhere across Italy’s Alps, where snow has been in abundance, Zardini said.

In any season, Cortina’s tony Corso d’Italia shopping street can compete with Milan’s Montenapoleone Golden Triangle for its concentration of luxury brands, including Dior, Fendi and Moncler. But shops are empty of customers and most hotels are shuttered. Many hotels have several feet of snow piled on rooftops and terraces.

In a normal year, Italians account for just over half of Cortina’s nearly 1 million annual visitors, and Americans are the top foreign visitors, ahead of Germans and Britons.

While global fashion brands can hope to balance the precipitous drop in business with booming sales in China, that's not the case for local businesses. Bruno Pompanin Dimai, the owner of a sports store, called the season “a disaster” for Cortina. He has sold just a few pairs of boots and one ski jacket all winter. His only comfort is that ski brands have promised not to update their offerings next season so he will be able to sell his leftover inventory.

“With all this snow, I would have worked double,’’ Dimai said.

Ingrid Siorpaes, who runs a local handicrafts shop, said sales are down 90%. The only people walking down the snowy main street are locals and people riding out the pandemic in their second homes.

“We stay open, even if I had to lay off a salesperson,’’ Siorpaes said. “This store is missing foreign tourists.”

It’s not so different in other ski areas across the Alps and along the Apennines where instead of generating cash, many lift operators are racking up costs for a season that may never arrive.

While ski resorts generate cash over four months of the year, maintenance and upkeep are year-round costs — something ski resort operators say the government in Rome has been slow to understand.

No aid package has been forthcoming for the ski industry, and the situation is grim for workers. Permanent workers can be put on short-term layoffs, but such programs are not available to seasonal workers, who make up a great share of the industry's lift operators, ski instructors, mountain guides, rental shop employees and hotel and restaurant workers.

Ghezzi, the ski lift association president, is doubtful that lifts will open on Feb. 15 as currently planned.

“Unfortunately, I have to say that the season is irremediably compromised,’’ she said. “We can say the season is a total loss. If we can open in March, maybe it becomes 90% or 95%. I cannot rule out that some companies might fail.”

A March opening would give at most a month of teaching time for Giulio De Luca, who runs the ski school in San Vito, which is part of Cortina SkiWorld. He has only seen two 600-euro ($722) payments from the government since last spring — which was quickly followed by a tax bill of 950 euros ($1,143).

“In November, December and January, instructors received not one penny,’’ from the government, De Luca said. Nor has the ski school been eligible for aid so far, while rent, utility, phone and tax bills continue to arrive.

“I have the money to pay taxes now, but not next month,” he said.