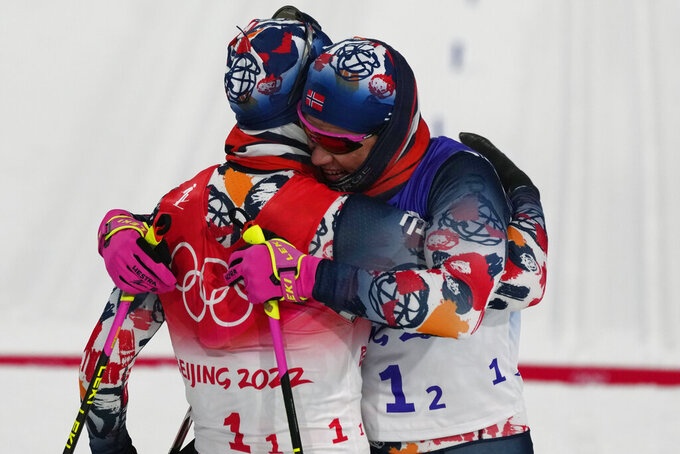 Klaebo became the first man to win both the team and individual sprint races at two straight Olympics. Bjorn Lind won both at the 2006 Turin Games but failed to repeat four years later in Vancouver.

“To do it as a team, it’s something we have been working really hard for,” Klaebo said. “We have been training together for a couple of years now and it’s an amazing feeling.”

Joni Maki of Finland stayed ahead of Russian skier Alexander Terentev to take silver, 2.46 seconds behind the Norwegians. The Russians earned bronze, 4.29 seconds behind.

Maki teamed with Iivo Niskanen, who won gold in the 15-kilometer classic race and bronze in the skiathlon.

“It was nice to get it and, well, it’s quite easy with the world’s best classic skier,” Maki said. “I’m happy with this medal.”

Terentev’s teammate was Alexander Bolshunov, who won gold in the skiathlon.

The three leaders broke away from a group of eight on the final lap. Sweden finished fourth, 15.06 seconds behind, and Canada was fifth, 22.31 behind.

In the women’s race, Carl and teammate Katharina Henning won in 22:09.85. Sundling and Maja Dahlqvist ended up second, a mere .17 seconds behind.

“It means a lot for us, also the silver medal in relay and today the gold medal in team sprint,” Henning said. “It means a lot and we are very thankful for the whole team. It’s very important for cross-country in Germany.”

The race was a bit of an upset for Sweden. Sundling and Dahlqvist finished 1-2 in the sprint race.

“It was a tough fight for me and Maja,” Sundling said. “We did all we could in the last lap, and for me when I came to the finish line, it was a really tough fight against Germany. Victoria Carl was a little bit stronger today in the end. But I’m really satisfied with my race and glad to share this with Maja.”

The Russian team of Natalia Nepryaeva and Yulia Stupak took bronze, .71 seconds behind.

“It was a good finish but also a really hard race for us,” Stupak said. “But after some years with fourth place, it’s good for us because we have a medal.”

Finland finished fourth, just ahead of the defending champion United States. Jessie Diggins, who won gold four years ago with Kikkan Randall, teamed up with Rosie Brennan for the Americans this year.

Diggins won bronze in the individual sprint at the Beijing Games.