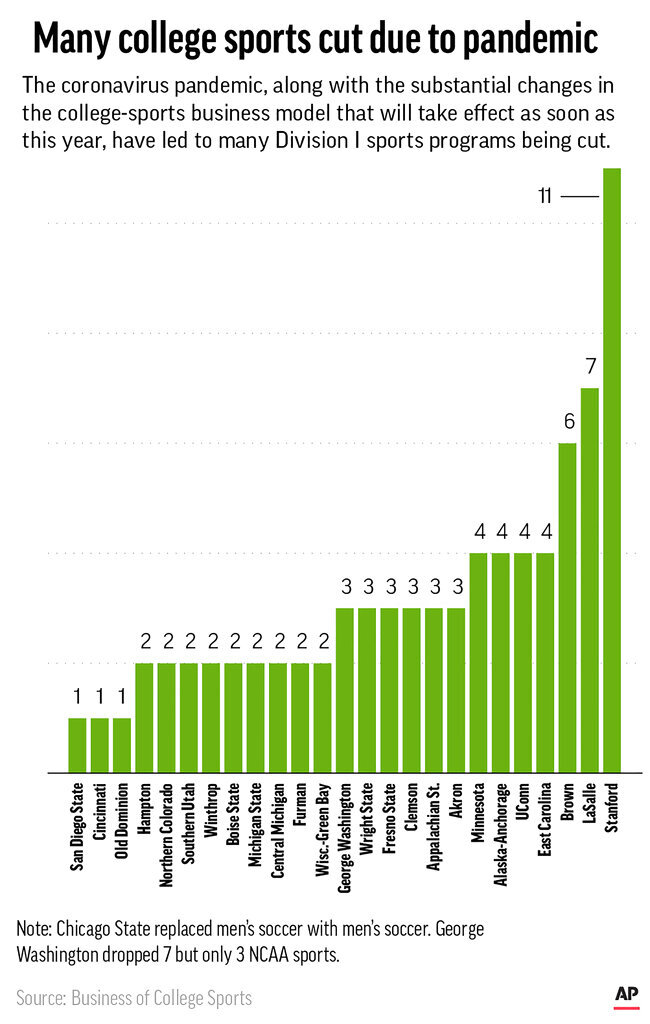 Graphic looks at the college sports that have been cut by school due to the pandemic; 2c x 5 inches

INDIANAPOLIS (AP) — It’s a point of pride that stretches across dozens of universities, many of them rivals, and all the college sports leagues, many of which compete for the same dollars and the same talent. As one banner on the Pac-12 conference's website puts it: “Olympians made here.”

The coronavirus pandemic, along with the substantial changes in the college-sports business model that will come into play as soon as this year, have led many leaders in both the college and Olympic worlds to wonder if that will still be true a decade from now.

In one question from a survey sent by The Associated Press to Division I college athletic directors across the country, nearly 65% of those who responded said “Yes” when asked if the U.S. Olympic and Paralympic Committee should pay part of the bill to the universities that run sports programs that, in turn, feed the U.S. Olympic pipeline.

At stake is a stretch of Olympic dominance that has seen the U.S. win a world-leading 678 medals in both Summer and Winter Olympics since 2000. A huge portion of that success is underwritten by a college industry that, according to one estimate, spends $5 billion a year on Olympic sports programs. At the Rio Games in 2016, nearly 80% of America’s 558 athletes competed in a college program.

“The fact that we’re one of the few countries that competes at the level we do on the Olympic stage without having government fund the program is because of college athletics and what it does to develop Olympic athletes,” said Florida AD Scott Stricklin.

Stricklin is chairing a task force that includes about two dozen leaders of major programs and conferences who are looking for ways to keep the pipeline running. The mission takes on an even greater sense of urgency with the United States poised to host its first Summer Olympics in a generation in 2028. A key question looming over those home games is whether America's colleges will be able to produce world-class athletes at the same clip they have over the past several decades.

The AP sent its survey to all 357 ADs in Division I, and received 99 responses to multiple-choice questions about their views of how upcoming changes will affect the college-sports landscape. The ADs were also given a chance to add comments, and they were granted anonymity in exchange for candor.

The Olympics question received a jarringly high number of “Yes” answers to a proposal that might not be a true reflection of what’s possible – the USOPC depends on the largesse of the colleges to develop talent more than the other way around – but rather, on how concerned the universities are about their ability to keep operating business as usual.

“I think it’s important to get the conversation going because NCAA is a vital piece in the Olympic process,” said gymnast Shane Wiskus, an Olympic hopeful who moved to the Olympic Training Center (OTC) in Colorado Springs after his college program, Minnesota, announced it would be shutting down its program.

“NCAA gymnastics has done a lot for me and I do fear that if changes aren’t made, that could go away and maybe even affect the Olympic process,” Wiskus said.

While Wiskus and other athletes who are good enough have an option to train at OTC and other centers funded by their individual sports' national governing bodies, a cut in college programs could strain that system. Before most athletes even reach that elite level, they're invested in years of expensive training and see limited opportunities for a payoff. A college scholarship has long been one of the key gateways for the fencers, gymnasts, rowers and others with an Olympic dream looming but a lack of resources to take that final step.

But most of the 85 programs cut by Division I universities since the coronavirus pandemic hit last year have involved Olympic sports. Next on the horizon are proposals being debated by the NCAA and in Congress that would allow players to cut sponsorship deals and make money off their names, likeness and images (NIL). A more far-reaching bill proposes revenue sharing between the sports programs and athletes.

Once any of these proposals go into play, it’s likely that the billions of dollars generated by the two biggest sports on most campuses, football and men’s basketball, will be further divvied up. That will leave less to be used to underwrite the dozens of Olympic sports that aren’t self-sustaining.

In a related question in the AP survey, 73% of the ADs answered “Yes" to the question: "If your school were to offer compensation beyond scholarships to students, are there any sports that would lose funding or be cut by your school?"

Most of those sports feed the Olympic team.

A few of the most striking examples of the impact dwindling funds have already had on colleges:

—Last year, Stanford announced it was cutting nine Olympic sports from one of the nation’s most prolific athletic departments; when Stanford's women's basketball team wrapped up the national championship Sunday night, it marked the 45th straight year the school has brought home some sort of title.

—The Clemson men’s track team is being disbanded.

—The sport of men’s gymnastics will lose two more programs – Iowa is joining Minnesota in shutting down – in continuing a steady decline for that sport that began well before COVID-19 hit.

“In America, the entire ecosystem is tethered back to football and basketball,” said Sarah Wilhelmi, the USOPC's director of collegiate partnerships. “The thing we need to do is lean in and look at youth, college and elite sports across the board, up and down. We need to look at other opportunities we haven’t thought of yet.”

One that almost certainly won’t work is asking the government to provide financial help. Though Congress is getting involved in shaping the look of both Olympic and college sports, the law passed in 1978 that governs the Olympic operation in the United States dictates that taxpayer money not be used to fund the team or its ancillary organizations.

“If football revenue is split with football players, that is fine,” one AD wrote in the AP survey. “But if that were the case, there is no way those other women’s sports can be sustained and the men’s sports outside of football would have to be impacted as well. We cannot have it both ways.”

It boils down to a stark reality that few people are willing to articulate: While many agree that football and basketball players are exploited for the free labor they produce to bankroll a billion-dollar industry, much of that revenue is sunk back into sports that bring gold medals back to America.

What the Olympic movement has to figure out is what to do about this relationship. Some propose linking events such as NCAA championships and U.S. national championships or Olympic trials to create more visibility and better illustrate the clear connection between the two levels.

Others see this as a time to completely blow up the college model and try to start over.

“If there’s a different way to fund elite athletes through schools that’s not coming through football, that’s great,” said Victoria Jackson, who teaches sports history at Arizona State. “But the problem now is, it’s coming through football. If they can figure out a way to have the money come from some sort of Olympic development support instead of football, that would be a good thing for everyone.”

AP Sports Writers Pat Graham and Will Graves contributed to this report.