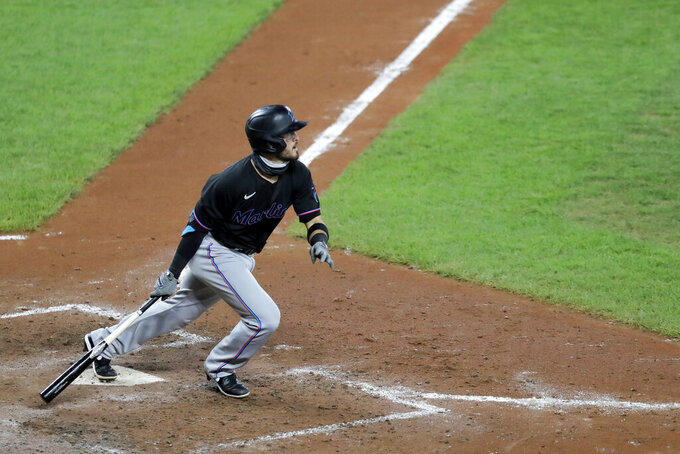 Miami Marlins' Eddy Alvarez watches a foul ball to right field during the fifth inning in the second game of a baseball doubleheader against the Baltimore Orioles, Wednesday, Aug. 5, 2020, in Baltimore. Among the Marlins' roster replacements following their coronavirus outbreak was infielder Alvarez, a 2014 Olympic silver medalist in speedskating. (AP Photo/Julio Cortez)

Miami Marlins manager Don Mattingly knew about Eddy Alvarez’s background as an Olympic medalist in speedskating, and also knew that didn’t necessarily mean he could hit a slider.

After all, Alvarez was a 30-year-old infielder still stuck in the Marlins' farm system.

Then in spring training, and again during summer camp, Mattingly had a chance to check Alvarez out. And this week, Alvarez finally reached the majors.

“I told him, it was like, ‘Eddy, it’s good to have you. You're better than I would have ever thought,'” Mattingly said with a laugh.

Alvarez put his major league dreams on hold to pursue success in speedskating, an odd choice for a youngster born to Cuban parents and raised in Miami, where ice can be hard to find.

He made the right decision, winning a silver at the 2014 Winter Games in Sochi, Russia. And this week he achieved another goal by making his major league debut.

“I've literally had dreams of that moment since I was a kid, no joke, about stepping in for my first at-bat,” Alvarez said Thursday. “But I got to skate in front of 25,000 people in an arena, and that prepared me for a future in athletics. It's pretty similar — I had the same jitters walking in the opening ceremonies as I did hearing the announcer say it was my big league debut.”

That came Wednesday, when Alvarez started both games in the Marlins' doubleheader sweep at Baltimore. He's part of the Marlins' wave of reinforcements after a coronavirus outbreak sidelined more than half their team.

A 5-foot-9 switch-hitter, Alvarez went 0 for 5 in the doubleheader. But he showed his versatility by starting the first game at second base and the nightcap at third, and he can also play shortstop.

There are no doubts about Alvarez's athleticism. He was the leadoff skater for Team USA’s Olympic 5,000-meter short-track relay team that finished second to Russia in 2014.

Then, at age 24, Alvarez resumed his baseball career. He was signed by the Chicago White Sox and spent five years in their minor league system.

“We were pretty excited when we brought him into the organization,” Marlins president of baseball operations Michael Hill said. “We wanted to see how his athleticism translated on the baseball field, and he did a great job for us in New Orleans.”

Now Alvarez is part of an improbable story with the Marlins, who have surprised observers by seizing first place in the NL East despite their patchwork roster.

Alvarez was in Miami with his significant other when he learned that after 581 games in the minors, he was being summoned to the big leagues.

“We’re expecting a baby in a couple of weeks. I kind of lost it on the couch with her,” he said. “I knew immediately I had to share the news with my parents, who live not even half a mile away from me. My bright idea was to yell at them through the window. I surprised them -- something along the lines of ‘We did it!’”

Now the challenge is to stick in the majors.

“I'm as optimistic as I possibly can be,” Alvarez said. “We all deal with our inner pessimist. I'm a firm believer that positive thinking creates positive results.”

To help with that, Alvarez will carry with him a reminder of past success. The knob of his bat is adorned with the Olympic rings.