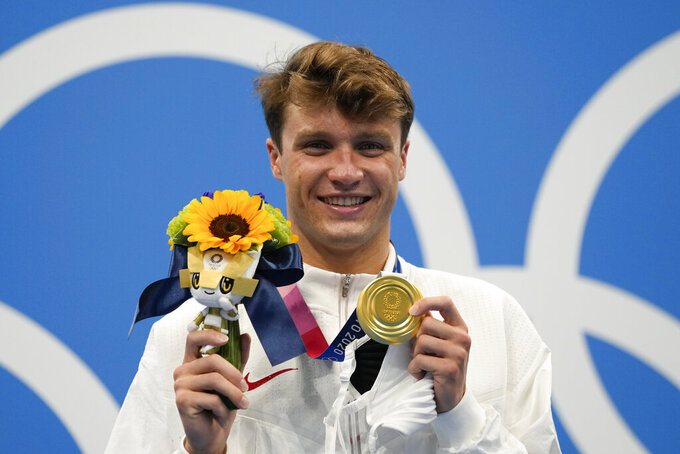 TOKYO (AP) — Bobby Finke will be the first to concede he had modest goals for the Tokyo Olympics.

He was thrilled merely to make the U.S. team in a couple of grueling freestyle events. He couldn't really envision winning a medal

Now, he's got a couple of golds.

Finke capped off his stunning emergence as the world's greatest male distance swimmer by winning the 1,500-meter freestyle Sunday, turning on his trademark finishing kick to leave the field in his wake.

He had used the very same strategy to win the 800 free, a new men's event at these games.

“I came in not really expecting to get a medal or anything — and I come out of it with two golds," said Finke, sounding as amazed as anyone.

Finke's victory signaled a resurgence of distance swimming for the U.S. men, who had not won the 1,500 free since Mike O'Brien's victory at the 1984 Los Angeles Olympics.

In the 37 years since then, the Americans had been largely excluded from the medal podium in pool racing's longest event, limited to a couple of silvers and a single bronze.

More of the same was expected in Tokyo, but Finke peaked at just the right time. As much as anyone, he took advantage of the games being delayed a year because of the coronavirus pandemic.

Finke began shaving off huge chunks of time, featuring a finishing kick that no one could match.

In the 800, he was fourth at the final turn but stormed past everyone to capture the gold.

He used a similar strategy in the 1,500, lingering close to the lead throughout the 30-lap race before revving into another gear at the end.

“I was confident in my ability to come home," Finke said.

He covered the final 50 in a stunning 25.78 seconds — a full second faster than silver medalist Mykhailo Romanchuk of Ukraine and nearly 2 seconds ahead of bronze medalist Florian Wellbrock of Germany.

“I was basically just trying to stay with Florian and Romanchuk throughout the whole race and I knew from the 800 I could switch gears," said Finke, whose winning time was 14 minutes, 39.65 seconds. "I just tried to do my best and start sprinting.”

Wellbrock had hoped to build a bigger lead on Finke early in the race.

The German knew he couldn't catch him at the end.

“His last 50 is much faster than my 50, so I tried to hold the speed at a high level," Wellbrock said. “It didn't work. He did a really good job on the last meters.”

Finke seemed a bit overwhelmed by his sudden fame.

“Honestly it doesn’t seem too real,” he said. “I came in not expecting to medal and just do my best to make the finals. To come out with two golds, it means the world to me and my family and my teammates.”

The 21-year-old Finke can't wait to get back to his home near Tampa, Florida. He'll hug his family and be reunited with a furry friend.

“I am looking forward to taking my dog Brewster and walking him around,” Finke said. “I haven’t had time to do that since Christmas.”

Finally, he can slow down.