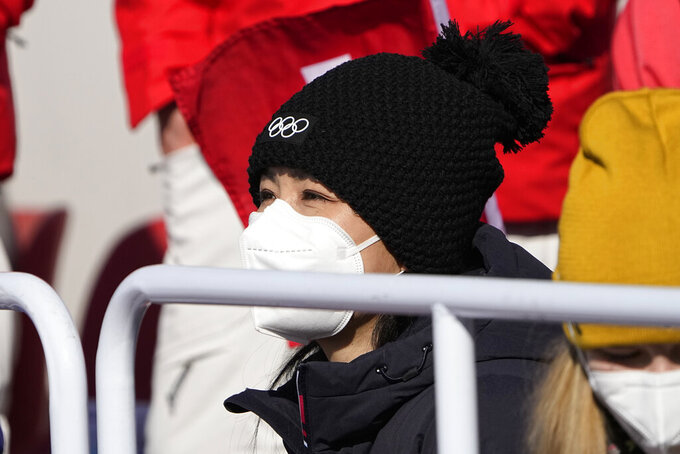 Peng appeared a day after delivering a controlled interview in Beijing that touched on sexual assault allegations she made against a former high-ranking member of China’s ruling Communist Party. Her answers — delivered in front of a Chinese Olympic official — left unanswered questions about her well-being and what exactly happened.

Bach said he and Peng spoke with athletes at the Big Air Shougang venue for about 30 minutes, and the pair was seen together in the stands.

Bach said Peng told him that she was going into quarantine later Tuesday and planned to exit the closed Olympic coronavirus bubble. He was not sure if she planned to return for any more Olympic events.

Peng, a local star who has encouraged Chinese girls and women to take up tennis, watched as Gu formally ascended to a similar position with her first Olympic gold medal.

An 18-year-old born in San Francisco, Gu decided in 2019 to compete for China at the Beijing Games, spurning Team USA in the process. Gu, whose mother is Chinese, has said repeatedly that her goal is to be a role model for young female athletes in China.

Gu sidestepped a question about whether she shared concerns from the international community about Peng's well being. She said he was “really happy” Peng attended and honored that a star from a major sport like tennis came to see “niche sports like freeskiing.”

Peng’s interview with French sports newspaper L’Equipe and an announcement that Bach met Peng for dinner this weekend seemed aimed at allaying sustained international concerns about the three-time Olympian and former No. 1-ranked tennis doubles player. Fears for Peng’s safety have threatened to overshadow the Winter Olympics in Beijing.

Peng told L’Equipe that the concerns were the result of “an enormous misunderstanding.” But the format of the interview appeared to limit follow-ups about the allegations and their aftermath.

L’Equipe asked Peng about sexual assault allegations that sparked the controversy in November. The allegations were quickly scrubbed from her verified account on leading Chinese social media platform Weibo. She subsequently dropped out of public view for a while. That led to “where is Peng Shuai?” questions online and from players and fans outside of China, in part because the country has a history of disappearing people who run afoul of its leaders.