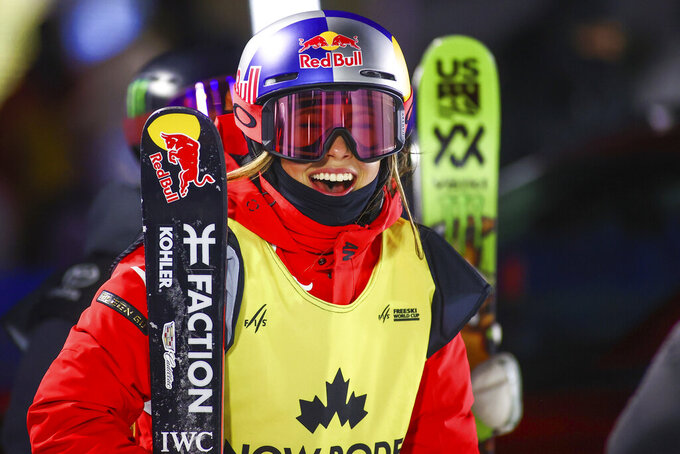 FILE - China's Eileen Gu smiles following her final run during the World Cup women's freestyle skiing halfpipe final Jan. 1, 2022, in Calgary, Alberta. American-born daredevil Gu will be trying to win gold medals for China at the Beijing Games. Gu's mother is from the host country and the 18-year-old freestyle skier made the decision to compete for China instead of the United States. (Evan Buhler/The Canadian Press via AP, File)

ZHANGJIAKOU, China (AP) — Eileen Gu was 8 when she started teaching young wannabe daredevils how to do backflips on trampolines during her summer visits to China.

“Back then, I would meet essentially the entire Chinese ski community at once,” Gu said. “There just weren't that many people.”

In the tricky, sometimes unpleasant discussion about why this 18-year-old freeskiing force of nature who was born and raised in San Francisco is competing for her mother's homeland of China at the Beijing Olympics, the most straightforward answer might just be hidden in that vignette.

Not that long ago, hardly anybody skied in China. These days, with the Olympics showcasing a whole new world of winter sports to the country of 1.4 billion, more people do. Girls, long marginalized, including in a sporting sense here, could really use a role model. Gu thinks she could be just the person.

“In the U.S., growing up, I had so many amazing idols to look up to,” she said in a wide-ranging interview with The Associated Press last winter. “But in China, I feel like there are a lot fewer of those. I’d have a much greater impact in China than in the U.S., and that’s ultimately why I made that decision.”

But there are no simple answers to any facet of a discussion involving relations between China and the United States, and why an athlete with options might choose one over the over. Meanwhile, a lot has changed in China in the 2 1/2 years since Gu made her decision — and in the way the rest of the world perceives it.

China's human rights record has triggered a diplomatic boycott and become a focal point of the Games themselves. The well-being of tennis champion Peng Shuai is an ongoing concern. COVID-19 protocols have turned these Olympics into a closed-off affair filled with strict testing protocols. Critics say that by competing for China, and not the United States, Gu is, at the minimum, tacitly supporting the Communist government's policies and turning her back on the team that helped her rise through the ranks.

“There’s something endearing and noble about her interest in promoting her sport to the world’s most populous country, and promoting herself as a strong female role model,” said Chad Carlson, who teaches about sports and society at Hope College in the U.S. “Every action has consequences, as well. This isn’t a usual transnational path. To go from an American athlete to a Chinese athlete just isn't that common a roadway.”

Because of the baggage surrounding that decision, Gu has kept her media availabilities this winter to a minimum, and kept them tightly focused on the mission ahead — skiing. On Thursday, she did post an essay on Instagram, explaining her decision.

“I’ve always said my goal is to globally spread the sport I love to kids, especially girls, and to shift sport culture toward one motivated by passion," she wrote, in part.

In the conversation with the AP at last year's Winter X Games, she also opened up about her choice to compete for China — one she started receiving flak for almost the instant she made it.

“I've gotten a lot of hate, a lot of people saying ‘It’s a question of loyalty and which country she likes more,'” Gu said. “It's really not. It was really a big thing between the impact I would be able to have and what I'd be able to do with skiing.”

Another thing it certainly was not was a search for an easier path to the Olympics.

Gu had a firm spot on the U.S. freestyle team when she made her decision. She won gold medals in halfpipe and slopestyle at the 2021 Winter X Games and a bronze in big air. Since the start of this season, she has won four halfpipe contests, one in big air and finished second in her only slopestyle start. It's no reach to think she could be the first action-sports athlete to win Olympic gold in three separate events, starting with the big air finals on Feb. 8.

“She’s unbeatable when she lands even her ‘B’- or ‘C’-level run right now," U.S. coach Mike Riddle said. "If you’re trying to bet against her, it’s a bad call.”

All of which has more than put Gu on the map in a country that loves its sports stars. Former NBA center Yao Ming is still a national hero. Hurdler Liu Xiang won a gold medal in 2004 that turned him into the poster child for the 2008 Beijing Olympics.

At last count, Gu — whose Chinese name is Gu Ailing — had 1.34 million followers on the Chinese social media platform Weibo. She is racking up sponsors — at least 23 by the AP's count — and is finding support in a country that has captured a grand total of 13 gold medals in the history of the Winter Olympics but only one of those on snow.

No matter how she does over these next two weeks, her future upon heading home from China appears bright.

She has had covers on In Style and Vogue magazines. “I love the sound of camera shutters,” she said.

She is set to go to Stanford later this year, with a possible major in international studies in the offing.

She's a strong musician, and something of a ham at heart. “When you see the piano in the airport, and there's a kid sitting there playing it, that's me,” she said.

She is well-spoken in two languages. Her fluency in Mandarin is the result of being raised in part by her grandmother, who does not speak English.

She is also, undoubtedly, on her way to being rich, which might be the case regardless of which country's colors she is wearing this month. That punches a hole in the argument that she made the move simply for the money. But the decision was always more complex than that.

“She's stepping into this because she says she wants to be a role model for young girls, but in terms of the social issues having to do with America criticizing China, she’s not stepping in to answer for those particular issues,” Carlson said. “It's unique because in the current climate we're in, we have a lot of athletes who are stepping into that willingly without even being prompted.”

Instead, the social issue she cares about most is trying to help girls connect with sports. Anyone who thinks she's just arriving at this party could be pointed to the Adidas commercial that features a speech she gave in seventh grade about women's equity in sports.

“Some people retire with 10 gold medals and then they're 30 years old and don't know what to do," Gu said. "But I want to be able to have those medals and to be able to feel like I changed someone’s life, or changed the sport, or introduced the sport to a country where it wasn’t before.”